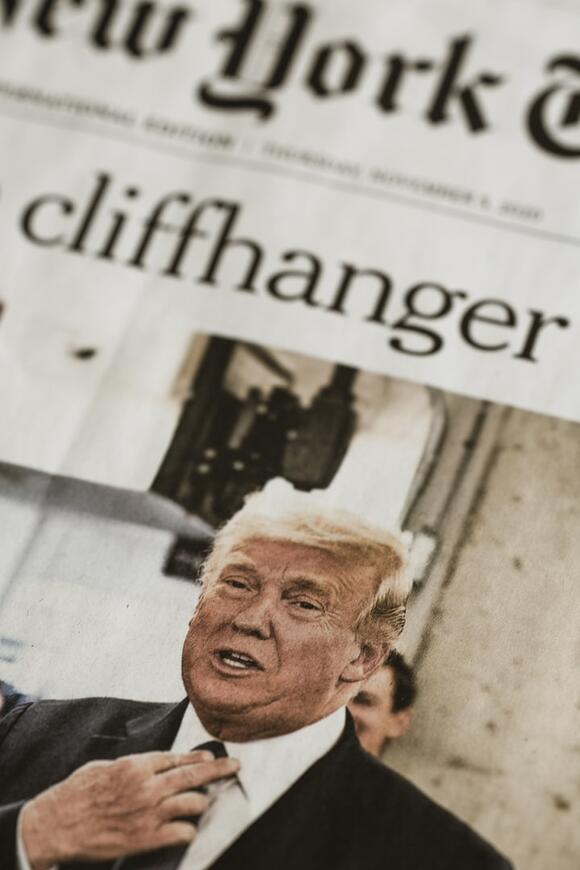 While news media and social media alike buzzed frenetically with the seemingly earth-shattering news that Tesla titan Elon Musk had agreed to purchase Twitter — the wildly popular social media platform boasting over 200 million daily users— for a whopping $44 billion, another social media app has quietly slipped into the #1 spot downloads from the App Store.

In a shocking twist that has left establishment media and its reverent followers stupefied, former President Donald J. Trump’s Twitter-copycat app Truth Social is now standing strong at the number one spot in the Apple Store, with millions of former Twitter users switching allegiances in order to to escape Twitter’s daunting algorithm rife with shadow-bans and suppression of alternative political voices.

As far as the app itself, it does appear strikingly similar to Twitter, with tweets rebranded as “truths” and retweets as “retruths.” Upon his return to social media, the former President triumphantly posted “I’M BACK! #COVFEFE, prompting users across the world to wonder: What the hell is Covfefe?

The phrase, first used to ridicule a supposed Twitter typo in one of Trump’s characteristic tweets, has been denied as such by Trump’s camp. Cryptically, former White House Secretary Spicer had told press at the time:

“The President and a small group of people know exactly what he meant.”

As of most recently, the former President has been “retruthing” videos of him appearance at his most recent Save America rally in Greenwood, Nebraska, an event which drew thousands upon thousands of American citizens seemingly deeply disgruntled with the current administration’s astronomical gasoline prices, skyrocketing inflation, creeping food shortages and daunting unemployment numbers.

With numbers on Truth Social shooting up daily, mainsteam media’s premature declarations that the app is a “disaster” are yet again leaving them feeling displaced and out-of-touch. One popular business columnist on Medium had even branded the app, back in March, as a “failure” and a “huge flop.”

At the same time that Truth Social is dominating the social media charts in spite of misleading mainstream predictions of utter failure, new Twitter owner Elon Musk is likewise hitting back at mainstream narratives, utilizing his Twitter account to viciously dissect NBC’s treatment of dissenting political opinions. In backlash against one NBC reporter’s inflammatory assertion that Republicans are “Neo-Nazis” he subtweeted NBC to blast them for a precise litany of corruptions, writing:

Other public figures, meanwhile, are terrified by the idea that Elon will change the current climate of ‘decency’ at Twitter. According to Alexandria Cortez-Ocasio, U.S. Representative and avid tweeter renowned for her occasionally bombastic rhetoric, there will be an “explosion of hate crimes,” Other similarly-inclined politicians have followed suit, with U.S. Senator Elizabeth Warren even calling the new Twitter “dangerous for democracy.”

Is freedom of expression actually a grave danger to freedom itself? Perhaps Twitter vs. Truth Social will show us the answer.

More from Surviving in Austin, Texas

Accompanying Austin’s astronomical business growth in the past few years is a newly minted startup investor community aimed at catering specifically to the dual needs of local investors and the greater venture community.

Last Grill & Chill on the Lawn at Magdalena House

May's Grill & Chill On the Lawn is coming to an end with the very last Tuesday of the month. Now is your last chance to catch the classic cookout at Hotel Magdalena downtown, a popular local tradition involving unlimited grill eats, wine flights and grass-friendly lawn games.

Families in central Austin are banding together to offer continued financial aid and emotional support for Afghani refugee families who fled their war-torn nation last summer. One co-creator of the GoFundMe account recently introduced the initiative via local social media forms:

Esme Bianco and Marilyn Manson pose together during better times.Pexels. The latest news in the ongoing battle between the self-proclaimed 'Prince of Darkness' and a tribe of actresses suing him for sexual assault comes from one such alleged victim.

Kardashians sitting in court as trial debates their guilt in "conspiring" against Rob's ex-fiancee.Pexels. Businesswoman Blac Chyna's long-awaited trial against the Kardashians has ended after nine days in court and lengthy jury deliberation.

A slew of criminal charges alleging widespread embezzlement of federal funds has shaken the Houston Independent School District to its core, and now Chief Operating Officer (COO) Brian Busby, a decades-long veteran of HISD who has been overseeing the nation's seventh largest school district since the end of 2016, faces additional charges related to his many-pronged bribery scheme.

A South African mother and business owner named Juliette Bryant is one of the latest former victims of Jeffrey Epstein to come forth publicly with details about the pedophile financier’s relationship with former U.S. President Bill Clinton, also husband to 2016 Presidential candidate Hillary Clinton.

A&E docuseries Secrets of Playboy is exposing the horrific secrets behind the sexual liberation icon and Playboy founder Hugh Hefner, who passed away in 2017 and left behind a crumbling pornography empire.

Before my daughter started second grade, she was a voracious reader. She devoured the Harry Potter novels, one by one. Nestled in a corner of her room, she let her imagination run wild for hours at a time.

Heyoka: The Most Powerful Empath

The term has Native American roots, stemming from the Lakota branch of the Sioux tribe, today confined to 5 large reservations in the Dakotas. Heyoka translates to “sacred clown” and refers to those members of tribal society chosen for public roles not dissimilar to court jesters, thanks to their unusual talents.

5 Texas Serial Killers You Should Know About

Are you a true crime aficionado? Are you fascinated by sadistic serial killers? Do you want to know about the darker side of Texas history? Listed below are five of the goriest, most chilling real-life murders in the Lone Star State and beyond.

Just twenty or so miles East of the Austin-Bergstrom International Airport is Bastrop, Texas, a still-small city whose local economy has seen rapid economic growth in the past few years. Unfortunately, the city is also grapplying with a child sex trafficking crisis that has been directly tied to multiple perpetrators employed by the state’s crumbling foster care system.

How The US Military Created Software used by Child Traffickers

Special Agent Daniel Alfin was the leader of an investigation into one of the world’s largest pedophile rings on Tor. But did his Army counterparts enable these same child predators?

18-year-old Tom Brown had it all: he was both class president and school football star, liked by everyone in the Texas Panhandle town of Canadian. Well, almost everyone. He disappeared the week of Thanksgiving in 2016, his remains not found until a couple years later.

The National Association of Practising Psychiatrists. The Texas Governor and Texas Attorney General recently joined forces to establish the groundwork for new legislation that would, at least in theory, protect children with gender dysphoria from child abuses ranging from medical and psychiatric malpractices to household psychological abuse.