My children will tell you that I’m the queen of trite and clichéd remarks, so I’ll try not to disappoint. "You can take the girl out of the city, but you can’t take the city out of the girl.” So was my thought Friday afternoon as my husband and I exited the Lincoln Tunnel into Manhattan. While I could feel his angst when I told him our plans, I was excited. He is a country boy. Cherishing our rural lifestyle in the Poconos doesn’t preclude me from occasionally missing stomping around Manhattan, where I frequented on "skipped school” days while in high school. 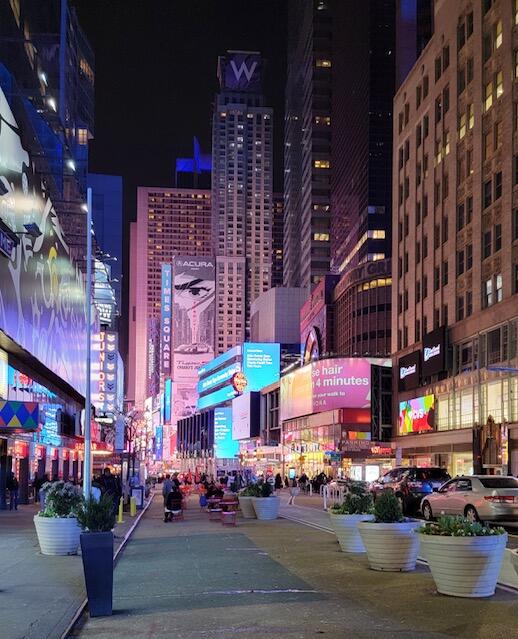 Having stayed away these past two years, I couldn’t wait to meet my brother and his girlfriend for dinner at Ruth’s Chris, after which we would head to Radio City Music Hall for Josh Groban’s Great Big Radio City Show. New York did not disappoint. As we strolled to the eatery, the smells of street foods filled the air, and the hustle and bustle of folks going to and fro energized me. As my partner lagged, I became, once again, a native New Yorker, able to navigate a crowd easily.

Sitting for dinner, I was amazed. There was no lack of staff, as we hear lately. Instead, there were dozens of well-dressed servers, attentive and friendly. This mid-town eatery, a short block from Radio City, provided excellent cuisine in a comfortable yet elegant atmosphere. From appetizers to desserts, the food was delicious, brought to the table by professional and friendly staff. Josh Groban’s performance was delightful, inspirational, fun-filled, and heartwarming.

He regaled the audience with humorous anecdotes about two years of isolation before launching into one of the most relaxing, relevant, and enjoyable shows. His interaction with the guests showed an artist with great self-confidence yet unabashed humility. You have to like him. He doesn’t give you a choice. His warmth was evident as he introduced several guest celebrities, promoting their talents and sharing their stories. It was refreshing to see and glimpse other skills, such as Hollywood Anderson, a former American Idol contestant with several albums and successes, Denee Benton, the star of HBO’s The Gilded Age, and Josh’s co-star in the Broadway show Natasha. Henrik Lundqvist, former NY Ranger’s goalie, accompanied Josh on guitar as he sang U2’s One to a packed house of mesmerized listeners. It was thrilling to hear She from the Notting Hill soundtrack, a favorite among romantics. The undeniable uplifting talent and the inspirational music and lyrics, along with the extraordinary orchestral talent, made this a performance not to be missed.

For me, there was no better way to re-emerge into the exciting world of the "city that never sleeps. "

If you have a story to tell or would like to submit a news tip to The Stroudsburg Herald, Click here.

The Castle Inn has had many lives since it was built in 1906. Perhaps one of the most important was the part it played in the shaping of music history. Those who appreciate music will be fascinated by the past of the castle inn by hosting The Waring Music Workshops for 20 years. It moved to Penn State.

A client had paid in full months ago and was not picking up the project or responding to mailing instruction requests. I knew where his father-in-law lived, so, on a clear sunny day, I decided to hop in the convertible and leisurely head down a beautiful country road for special delivery.

“A Taste Of Wayne” | Newfoundland Library To Host Community Event

Newfoundland, PA: On May 21st, 2022 from 1-4PM, the Newfoundland Area Public Library is hosting "A Taste of Wayne," a community celebration of local wineries, breweries, artisans, restaurants, musicians, and more. A winery and brewery tasting stroll along the beautiful Carlton Drake Memorial Park nature trail in Newfoundland will be available with a $25 "Passport" ticket purchase. Food trucks and live music will be available for all park visitors, and the Newfoundland Farmer’s Market will be open longer hours with additional vendors and artisans. "A Taste of Wayne" hopes to support growth in our local businesses, spotlight a beautiful local park, and to raise money to support the library and new projects to enrich the greater Newfoundland area.

One of my favorite delights is going out to a restaurant for a nice meal. With lockdowns and mandates, takeout was the rule of the day. We did a lot of ordering to help businesses remain solvent.

May 16, 2022 - Hawley, PA: Nearly 16 years ago this June, The Lodge at Woodloch first opened its doors. The luxurious spa resort was designed as a destination like no other in the Northeast. The intent was to create a wellness respite for guests to find a personal awakening through discovering stress-relieving outlets to help them along their wellness journeys. The well-regarded spa experts and ownership team carefully selected the land, overlooking a 15-acre lake and naturally occurring cranberry bog knowing that Hawley, Pennsylvania was a perfect location, providing easy access from New York City, Philadelphia, and other major cities.

Celebrated in the United States on May 1 and throughout May, Law Day has become an integral part of the legal culture. President Dwight Eisenhower proclaimed Law Day on May 1, 1958, to honor the role of law in the creation of the United States of America. Congress later passed a joint resolution establishing May 1 as Law Day.

Monroe County local Richard Lesh always found himself in the right place at pivotal moments in history:. • Weathering a hurricane in the famed Bermuda Triangle as a young sailor, his ship was tossed about and nearly lost at sea.

The "Get Outdoors Poconos" series invites the public to hike Buck Hill's private trails! The Brodhead Watershed Association is privileged to obtain exclusive access to this one-time event.

Rimrock Masonic Center To Host All You Can Eat Spaghetti Dinner

Giving back to the community is an integral part of the Brotherhood of Freemasons. So who are the Freemasons? Some in our area are not familiar with this historical fraternity.

Being in the entertainment business for so many years, I've had the opportunity to meet many people from various backgrounds. At times, a unique character will stand out from the rest for their authenticity and uniqueness. This is the case of Judy Torres, whose talent, work ethic, and resilience make her as memorable as she is lovely.

My wife met a lovely lady at the store, and they talked about family, faith, compassion, and home additions. We accepted an invitation to her house for coffee and a chance to meet her husband. He buzzed us in through the large gates that surrounded his empire. He told me he had a successful career in the construction business and was semi-retired, but that he missed work and was often fighting depression and loneliness.

In Honor Of Mother's Day | Explore The Poconos With Your Mom

Mother's day is just around the corner. Did you almost forget? Your mom can be your best friend or not, but there are always moments and memories to cherish. Having a mother or a mother-like figure in our life is truly an honor.

According to an April 22, 2022, article in the New Jersey Herald, NJDOT held an internal committee meeting to discuss advancing a project to study "damage to a retaining wall that supports a raised section of Route 80, near the Delaware Water Gap". According to the meeting's agenda, the wall may be"subject to sudden failure".

Culture And Passion Inspire Fusia Center For The Arts

The early years from birth to five are critical to the well-being of our children, families, and community. 90% of a child’s brain develops by age 5. This development is influenced by many factors, including a child’s relationships, experiences, and environment. The COVID-19 Pandemic Report Survey from the Early Learning Investment Commission and the Pennsylvania Chamber of Business and Industry that surveyed businesses about their workforce found that 54% of employers lost employees due to a lack of childcare. Pocono Mountains United Way surveyed childcare providers in Monroe County where it was determined that the pandemic has affected their business, staff, and children in their care. 77% of eligible children in Monroe County do not have access to high-quality funded Pre-K. Childcare providers struggle to hire and retain quality employees.

According to Parkvault, water parks made their appearance in the United States in the late 1940s and early 1950s. However, George Millay gets credit for opening the first official water park, Wet & Wild, in Orlando, Florida, in 1977. (Water park.com)

It was a beautiful Stallion White 69 Camaro with headers and a big block engine. There were two cotter pins on the hood to keep all of that horsepower from busting out of the front of the car.

The media and the government focus the most on female victims of domestic violence, despite almost equal amounts of abuse occurring against men by women. Women commit violent acts against men daily without making the news. They humiliate them and threaten their safety and the safety of their children.