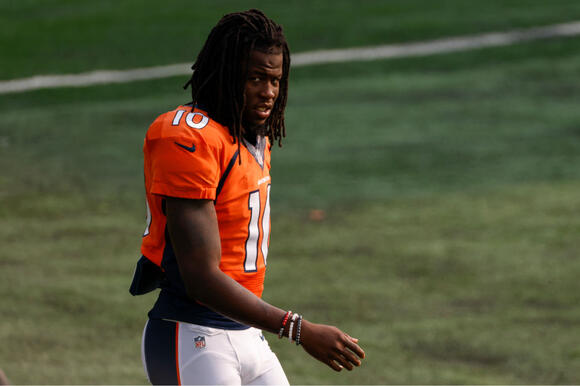 Wide receiver Jerry Jeudy #10 of the Denver Broncos walks on the field during a training session at UCHealth Training Center.(Justin Edmonds/Getty Images)

Welcome to another Tuesday edition of the Denver Daily Roundup. May will finish off in Denver with possible wet and cloudy conditions.

Without further ado, let's take a closer look at a few of the top, local stories from in and around the Denver metro this Tuesday:

A motion to dismiss the tampering charge against Denver Broncos receiver Jerry Jeudy was filed by prosecutors Tuesday morning before a scheduled court hearing in the case, according to a spokesperson with the 18th Judicial District Attorney's Office.

Denver7 reports Jeudy was set for an arraignment Tuesday afternoon in the case after his arrest on May 12 when he was charged with one count of second-degree criminal tampering. Jeudy was arrested after arguing with the mother of his child and placing her wallet, baby formula and their child's medical paperwork in his car and locking it, sheriff's office documents show.

Harvey Steinberg, Jeudy's attorney, said following the hearing earlier this month that he would be surprised if the case advanced farther after the initial hearing.

2. Aurora is short on lifeguards, the ‘last best defense,’ and they’ve had to adjust public pools hours

Many public pools across the Denver metro have been forced to alter their hours or even close for the season due to a shortage of lifeguards.

In cities like Aurora, all six outdoor pools opened for the weekend. However, they have had to adjust their hours of operation, with some set to only open on certain days of the week due to the lifeguard shortage, CBS Denver reported.

3. How the Denver Zoo is helping Ukrainian animals

The Denver Zoo has raised $50,000 from 865 individual donations and is giving those funds to three organizations across Ukraine.

The raised money came from a Wildlife Emergency Fund launched in Mach by the Denver Zoo to assist zoos in Ukraine impacted by Russia's war, according to NewsBreak Denver's Brittany Anas. The donations have been distributed among Kyiv, Cherkassy and Odessa Zoos to aid them in caring for animals under dangerous and difficult conditions.

Ukrainians of Colorado have provided assistance to the Denver Zoo which helped build connections with zoo leaders in Ukraine and helped transfer funds to those organizations.

9News reports RTD initially entered its first corporate sponsorship in 2014 as part of its naming rights program, on the A-Line. This was its first commuter rail line. RTD said on Tuesday it is currently seeking corp[orate partners looking to take part in naming rights opportunities on RTD services, including the A-Line.

According to data from RTD, 1,548 A-Line trips have been canceled since January, with 80% of those occurring due to a second crew member not being available to be on the train.