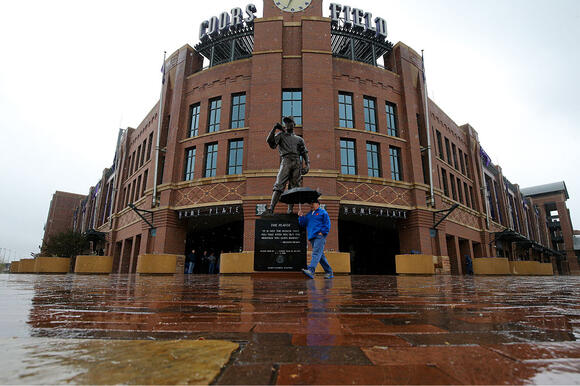 A fan walks outside of Coors Field as the rain falls.(Justin Edmonds/Getty Images)

The high-temperature Tuesday will reach near 86.

Expect southwest winds at 5 to 13 mph to become north to northeast in the afternoon. Wind gusts could reach as high as 21 mph.

The National Weather Service in Boulder predicts a 20 percent chance of rain showers and thunderstorms after 1 p.m.

A few storms north and east of Denver might become intense.

Tuesday evening in Denver will consist of another possibility of wet conditions, with a 20 percent chance of showers and thunderstorms.

The weather service predicts mostly cloudy skies, with a low temperature of around 52.

Expect northeast winds at 9 to 14 mph to become light and variable. Winds might gust as high as 22 mph.

Looking Ahead: The increased possibility of showers and T-storms Wednesday, cooler temps

Wednesday in the Mile High City will consist of wet and cooler conditions early in the morning.

The skies over Denver will be mostly sunny Wednesday, with a high temperature near 79. Expect light and variable winds becoming east to southeast at 5 to 10 mph in the afternoon.

There is a 40% chance of precipitation.

A 40 percent chance of showers and thunderstorms is anticipated before 7 p.m., with partly cloudy skies over Denver.

The low temperature is expected to drop to around 55 Wednesday evening. Anticipate southwest winds at 7 to 10 mph, with gusts potentially reaching as high as 16 mph.