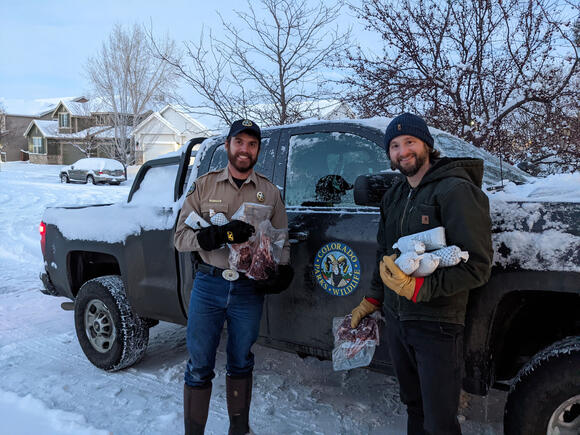 Wildlife officer Sam Peterson (left) poses for a picture with Fleetwood Mathews (right) after donating elk meat to him on Friday, Jan. 28.(Photo courtesy of Colorado Parks and Wildlife)

(LOUISVILLE, Colo.) After the Marshall Fire destroyed Fleetwood Mathews’ Louisville home, he worked to recover from his monumental loss and restock his freezer.

Mathews moved to Colorado from Connecticut in 2002 to attend the University of Colorado. He started bowhunting seven years ago and became so skilled he and his wife switched to a more sustainable lifestyle, according to Colorado Parks and Wildlife.

Mathews reached a point where he did not have to purchase "any commercial red meat." Instead, he hunted elk and bought beef directly from a Colorado rancher. When the Marshall Fire destroyed his home, it also claimed two freezers containing meat he planned to feed his family.

Mathews later emailed Reffel asking whether he could get a reprint of his late-seaon elk hunting license so he could restock his freezer. After they got the email, wildlife officers quickly realized how they could help.

They gave Mathews an elk carcass seized after an illegal hunt. CPW donates salvageable game meat to people in need.

So, wildlife officer Sam Peterson delivered a whole elk to Mathews on Jan. 28

Peterson, who responded to the fire, called the day apocalyptic and sympathized with people who lost their homes.

"When I heard a hunting family was looking for a helping hand, that was on the front of my mind a lot. I’m really happy to have had the opportunity to help out such a nice and deserving family.”

The Mathews home sat on an acre, with a full archery range and two freezers that stored not only the elk Fleetwood harvested in September but some beef from a local ranch.

When Mathews returned after the fire, he only found burnt freezer frames and metal remains of his archery targets. Mathews said his home "looked like a warzone,” with only ash and twisted metal left.

After spending a few minutes looking at the remains of the freezers, he found burnt bones and elk knuckles that he intended to use to make beef broth.

He was saddened not only by losing food for his family, but also by the memories of how he obtained the meat.

The fresh meat donated by CPW will help his family, Mathews said.

I’m beyond pumped," Mathews said. "My mom is cooking the neck roast as we speak – she was just as excited as I was to get it. It’s going to feed everyone in the family in 2022.”