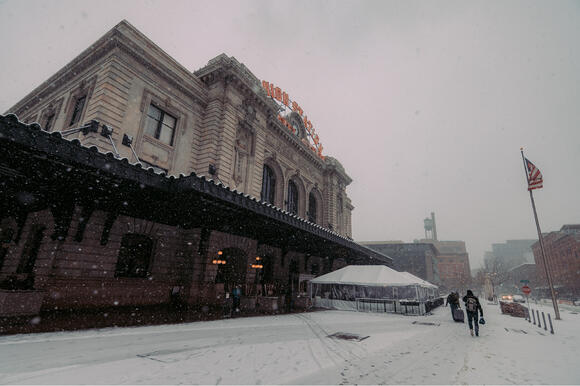 The National Weather Service in Boulder predicts Wednesday's high temperature will be around 16, with wind chill values dropping as low as -3. Expect northern winds at 7 to 10 mph, with gusts up to 16 mph.

Snow-covered roads are expected to make travel dangerous. Expect a 100 percent chance of precipitation and a total daytime snow accumulation of 1 to 3 inches.

The weather service upgraded the Denver metro to a winter storm warning early Wednesday morning that is in effect until midnight due to a continual band of heavy snowfall. However, the band decreased around 7:30 a.m., with Denver expected to see light snow throughout the remainder of Wednesday.

The weather service forecasts a 40 percent chance of snow Wednesday evening, mostly before 9 p.m. The low temperature in Denver Wednesday evening will drop to about -4, with wind chill values dipping as low as -12.

The skies will be cloudy over Denver Wednesday evening and will become partly cloudy throughout the evening. Northern winds at 5 to 8 mph will become light. Expect patchy fog after 3 a.m.

Thursday in Denver will be cold and sunny, with temperatures reaching 22 and wind chill values dropping as low as -15. Expect patchy fog before 9 a.m. Southern winds around 5 mph will become light Thursday afternoon.

The weather service predicts mostly clear skies in Denver Thursday evening, with a low temperature of about 3 degrees. Wind chill values Thursday evening will drop as low as -8. Expect southern winds at 3 to 6 mph.