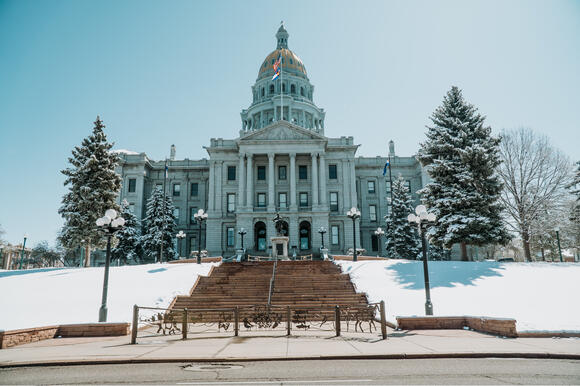 Wednesday will be dry and sunny in Denver, with more snow expected Thursday.(Shelby Ireland/Unsplash)

The National Weather Service in Boulder reported a total of 4 inches of recorded snowfall Tuesday at 12:57 p.m. in the Mile High City, with 5 inches recorded at Denver International Airport by 11:15 a.m. Tuesday.

While the Denver metro should remain clear Wednesday, morning commutes in areas including Weld and Morgan Counties and low-lying areas of the plains are impacted by dense fog.

The dense fog can be a travel hazard, causing reduced visibility.

The weather service predicts Wednesday's high temperature will be around 42, with south to southwest winds at 6 mph. Expect mostly cloudy skies in the Mile High City early Wednesday evening into Thursday morning.

The low temperature in Denver Wednesday will drop to about 19 degrees. Expect calm southern winds around 6 mph after midnight.

Thursday in the Mile High City will be likely snowy and cloudy, with temperatures reaching 31 degrees. Expect north to northeast winds of 6 to 10 mph.

A quick-moving storm system Thursday will move across the front range and Denver metro, with snowfall expected to be light. Some areas may accumulate higher snowfall amounts under heavier snow bands.

Expect some impacts to travel Thursday.

The weather service predicts mostly clear skies Thursday evening, with a low temperature of about 12 degrees. There will be a 70% chance of precipitation, with a new snow accumulation of 1 to 3 inches.