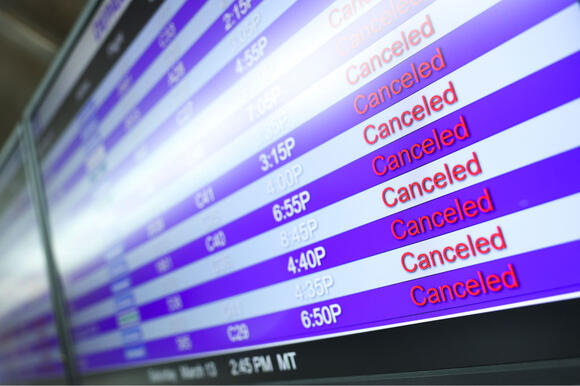 (DENVER, Colo.) A total of 126 flights were canceled at Denver International Airport as of 3:10 p.m. Tuesday due to a snow storm earlier in the day. Snow delayed another 291 flights.

"We can certainly say that our snow teams are fully staffed to clear runways and roadways throughout the storm. Both delays and cancellations are an airline decision," said Stephanie Figueroa, airport public information officer.

"Our number-one recommendation for passengers is to check their flight status with their airline before heading to DEN. Also, it’s important that passengers give themselves plenty of time to get to the airport since roads may be slick."

The National Weather Service in Boulder reported the airport received 5 inches of snow by 11:15 a.m. Tuesday.

Xcel Energy reported a power outage Tuesday at 7:27 a.m. around Smoky Hill Road and Buckley Road, affecting 5,786 customers, according to The Denver Post. The initial outages lasted about an hour, with 2,681 customers' power being restored after an hour and a half.

Denver Public Schools announced Tuesday at 1 p.m. that all athletics and practices, plus after-school programs, were canceled due to weather conditions.