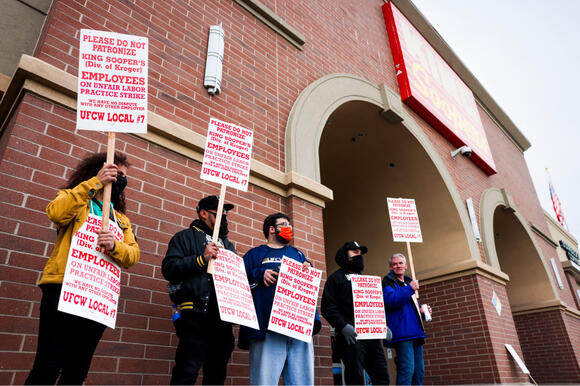 King Soopers grocery store workers walk the picket line as they strike at more than 70 stores across the Denver metro area on Jan. 12, 2022.(Michael Ciaglo/Getty Images)

"It's my livelihood, as it is for a lot of other people. For me, I hope it's great and gets more people in the door, and we're not so short-staffed all the time having to work seven days a week," said Adam Heir, Grocery Manager at the King Soopers located at 3600 Table Mesa Drive, in Boulder.

"I hope for me it brings a more work-life balance."

Heir, an employee at King Soopers for 14 years, has not worked much lately after the store postponed its reopening due to the strike. The store closed in March after ten people were killed in a shooting spree. It has been undergoing renovations for the past few months.

Heir now works as a part-time vendor and merchandiser for Pete's coffee at King Soopers in Aurora, Boulder, Denver, Glendale and Lakewood. Heir said stores looked like ghost towns during the stirke, with temporary workers attempting to stock shelves alongside store managers.

The strike began on Jan. 12 when previous contracts ended, with over 8,000 workers walking off the job.

A Denver judge issued a temporary restraining order Tuesday that limited picketers to 10 or fewer at each store location after the company filed a complaint claiming strikers threatened and intimidated customers and employees who continued to work.

The grocery store chain proposed a $170 million package during the negotiations that included a raise to $16 per for new hires. Denver’s minimum wage increased to $15.78 on Jan. 1, making the proposed starting wage of $16 per hour barely more than the minimum required by law.

Heir said when the strike began, his store offered the opportunity to work at another location in Boulder since he is a non-union associate and would not be penalized or fined if he crossed the picket lines. Under the proposed new contract, UFCW protected workers will receive is the same contract non-union associates like Heir will receive.

For associates like Justin Hume, a front-end supervisor at the fully non-union Lafayette King Soopers off West Baseline Road and U.S. 287, there is a glimmer of optimism mixed with caution about the settlement.

"Non-union stores essentially get to piggyback off the union stores, so a lot of people were upset that union workers could not vote on the ratification bonuses in one of the company’s proposals," Hume said.

"Hopefully what comes out is not something that in the long run doesn't turn out to be worse. I think there will be good benefits coming out of the contract, but pay benefits, I am not sure and a little leery."

Hume's wariness stems from his 12-year tenure with King Soopers. He’s witnessed other strikes and said sometimes when strikes occur, the contract isn’t as good as people anticipate.Union members will begin voting Monday on the three-year deal. Details of the tentative agreement won’t be publicized until the contract is official.

I hope the company and the union strive for a much more harmonious existence together and continue to work together to create a culture where people feel safe, noticed and appreciated. I think retailers in the United States are finally, for a lack of a better saying, becoming woke to what’s going on."