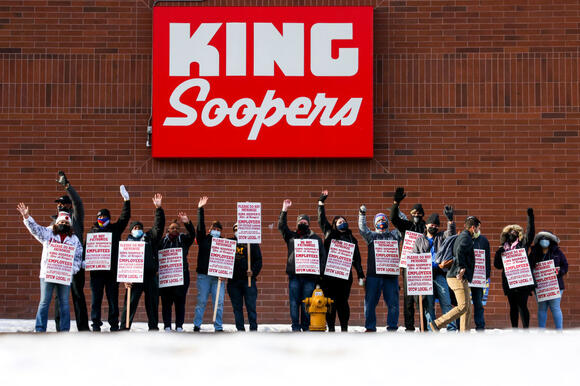 King Soopers grocery store workers wave at a passing car as they go on strike across the Denver metro area on Jan. 12, 2022.(Michael Ciaglo/Getty Images)

(DENVER, Colo.) King Soopers and City Market and the United Food and Commercial Workers Local 7 (UFCW) announced Friday morning that they have reached a three-year settlement, ending the 10-day strike.

UFCW said workers have seven days to go back to work and that those picketing will receive “full credit for Friday and Saturday as though they picketed 8 hours.” Picketing at stores ends immediately.

“After months of negotiations and after our members walked out on strike, we have reached a tentative agreement with King Soopers/City Market that addresses the company’s unfair labor practices and ensures that our members will receive the respect, pay and protection they warrant,” said Kim Cordova, president of UFCW Local 7, in a news release Friday.

“This fight will always be about the workers. I could not be prouder of our members who put it all on the line to have their voices heard.”

The strike started Jan. 12 when previous contracts ended, with over 8,000 workers walking off the job.

A Denver judge issued a temporary restraining order Tuesday that limited picketers to 10 or fewer at each store location after the company filed a complaint claiming strikers threatened and intimidated customers and employees who continued to work.

The grocery store chain proposed a $170 million package during the negotiations that included a raise to $16 per for new hires. Denver’s minimum wage increased to $15.78 on Jan. 1, making the proposed starting wage of $16 per hour barely more than the minimum required by law.

“We are pleased that this agreement allows us to put more money in our associates’ paychecks and secures health care and pension plans,” Joe Kelley, president of King Soopers and City Market, said Friday in a news release. “We look forward to welcoming back our associates and customers.”

Union members will begin voting Monday on the three-year deal, which still needs to be approved by union members. Details of the tentative agreement won’t be publicized until the contract is official.