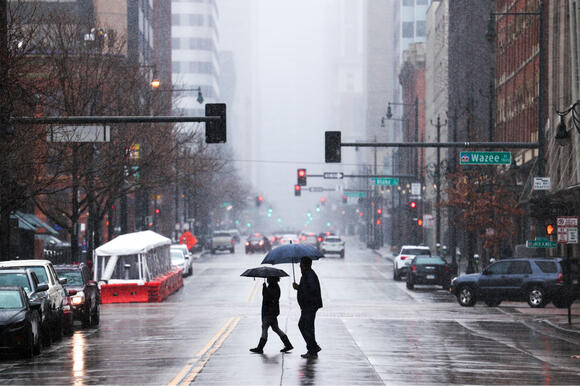 People walk through downtown Denver as it starts to snow on March 13, 2021 in Denver, Colorado.(Michael Ciaglo/Getty Images)

(DENVER, Colo.) The Mile High City is covered by overcast skies Wednesday morning and the roads are icy as a cold front moves across Colorado.

The National Weather Service in Boulder began seeing areas of light freezing drizzle across the Front Range I-25 Corridor and plains around 4:23 a.m. Wednesday. Expect a slick and hazardous commute when traveling through the morning.

The expected freezing drizzle and light snow combined with slick roads and hazardous commute Wednesday morning have led to a Winter Weather Advisory in effect until 8 p.m. Wednesday for the Front Range Foothills, I-25 Corridor and adjacent plains.

Although the air quality in Denver Wednesday is acceptable, pollution may cause a moderate health concern for a small portion of individuals who are unusually sensitive to ozone or particle pollution. The primary pollutant in the air Wednesday is PM2.5 which are small particles that can enter the bloodstream and are often produced by bacteria, smokestacks, small dust particles or wildfires.

NWS Boulder forecasts that the weather in Denver Wednesday will be cloudy, with freezing drizzle and snow mostly before 5 p.m. A steady temperature near 26 for the majority of the day, with a 70% chance of precipitation.

Expect little to no ice accumulation, with a total daytime snow accumulation of no more than a half-inch.

There is a 40 percent chance of snow Wednesday, mostly before 8 p.m. Clouds will cover the skies over Denver Wednesday evening, with east to northeast winds at speeds of 5 to 7 mph expected to become light and variable after midnight.

Snow accumulation throughout the night will add up to less than a half-inch.