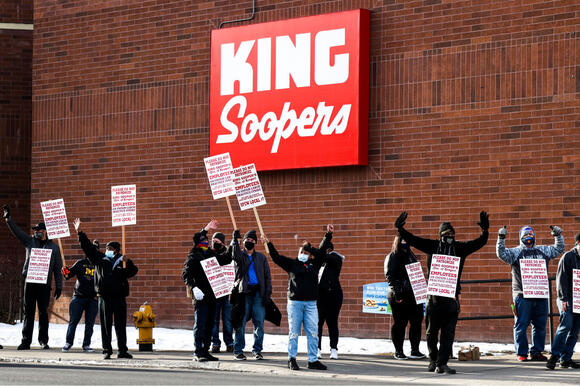 King Soopers grocery store workers wave at passing cars as they strike at more than 70 stores across the Denver metro area.(Michael Ciaglo/Getty Images)

(DENVER, Colo.) Greetings, good morning and happy Tuesday to you and yours, Denver!

Hopefully, the three-day weekend was pleasant for all. Welcome back to another Tuesday edition of the Denver Daily Round-Up.

A lot has happened in the Mile High City since last week, so without further ado, here are some of the top headlines you need to know this Tuesday:

The strike among King Soopers workers continued Monday with the grocery store and the labor union representing employees had planned to negotiate for a fifth consecutive day.

The labor union, United Food and Commercial Workers (UFCW) Local 7, stated that negations would continue Tuesday at 10 a.m. after holding discussions with the company over the weekend. Furthermore, the union claimed that "little to no progress" has been made recently, according to 9News.

The strike began Wednesday at stores across the state in areas including Boulder, Broomfield, Denver and Parker a day after UFCW turned down an offer from the grocery store that is referred to as its "last, best and final offer."

2. Some Adams 14 schools remaining remote due to staffing shortages

Adams County School District 14 announced Monday evening that some of its schools would continue to operate remote learning due to shortages among staff following initial plans to return to in-person learning Tuesday.

Schools that will remain virtual Tuesday are as follows:

3. Told to cease and desist by Colorado AG, testing provider says it's catching up on data reporting

Days after the Colorado Attorney General's Office sent the president of a COVID-19 testing company a cease and desist letter, he is claiming that his team is working to catch up with requirements regarding data reporting.

The Denver Gazette reports that the COVID-19 testing company based in Georgia, Macagain, provided testing at eight locations in the Denver metro area, Boulder and Fort Collins. The cease and desist letter was sent Friday, with Assistant Attorney General Jennifer Weaver writing that President Khalid Ansari's company did not report results of its tests and needed to halt all testing immediately or face action.

A physician group told Gov. Jared Polis' staff late last week that emergency rooms in the Centennial State are on the brink of rationing health care without legal protection that would be in place if Colorado authorized crisis standards during the surge of the omicron variant.

The Colorado chapter of the American College of Emergency Physicians sent Gov. Polis' office a five-page letter that stated that doctors are being forced to determine which patients receive limited hospital beds, with some people who are considered not sick enough being sent home, according to The Denver Post.

Dr. Ramnik Dhaliwal, president of the Colorado chapter, stated that staffing shortages in hospitals in addition to confusion among the public regarding where to get care for COVID-19 testing have led to a shortage in emergency departments that is impacting all patients, not just those being treated for coronavirus.