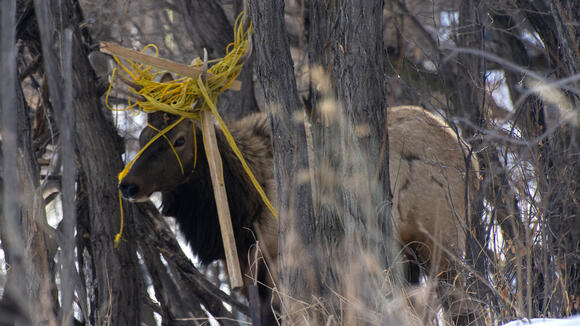 This bull elk got roping entangled in its antlers and later became stuck to several trees on Tuesday morning.(Photo by Jason Clay/Colorado Parks and Wildlife)

(GOLDEN, Colo.) A bull elk entangled in rope near Golden High School was saved by Colorado Parks and Wildlife officers Tuesday after it became hung up and stuck on several trees.

A resident called and reported the bull elk Tuesday around 8:15 a.m. after witnessing it in a thicket near 24th Street and Cheyenne Drive caught up in rope in its antlers, with a trail of rope behind it. Wildlife officers showed up at the scene at 9 a.m. Tuesday and received help from the Golden Police Department's Animal Management unit, according to CPW.

The bull elk was tranquilized by a CPW wildlife officer so that it could be freed, with the roping removed by 10:25 a.m. The bulk elk wasn’t injured, but was exhausted.

A reversal agent woke the bull elk up from its sedation afterward and it ran off. Officers expect it to make a full recovery.

“Land managers rope off areas to try to prevent elk from damaging them,” said Area Wildlife Manager Matt Martinez. “It is an aspect of the landscape and shows the intersection of humans and wildlife in our urban interface. Land managers have every right to protect their property and the ones in Golden do as good of a job as they can to mitigate conflicts like these."

This has been a busy week for CPW wildlife officers. Monday, officers saved a moose after it got stuck in the basement of a Breckenridge home.

CPW also is in the middle of a five-year study to better comprehend movement and land use of elk in the Golden area. Wildlife managers will use study data to develop strategies for herd management and habitat use.

See the video of the study below:

“Thanks to the local resident who reported this immediately, we were able to have a quick response and freed the elk without it sustaining any serious injury," Martinez said.