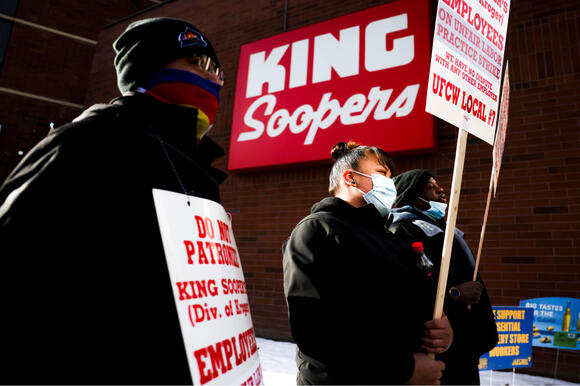 King Soopers grocery store workers walk the picket line as they strike at more than 70 stores across the Denver metro area on Jan. 12, 2022.(Michael Ciaglo/Getty Images)

Hopefully it has been a smooth workweek thus far for all. Welcome back to yet another Wednesday edition of the Denver Daily Round-Up.

The grocery store has arranged to keep its stores in the metro Denver area open regardless of the strike, with both sides claiming unfair labor practices, Sara B. Hansen reports.

On Tuesday, King Soopers filed a complaint with the National Labor Relations Board, accusing the union of unfair labor practices, just as the union did when it filed a federal lawsuit against the grocer in late December, the Denver Post reports.

The weather in the Mile High City Wednesday will be warm and clear for the most part, with mostly sunny conditions expected around 2 p.m.

The skies over Denver are partly cloudy Wednesday morning, with the sun having risen at 7:20 a.m. Sunset is expected to take place Wednesday at 4:56 p.m.

The National Weather Service in Boulder forecasts mild temperatures today, with a high temperature in Denver around 57. The skies over the Mile High City Wednesday evening will be clear for the most part, with a low-temperature dipping near 28.

3. Path for Broncos to be sold cleared with judge's ruling

Denver Judge Shelley Gillman of Denver's Second District Court ruled Tuesday that "the right of first refusal is no longer valid or enforceable in any respect,", clearing a path for the sale of the Denver Broncos.

Edgar Kaiser purchased the team in 1981 and sold it to late owner Pat Bowlen in 1984, with a clause in the original deal that gave Kaiser the right to match outside offers for the Broncos if Bowlen ever sold. The Broncos may now have a new owner as early as this summer, with six candidates currently set to bid, including former quarterbacks Peyton Manning and John Elway, according to The Denver Gazette.

Non-profit Community Foundation Boulder County declared Tuesday that a total of $3.8 million of the initial $5 million in administered assistance has been directly distributed to roughly 1,400 families and individuals affected by the Marshall Fire.

An advisory committee for the Boulder County Wildfire Fund was established to help the Community Foundation Boulder County board with how future support will be provided, with the board additionally approving a $150,000 grant to United Policyholders to support those who need help with insurance policies.