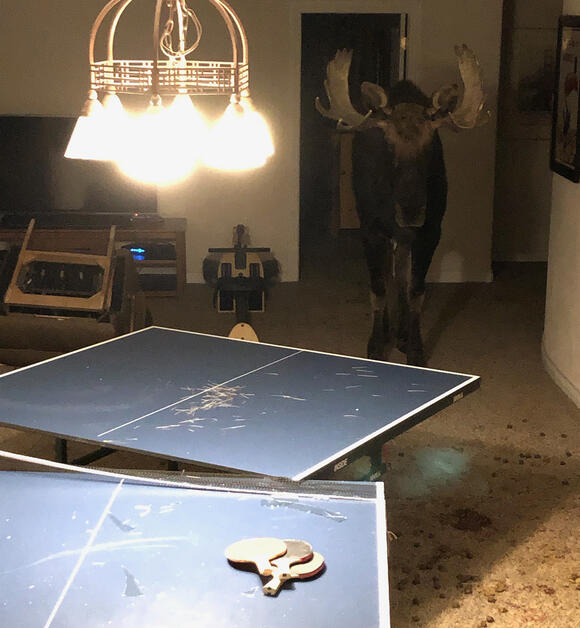 CPW officers rescued a moose that had become trapped in the basement of a house in Breckenridge on Monday.(Photo courtesy of Colorado Parks and Wildlife)

(BRECKENRIDGE, Colo.) Colorado Parks and Wildlife officers saved a moose on Monday after it entered a home in Breckenridge and was trapped in the basement.

A call was made to CPW officers Monday at 3:30 p.m. reporting a trapped moose in the basement of a house located off Ski Hill Road in Breckenridge, according to CPW. After responding to the scene, wildlife officers discovered that the moose had fallen through a snow-covered window well into the basement of the home while grazing nearby.

The responding officers opened the doors of the home so that the moose could exit, however, the moose did not leave at that point as it had to get up the basement stairs to get to the exits. CPW wildlife officers were assisted by Blue River Police, Breckenridge Police and the Red, White & Blue Fire and EMS with carrying the moose up the stairs and outside where it was released safely back into the wild.

“It was a great team effort, and other than a small cut on its leg, the moose appeared to be healthy,” said CPW District Wildlife Manager Jake Kay.

The moose was tranquilized by CPW officers who additionally cut off its antlers so that it could fit through the stairway of the home and prevent further damage inside the house. The moose will soon grow new antlers this spring as moose antlers often fall off during this time of year.

This non-violent incident adds to a multitude of conflicts involving moose in Colorado, including a Boulder woman in Winter Park being attacked by an aggressive cow moose on Aug. 29, 2021, a 62-year-old man from New Mexico being attacked by a bull moose on Aug. 24, 2021, in Winter Park while running alongside his two dogs and a 79-year-old woman being hospitalized on Aug. 13, 2021, south of Glenwood Springs after a cow moose attacked her.

“It’s important that window wells allow people in a home to escape in the event of an emergency, but at times they can be hazards to wildlife,” said CPW Area Wildlife Manager Jeromy Huntington. “Removing vegetation that may attract wildlife around the vicinity of window wells and covering below ground window wells with approved grates that allow people to escape will reduce the likelihood of wildlife becoming trapped, or in this case, having an unwelcome visitor in the home.”

For more information regarding living with moose in the Centennial State and avoiding conflicts with wildlife, click here and here.