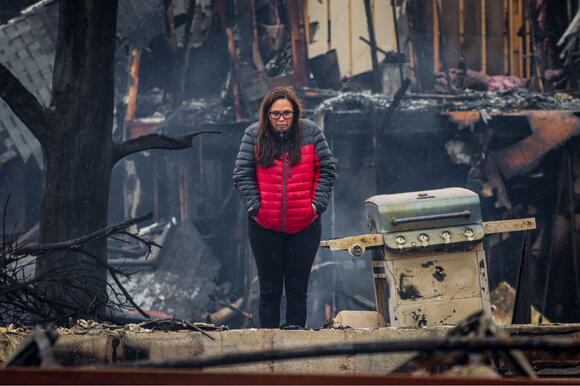 Laurie Silver of Lafayette, Colorado takes in what remains of her cousin's condo in the aftermath of the Marshall Fire on December 31, 2021.(Marc Piscotty/Getty Images)

The weekend is just hours away. Welcome back to another Friday edition of the Denver Daily Round-Up.

Denver will warm-up Friday before another chance of snow this weekend.

NWS predicts mountain snow will begin Friday evening and is advising anyone heading to the backcountry Friday to exercise extreme caution due to dangerous avalanche conditions in the Front Range Mountains.

Other officials including First Lady Jill Biden will tour an area of Louisville that the fire damaged. The president will additionally meet with survivors at the Louisville Recreation & Senior Center and provide remarks regarding the federal response to the fire, according to 9News.

The current surge of omicron in Colorado is beginning to affect RTD services as a worker shortage is making the agency implement a multitude of changes to its routes.

CBS Denver reports that a total of 77 new COVID cases have been reported in just three weeks across all of RTD's operations. In an attempt to get more bus drivers, rail operators, mechanics and technicians, there are new incentives in the air, including a $4,000 hiring bonus to bring in new employees and keep operations running.

4. You can get a puffing citation if you remote start your vehicle, leave it idling more than 5 minutes

As temperatures and snow drop in the Centennial State, leaving a car running to heat up is illegal.

"Puffing", leaving a car attended while running can make car theft very possible, and the Denver Police Department stated that cars with a remote start are exempt from the law. Drivers can be cited if their cars idle for over 5 minutes on public or private property. Colorado law states that individuals caught in the act of puffing could be fined $60, according to FOX31 Denver.