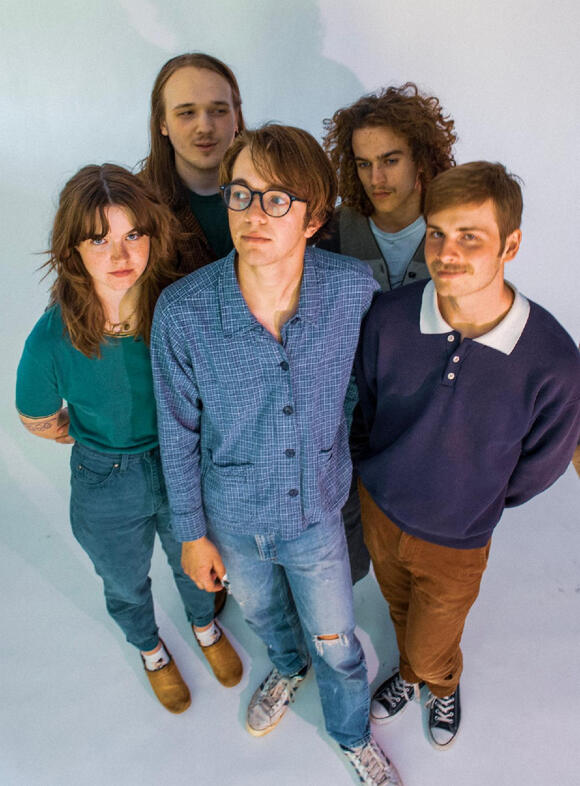 For indie-rock quintet Future Crib, growing up in Nashville was a great opportunity to dig into a wide variety of styles of music.

"It's the capital of country music, but there's a lot of punk, hip-hop and rock," said frontman Johnny Hopson. "We had a lot of fun going to those when we were younger and got inspired to do our own thing. It's kind of a community camaraderie but a healthy inspiring of everyone and uplifting each other."

All of the band members played music as children and came from families who enjoyed making music but did not make it their full-time career, allowing each of them to absorb that passion for music at such young ages. Hopson attended Brentwood High School with bassist and vocalist Julia Anderson and multi-instrumentalist and keyboardist Bryce DuBray while drummer and vocalist Noah Pope grew up homeschooled in Franklin, TN., just south of Nashville.

Guitarist and vocalist George Rezek later joined Future Crib full-time after filling in on drums for Pope during a 2019 tour.

Hopson and his other bandmates believe that knowing each other very well and being friends initially helped with the band's dynamic. They all felt super motivated in what they do always and held self-confidence in themselves while making sure to keep a tick on their egos.

We had a conversation along the lines the other day that there wasn't really ever a time that I deep down thought or didn't think I was going to do this," said Hopson. "For a long time, I thought i'm not going to tell people I want to do this and it's not a real job, but it is." 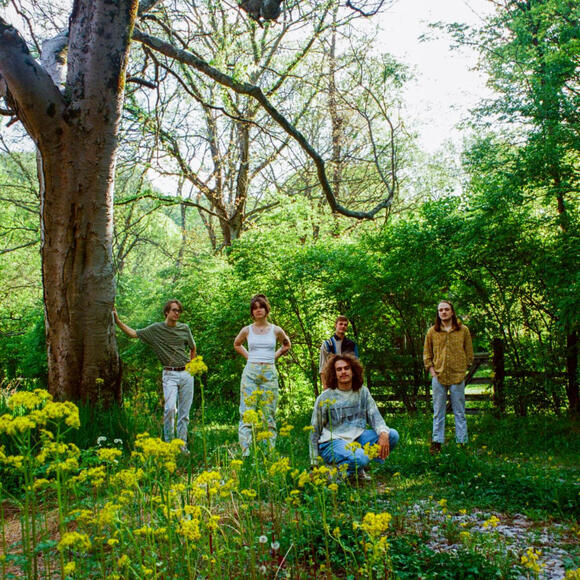 The band recently released their fourth studio album, Full Time Smile, on Sept. 10. The album, recorded in Roswell, GA. in December of 2020, features songs that were all written before the COVID-19 pandemic. The band had planned to record the songs earlier, but once the pandemic hit the United States in early 2020, that was put on hold.

For Pope, his inspiration for writing songs comes from doing things throughout his days, so when the initial COVID lockdowns forced everyday hustle and bustle to stop at once, he started focusing on not creating more than attempting to create something. Nevertheless, once things began opening back up and concerts started up again, it was like flipping a switch for him, and the ideas started pouring in.

Living in Nashville, Future Crib took all of their recording equipment to Roswell where Hopson's girlfriend's family lives and made it their home studio where they worked day and night, recording a total of eleven songs in just five days. The album features upbeat, pop-like, catchy and euphoric melodies like those on the album opener "Miserable" that seek to embed the essence of happiness and self-acceptance.

"I think the whole album is about transitions through life," said Anderson. "Throughout the three years of pulling the songs together, we all changed so much, as did the songs. The whole album to me symbolizes change, acceptance and transitions. For me, it's a promise to yourself to be as happy as you can."

Here's the music video for “BG”, the tenth track on Full Time Smile featuring singer-songwriter Briston Maroney that was initially released on July 27, 2021 as a single.

The same day Full Time Smile was released, Future Crib embarked on a U.S. tour from Sept. 10 through Oct. 16 stopping in cities such as Denver, Los Angeles, Oklahoma City and Reno. The tour began and ended in their hometown of Nashville and was centered around TreeFort Music Fest, a five-day indie rock festival held in Boise Idaho that the band had dreamt about playing since they were young.

"It was really humbling to be a part of a festival that has a community that just feels so organic and is so welcoming of bands from all over the place," said Dubray. "This was the 9th festival and we saw the line-ups as young teenagers. It was like oh man what if we got to do this one day".

The group also had the pleasure of meeting a hero of theirs at the festival, Doug Martsch of Built to Spill, a hometown hero band of Boise.

Looking ahead, DuBray would like to get to a point where the band can have more control over their performances and environments to be able to deliver the best possible experience and performance for their fans while Rezek is living in the moment and not trying to hold any expectations. Other band members such as Anderson simply hope to be able to support themselves and make music full time with her best friends.

Thinking about ten years from now, my biggest hope is that I am in a place where i'm comfortable and stable enough to make music full time and make a comfortable living doing that with our besties.

For more information regarding Future Crib, such as where to buy merchandise and how to see them live at their next performance, click here.

(Pieter van de Sande/Unsplash) (DENVER, Colo.) Good morning and happy Tuesday Denverites. Welcome back to another Tuesday edition of the Denver Daily Round-Up. The sun is standing tall and bright over Denver today, with partly cloudy conditions expected around 11:00 a.m. The forecast high for Tuesday is 60°F with the forecast low being 30°F.

Courtland Sutton #14 of the Denver Broncos celebrates after catching the ball for a touchdown during the fourth quarter.(Tom Pennington/Getty Images) (DENVER, Colo.) Hello, top of the morning and work week and welcome back to another Monday edition of the Denver Daily Round-Up.