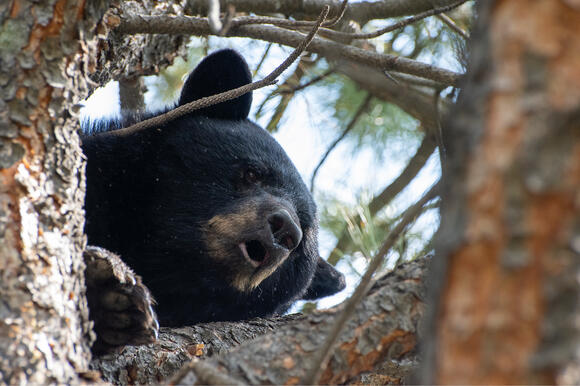 A bear up a tree near C470 and South Platte Canyon Road on Sept. 29.(Photo courtesy of Jason Clay/Colorado Parks and Wildlife)

(DENVER, Colo.) The Denver metro area is witnessing a spike in bear activity over the past month and a half.

Colorado Parks and Wildlife (CPW) is looking to educate residents on bear activity as this activity is not unusual or new to the highly populated Front Range, according to CPW. CPW wildlife officers relocated a bear on Oct. 8 from the 2400 block of South Jackson Street in Denver.

Wildlife officer Jerrie McKee explains in a question and answer session with CPW that this is not the first time a bear has had to be relocated from the Mile High City. More recently, a bear was caught on camera at a home Thursday around 4:40 a.m. near Cole Way and Tufts Ave., according to Fox31 Denver.

“Bears can show up in unusual locations, and generate lots of calls to our offices, at any time of year but especially in the fall as untapped food sources become more appealing,” said CPW Northeast Region Manager Mark Leslie in a press release. “We evaluate every call based on the location and behavior of a bear and will relocate or remove bears when appropriate and feasible."

Sighting reports are additionally increasing following a period of relatively low reports compared to an average year from spring through August. This is to be expected since bears are now in hyperphagia, the period in the fall when they prepare for hibernation by searching for more than 20,000 calories each day.

The map below displays bear activity in the Denver metro area from Sept. 1 to now.

It can also be expected of bears to explore new food sources such as those found in Denver as bear populations rise past what the landscape can support. Urban areas like Denver lack natural population checks and can prove difficult to manage bears in as they can end up colliding with vehicles or causing conflicts.

“When we move one, there are very few places on the Front Range of Colorado that will not put them in contact with humans or the potential for conflict," said Leslie.