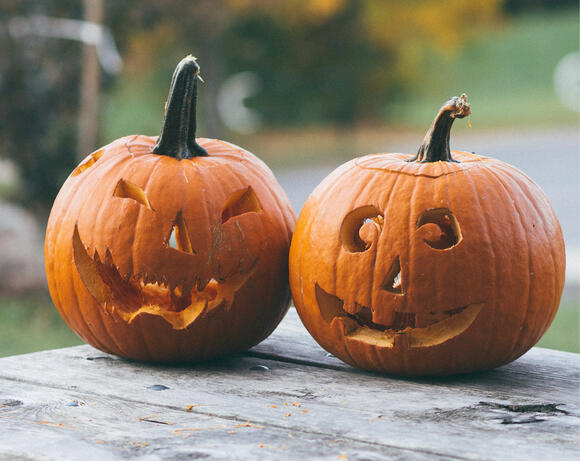 With October midway through and Halloween nearing, pumpkins across the country will be carved and made into front-door decorations.

Alternatively, pumpkins can also be utilized to produce an abundance of fresh and savory spreads. Whether you roast the seeds or make a puree, here are five recipes that can be made using pumpkins:

Take a spooky trip to Italy with this quick and easy pumpkin ravioli recipe.

In just one hour with 30 minutes of prep time and 30 minutes of cook time, this recipe serves two people and requires peeling and cutting the pumpkin. It also calls for two coarsely chopped sage leaves, 245 grams of plain flour, two teaspoons of olive oil and a few other ingredients.

Begin by preheating the oven to 400 degrees Fahrenheit and line an oven tray with baking paper. Next, combine the peeled and cut-up pumpkin, chopped sage, garlic and oil in a large bowl and season and toss. Arrange on the oven tray in a single layer and roast for 20 minutes.

Once tender, transfer the contents of the tray to a large bowl, mash with a fork and allow to cool. Whisk one egg in a large jug with water.

After creating the pasta sheet, add goat's cheese and pepper to pumpkin and mash to combine. Next, cut out sixteen circles in the pasta sheet and spoon pumpkin mixture in the center of eight of the pasta circles. Brush egg over the remaining eight circles and place brushed-side down over filling to make eight raviolis, pressing the edges together to enclose filling.

Push out any air bubbles and firmly press a small fork around the edges to seal each ravioli. Boil salted water over high heat in a large saucepan and add the ravioli to simmer at reduced heat for eight to nine minutes. Melt butter in a large frying pan and add whole sage leaves to crisp for three to four minutes. Drizzle ravioli with burnt butter sauce and garnish with sage leaves.

Forget peanut butter, this overnight pumpkin butter recipe is the condiment to try.

Utilizing whole pumpkin as opposed to canned pumpkin puree, this recipe can be a fun way to get the experience of pumpkin carving without the scary designs. It is recommended to use small pumpkins for this scary spread. 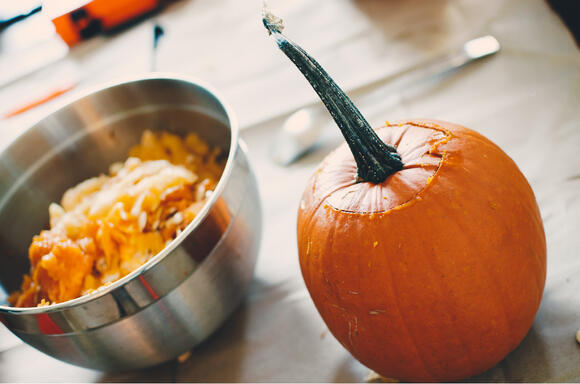 Ingredients needed include two small pumpkins as mentioned above, two tablespoons of butter, 1/4 cup of apple juice and a couple of other items. Start by cutting open both pumpkins and scooping out the guts. Remove the outer rind of the pumpkins and cut them into small cubes.

Combine the fresh pumpkin cubes, sugar, apple juice, vanilla extract and spices into a crockpot and stir together. Set to cook on low for eight hours or overnight so that you can wake up to the smell of pumpkin the next morning.

The pieces of pumpkin should be soft once the mixture is finished cooking. Utilizing an immersion blender or a food processor, puree the mixture. Serve on toasts or other foods and enjoy!

If pumpkin soup is not your forte, these caramelized coconut pumpkin fries are sure to turn a pumpkin into a scrumptious snack.

Served best in paper, this pumpkin-flavored take on one of the country's most popular food. The recipe produces four small servings and calls for only three ingredients including half a large pumpkin, dark muscovado sugar and desiccated coconut.

Ground a handful of sugar and coconut together in a pestle and mortar and rub the mixture generously on the pieces of pumpkin. Place the pieces on a baking tray and cook in the oven for 40 minutes or until they are golden and crispy.

Drizzle with olive oil if needed and enjoy.

Give your tastebuds the pleasure of Thailand and fall with slow-cooked Thai red pork curry featuring a full-flavored pumpkin sauce.

The recipe produces four servings and requires fifteen minutes for prep time and two hours and thirty minutes for cooking time, yet it is quite worth the wait. Serve with rice, naan bread or stir-fried vegetables.

The ingredients you will want to have for this recipe include three tablespoons of peanut oil, 500 grams of peeled pumpkin cut into 3 centimeter portions, three tablespoons of Thai red curry paste and a multitude of other various items. The first of seven steps calls for preheating the oven to 350 degrees Fahrenheit and heating oil in a large flame-proof casserole dish over medium-high heat.

Next, sweat the onion and pepper until it begins to color and stir in curry paste to cook for several minutes or until fragrant and thoroughly combined. Add the pork and mix well to coat it with the sauce and then cook over high heat for a few minutes while constantly stirring.

Stir in the strained tamarind liquor and add the coconut cream and beer, stirring to combine. Bring to a boil and then add the lime leaves, pumpkin and potato. Stir all the vegetables through and let the mixture come to a boil once more.

Turn off the heat, cover the dish with a lid and transfer it to the oven to bake for one and a half hours stirring the curry once or twice. Add the squash and courgette and bake again for an additional 45 minutes depending on how well done you want the vegetables.

Stir some of the coriander through and serve the curry in bowls on a bed of rice. Garnish with the leftover coriander and chili slices if wanted.

While pumpkin puree can be used in this recipe rather than pumpkin guts, the chunky and solid guts can provide the opportunity to have ribbons of pumpkin throughout the bread as opposed to having it absorbed into the batter. It is important to note that the bread will fall apart if the pumpkin guts are too big and not chopped up enough.

To make this recipe you will need three cups of sugar or sugar substitute, two tablespoons of cinnamon, two cups of fresh pumpkin guts (string separated from the seeds) and a list of additional ingredients. Chopped pecans are optional.

To get started, preheat the oven to 350 degrees Fahrenheit and grease two 9x5 loaf pans well and dust with flour. Next, using your fingers and a pair of scissors, separate the pumpkin guts and ensure that they will be able to mix into the batter.

Add flour, sugar, cinnamon, nutmeg, soda, salt, eggs, oil, water and pumpkin into a large mixing bowl and stir until the mixture is a smooth batter. If pecans are involved, mix them into the batter or sprinkle on top once the batter is poured into the loaf pans.

Pour the batter into the pans and bake for one hour. Check for doneness by putting a wooden skewer into the center of the loaf. If clean, the loaves are finished. If not, bake longer and check every five minutes.

Cool slightly in the pans for roughly ten minutes and then take them out of the pans to cool on a rack.