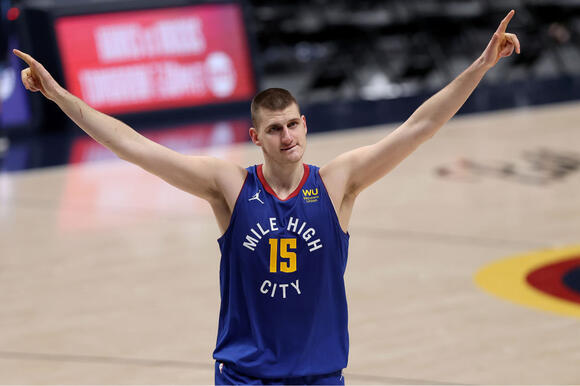 Nikola Jokic #15 of the Denver Nuggets leaves the court after their double overtime win over the Portland Trail Blazers.(Matthew Stockman/Getty Images)

(DENVER, Colo.) Good morning and top of the workweek Denver.

Welcome to the Monday edition of the Denver Daily Round-Up.

The following four stories are some of Denver's most important happenings you should know about for this Monday:

The Denver Nuggets are in Los Angeles Monday to face the Los Angeles Clippers, kicking off the 2021-22 preseason.

Denver will have five warmup contests over the next two weeks to help them prepare for the regular-season opener on Oct. 20th. Younger players such as Bones Hyland should see opportunities in Monday's game, as several players are likely unavailable.

Monday will be the first unofficial NBA game for Hyland, a 21-year-old rookie who has received praise during training camp due to his steady play and effectiveness for pushing the pace.

Denver International Airport is building two new solar farms on the property as part of its commitment to sustainability.

The output will be comparable to almost 6,000 homes in the Mile High City once construction is completed. The construction is currently underway for the first two solar arrays, with operation expected to start sometime in the first quarter of next year.

The airport expects to save nearly $3 million over 25 years.

3. When will snow arrive in Denver?

Snowfall could arrive within two weeks as October is here and it is typically the month that the Mile High City sees its first snowfall of the season.

While it is very common to see snow in October in Denver, it has been a long time since the city saw a large snowstorm in October.

Avalanche center Nathan MacKinnon sold his penthouse unit located on the 19th floor of the condominium building at 1750 Wewatta St. for $3.1 million in early September, according to public records.

MacKinnon sold the property for $100,000 less than what he paid for it in 2019 when the building situated next to Union Station was finished. MacKinnon listed the unit for sale in May of this year, asking for $3.5 million.