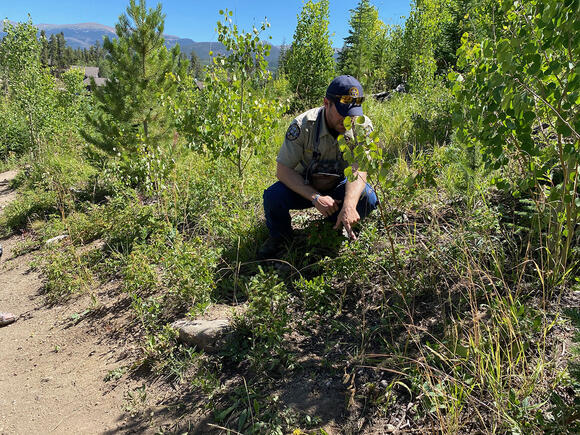 (WINTER PARK, Colo.) A 62-year-old man from New Mexico was attacked by a bull moose Wednesday morning in Winter Park while running alongside his two dogs.

The attack took place on Sundog Trail around 7:30 a.m. on the west side of Winter Park with the man's two dogs being off of their leashes when the bull moose attacked, according to Colorado Parks and Wildlife. The man was taken to the emergency room of a nearby hospital suffering minor injuries and was later released Wednesday.

Both of the dogs were unharmed in the attack.

“The dogs were 40 to 50 feet in front of him and came running back toward him,” said CPW District Wildlife Manager Serena Rocksund. “He stopped and saw the moose at 50 feet. At that point, the dogs ran past him and left the scene.”

Rocksund also stated that the man claimed that he took two steps forward to get a better look a the moose which had caused the moose to charge him. The only injury the man had from the attack was a hoof print-shaped cut on the back of his head.

The moose has yet to be found in the area.

This attack adds to the increasing number of moose-human conflicts. Most recently, a 79-year-old woman was hospitalized with severe injuries on August 13 around 9:00 p.m. south of Glenwood Springs after a cow moose attacked her.

Another man was attacked by a bull moose in Clear Creek County on August 7, however, the man walked away uninjured. Another man was knocked over on his back and stomped by a cow moose with two calves on May 29 in Steamboat Springs and on March 26, 2006, a Grand Lake man was attacked by a moose bull and suffered critical injuries which later caused him to die on April 6.

“This is a good reminder for folks to keep their dogs on leash and give moose plenty of space when recreating outdoors,” Rocksund said. “It’s hard to see around these corners with the thick vegetation on these trails, so having a dog on a short leash here is key.”

For more information regarding living with moose, click here.