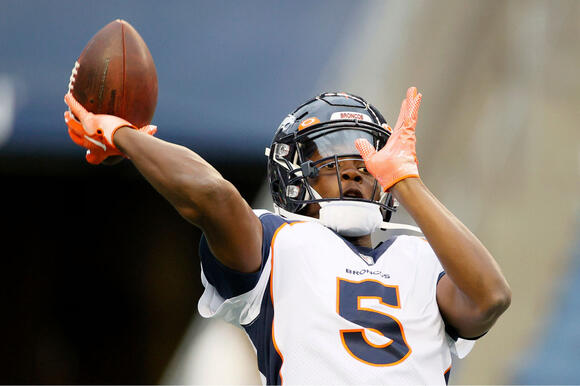 (DENVER, Colo.) After much anticipation, the Denver Broncos have announced on Wednesday that Teddy Bridgewater will be their starting quarterback for the regular season.

Head coach Vic Fangio informed the team Wednesday morning that he had named Bridgewater, who was acquired by the Broncos for a sixth-round pick from the Carolina Panthers this year, as starting quarterback over Drew Lock, a 2019 second-round pick, according to the Denver Broncos.

Nevertheless, Bridgewater completed a total of 16-of-19 passes for 179 yards, two touchdowns and a 141.0 quarterback rating for his preseason campaign. Additionally, he led the Broncos offense to a total of three touchdowns and one field goal.

On Saturday, the Broncos faced the Seattle Seahawks in Seattle, where Bridgewater completed a total of 9-of-11 passes for 105 yards, one touchdown and a 136.7 rating in two series.

"Teddy played well, obviously," said Fangio on Saturday. "He was helped by the fourth-down conversions, but one of those fourth downs was because we dropped a pass on third down that would have been an easy conversion. So I thought he played very well."

The announcement that Bridgewater will be starting quarterback is somewhat of a second chance and blessing for Bridgewater as severe injuries have caused him to remain off the field. In 2016, he suffered from a knee injury that possibly could have ended his career, keeping him off the field for the entire 2016 season and the majority of the 2017 season.

Bridgewater will lead the Broncos into battle against the New York Giants on Sept. 12 at 2:25 p.m. at MetLife Stadium in East Rutherford, New Jersey, where he will attempt to get the team on track to its first playoff berth in six years.

(Emmanuel Appiah/Unsplash) (DENVER, Colo.) Friday's weather forecast predicts sunny skies and warm temperatures in the Mile High City. The National Weather Service in Boulder predicts the high temperature to reach near 77 Friday. Expect breezy conditions with south to southwest winds at 8 to 16 mph to become west to northwest in the afternoon.

Broncos, Texans set to face off at Empower Field this September for home opener

(DENVER, Colo.) The Mile High City's annual Mulch Giveaway returns from 8 a.m. to 2 p.m. Saturday to offer Denverites a chance to save on landscaping. The event allows Denver residents to pick up free mulch and works to help keep recycled materials used. The mulch consists of ground up Christmas trees gathered through the Treecycle program, according to the city.

(Randy Laybourne/Unsplash) (DENVER, Colo.) Greetings, good morning and welcome back to another Thursday edition of the Denver Daily Roundup. Today is Thursday, May 12. Much has happened in the Mile High City in the past 24 hours.

(DENVER, Colo.) Thursday's weather forecast calls for more sunny, warm and windy conditions in the Mile High City. The National Weather Service in Boulder predicts sunny skies will cover Denver for most of the day. The high will climb to temperatures near 73.

Applications open for Denver arts program, funds up to $3K

(DENVER, Colo.) Denver Arts & Venues is accepting applications now through May 27 for its EDI Mini-Grant Program to aid people, organizations or community-driven projects. The program works to alter the conventional charitable process by giving communities decision-making power regarding funding decisions, according to the program's website.

(Brandi Alexandra/Unsplash) (DENVER, Colo.) Hello and welcome back to another Wednesday edition of the Denver Daily Roundup. Today is Wednesday, May 11. More critical fire danger looms in the Mile High City this hump day, with the high temperature expected to reach near 89. A red flag warning is in effect from 9 a.m. to 9 p.m. Wednesday due to dry conditions, low humidities and gusty winds.

(Flex Point Security/Unsplash) (DENVER, Colo.) The Fillmore Auditorium and Summit are hiring individuals to work part-time as security guards to ensure safety at events. Utilize metal detectors or conduct pat-down searches of guests to prevent weapons from entering the venue.

Nikola Jokic #15 of the Denver Nuggets leaves the court after their double overtime win over the Portland Trail Blazers.(Matthew Stockman/Getty Images) (DENVER, Colo.) Greetings, good morning and welcome back to another Tuesday edition of the Denver Daily Roundup.

(DENVER, Colo.) Tuesday in the Mile High City is shaping up to be a warm and clear day. The National Weather Service in Boulder predicts sunny skies over Denver Tuesday, with a high temperature near 75. Expect eastern winds at 6 to 11 mph to become northern in the afternoon.

(Acton Crawford/Unsplash) (DENVER, Colo.) The city and county of Denver will release a new episode of Elevating Denver at 7 p.m. on Tuesday discussing a variety of topics affecting the Mile High City.

Nikola Jokic #15 of the Denver Nuggets walks off the court after defeating the Memphis Grizzlies at Ball Arena on April 7, in Denver, Colo.(Ethan Mito/Clarkson Creative/Getty Images)

(DENVER, Colo.) The Denver Broncos and Esports Gaming League are hosting a Rocket League Tournament at noon Saturday. The cross-platform tournament is free to play and involves teams of three vs. three. Registration is currently open and closes Saturday at 11:30 a.m., 10 minutes before the tournament begins.

(DENVER, Colo.) Hello and welcome back to another Monday edition of the Denver daily Roundup, bringing you top and local stories from in and around the Denver metro. Today is Monday, May 9. Hopefully, everyone's week has started well.