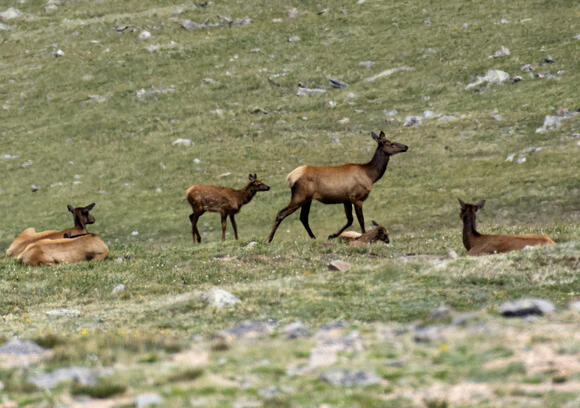 (DENVER, Colo.) Colorado Parks and Wildlife (CPW) officials have issued their yearly warning as a result of two recent attacks. The warning is simple: avoid deer, elk, and moose that have newborn calves and fawns.

An elderly man was knocked down and stomped by a cow moose with two calves on May 29 near Snowflake Circle and Meadow Lane in Steamboat Springs. The victim became aware of the moose when he heard his unleashed dog barking outside.

After attempting to grab the dog, the moose charged at the victim. He was examined on-site for minor injuries.

“Cows will be exhibiting normal protective behavior of their young. Give wildlife extra space this time of year," said Wildlife Officer Tim Woodward. "Dogs can trigger aggressive behavior and both moose and elk will chase a dog right back to their owner, presenting a dangerous situation.”

On Thursday, a 90-year-old man injured his hip in Evergreen after a cow elk charged at him and other people. The elk did not make contact with the man, however, he was sent to the hospital for his injury to be evaluated.

Over the course of the last week, additional reports of aggressive behavior in moose in Steamboat Springs and elk in Evergreen and Estes Park have come through. Recently, a man suffered serious injuries from a bear attack on Sunday at 11 p.m. near his home in Steamboat Springs after a sow was attempting to protect her two cubs.

All of these occurrences are examples of wildlife being unpredictable and that they should be respected along with their space. As many mammals and birds are giving birth this summer, CPW is reminding people to observe wildlife from a distance and never attempt to interact with them.

“As people are recreating for the next three or four weeks, they should be keeping their dogs on a leash or leaving them at home,” said Kristin Cannon, Deputy Regional Manager for CPW’s Northeast region. “They should be aware of their surroundings and should give all wildlife plenty of space.”

A great way to avoid run-ins with moose is to avoid thick willow habitat in riparian areas where they often eat or rest. Moose calves that are born this month can be found lying in the willows, weighing anywhere from 26 to 28 pounds when born and can reach weights ranging from 385 to 400 pounds by the fall.

Elk calves are often born in areas with cover, forage and water in late May or early June, weighing around 28 to 35 pounds. They are typically born one at a time, being covered in white spots for the first few months of their lives.

For more information regarding tips for watching moose, click here or to learn more about spring wildlife advice, click here.