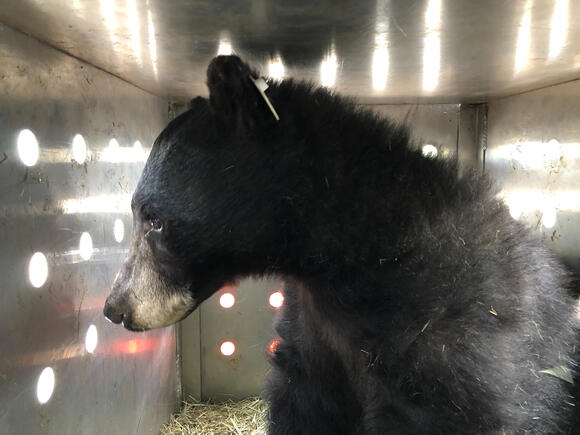 The young black bear moments before its release back into the mountains on May 5, 2021.(Photo courtesy of Jason Clay/Colorado Parks and Wildlife)

(DENVER, Colo.) A yearling black bear was released back into the Rocky Mountains on May 5 after being injured during last year's Cameron Peak Fire.

The young bear was treated and rehabilitated for a total of five months by Colorado Parks and Wildlife (CPW) prior to its release. The opportunity to treat the bear came from a collaboration between landowners, wildlife officers and state wildlife health and wildlife rehabilitation officials.

“This bear's drive to survive did most of the work and we just gave it a little boost,” said Kristin Cannon, deputy regional manager for Colorado Parks and Wildlife’s Northeast region. “This bear went through an awful lot in its first year of life, let's hope humans can now help keep it wild by not rewarding it with our food sources and lowering its chances of survival.”

The largest wildlife in the state's history, the Cameron Peak Fire, ravaged approximatley 208,913 acres within Larimer County from Aug. 13 to Dec. 2. The edge of the fire ran all the way down to Buckhorn Road near Green Ridge, where the bear was initially spotted.

CPW received a call regarding the injured bear on Dec. 7 from landowners on Buckhorn Road near Masonville who had witnessed the cub on their parent's porch. The bear was later located four days later sleeping on the same porch and was eventually captured by a wildlife officer.

The cub was found with burns on its feet, infected ears from frostbite and was dehydrated and starved, weighing a total of 16.3 pounds. The bear was transported to CPW's health laboratory located in Fort Collins where veterinarians Dr. Pauline Nol, Dr. Karen Fox and CPW area wildlife manager Jason Duetsch inspected it.

Since the foot injuries on this cub appeared to be healing well, and his other wounds were very treatable, we felt that with supportive care and nourishment his prognosis for recovery was very good,” said Dr. Nol.

The cub was examined and sedated, having its feet cleaned and bandaged, its ears treated and received fluids, pain medication and antibiotics. Wildlife officials state that they are not able to figure out how long the cub was orphaned or when it received the burns, but they assume the burns came a while back as the cub's feet show new tissue growth.

The bear cub was kept awake through the winter by Michael Sirochman, manager of CPW’s Frisco Creek rehab facility in southwest Colorado in order to allow it to eat and get back to a normal body weight by spring. The cub additionally received a specialized diet that began with easily digestible foods until his digestive system got back on track.

“I’m normally pretty optimistic when it comes to starvation with bears because they are a little different,” said Sirochman. “The nature of bears losing so much weight every year in winter torpor, they seem to be able to come back from that more easily than some other species. When the cub arrived at our facility it was feisty in the trap, and that bodes well to have that spunk still in it.”

The bear's weight reached 93 pounds at the time it was ready to be released back into the wild.

“(It’s release location) has the benefit of being in likely the same drainage where this bear came from originally and still has some suitable habitat post-fire,” said Clayton Brossart, the wildlife officer who released the bear on May 5.