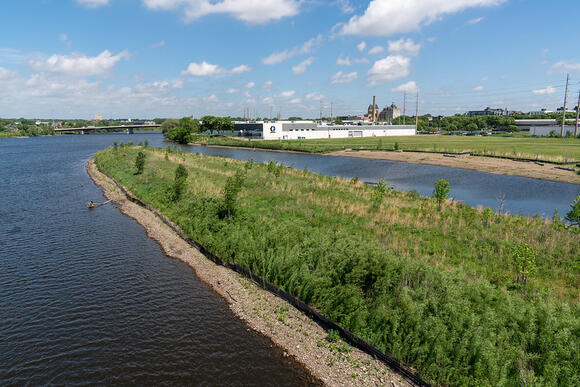 MINNEAPOLIS, MN — The Minneapolis Park and Recreation Board oversaw the reconstruction of Hall’s Island, which had been destroyed by industrial expansion in the 1960s.

The Mississippi Watershed Management Organization (MWMO) collaborated with numerous partners to support the island’s rehabilitation, which will provide a distinctive new park amenity and a valuable supply of habitat along the Mississippi River.

The site was excavated immediately north of the Plymouth Avenue Bridge to create a new channel that reseparated the island from the mainland. The project converted 1,000 linear feet of armored coastline into nearly 3,000 feet of habitat-rich shoreline during the process.

The new island has a rich assortment of native flora that will feed local animals and provide a safe rest stop for birds migrating through the Mississippi Flyway.

The RiverFirst Initiative prioritized the reconstruction of Hall’s Island as part of a long-term ambition to convert the Minneapolis riverfront from a degraded industrial zone to a welcome destination that blends public access with ecological benefits. It is also the first phase in a broader MPRB effort to create a new public park on the former Scherer Brothers Lumber Company property.

The island has been reconstructed from the northern edge of the Scherer site to just south of the Plymouth Avenue Bridge. The renowned Boom Island Lighthouse has been incorporated onto Halls’ Island. The strait between the island and the Scherer Site is 120 to 150 feet wide and 6 feet deep.

In 1963, Scherer Brothers purchased Hall’s Island from the City of Minneapolis. The corporation filled in the waterway connecting the island to the coast before paving over the land for industrial use. MPRB purchased the entire riverfront site in 2010, eventually removing the buildings and remediating the property’s toxic soils.

Hall’s Island has been rebuilt, although habitat restoration is still proceeding. Aside from the island, the planned park’s vision includes a gravel beach, boat rental and storage for paddlers, a park-supportive cafe pavilion and terraced meeting places. Hall’s Island will be connected to the mainland by two pedestrian bridges.

One Saturday to Celebrate Medina Day!

MEDINA, MN - It's Medina Day! Save the date, Medina residents! The local community is gearing up for a fun-filled evening of free entertainment that will feature activities with prizes for the children, face painting, balloon artists, and fireworks!

MINNEAPOLIS, MN – Farewell can be a special moment to wrap up the togetherness that has been passed and welcoming the new phase. Minnesota has a unique tradition of this, called the long goodbye. It is not just an ordinary party to comfort the loss but it relates to the characteristic of the city’s residents.

The debatable history of Golden Valley naming through its landscape

GOLDEN VALLEY, MN – Golden Valley is a village that was incorporated on December 16, 1886. The development started from the 1912 destruction of Electric Luce Line Railroad as the landscape supported agriculture to grow. There are farms, mills, and dairies to provide residents’ income.

MINNEAPOLIS, MN – Come to nature will be a great solitude experience as only serenity and beauty that you find. Department of Natural Resources shares the list of activities to spend the time in the wildland. Take a note of the treatment, so you will keep it sustainable.

MINNEAPOLIS, MN – Fairy tale serves picturesque image to entertain nor delivers its value for spreading hope. It is no longer imagination as there are magical spots in Twin Cities to lead your gratitude about life is good. Are you ready to explore the list below?

GOLDEN VALLEY, MN – Road salt and deicing chemicals are materials to melt snow. It is an easy attempt, therefore, followed by a negative impact. Fish nor plants cannot survive due to toxicity. Sewer, stream, and lake become too salty, ruining endemic organisms to grow within thirty years. These facts are found by Mississippi Watershed Management Organization, or MWMO, through research.

INTERNATIONAL FALLS, MN - Snow-covered mountains, frozen lakes, and frost-covered trees define the beauty of Voyageurs National Park. On Minnesota's northern border, Voyageurs is one of the few sites where you may see a winter landscape primarily devoid of highways and buildings. Look at what fun activities you can do there during the winter season!

MINNEAPOLIS, MN - In 1969, hundreds of African-American students protested at the University of Minnesota in Morrill Hall. The event led to the establishment of the university's Afro-American Studies department.

OAK PARK HEIGHT, MN - Located in Minnesota, the Oak Park Heights prison can house up to 471 male inmates. It is also known to house federal inmates with violent histories. This facility holds the majority of inmates at maximum and close custody. Some of them require a higher level of security.

MINNEAPOLIS, MN - We searched the area and sifted through hundreds of recommendations to offer you the most incredible tacos in the Twin Cities. This list includes three excellent taco shops, ranging from taco trucks to sit-down restaurants.

Get to know the history of Paramount Theatre & Visual Arts Center

ST. CLOUD, MN - The Paramount Theatre and Visual Arts Center is comprised of a refurbished historical theater, an art gallery, a visual arts workshop, and an office for art organizations in the organization. The Center hosts various performances such as plays, concerts, dance programs, and other activities. It provides exhibitions, seminars, and workshops for adults and children, in addition to a retail gallery showcasing the work of local artists.

Where to find halal restaurants in St, Cloud, Minnesota area

ST. CLOUD, MN - St. Cloud is a city in the state of Minnesota, and it is the most populous city in the state's central area. Without a doubt, the municipality would want to provide inclusiveness to its inhabitants and visitors and not exclude religion or personal views from this. Whether you're searching for halal alternatives in your neighborhood or want to try something new, each of these locally-owned eateries offers distinct tastes and a warm welcome.

COLLEGEVILLE, MN - Saint John's Abbey has been governed by the Benedictine ideals of stability, hospitality, and stewardship since it was founded in 1856. A state wildlife sanctuary was established on the abbey grounds in 1933, and the monks' commitment to the long-standing stewardship concept led to the establishment of a natural arboretum on the abbey grounds in 1997, which is still in operation today. Preservation, education, research, and spiritual renewal are currently the primary goals of Saint John's Abbey.

MINNEAPOLIS, MN - Graco Park, a new park along the Northeast Minneapolis riverfront, is being developed by the Minneapolis Park and Recreation Board, or MPRB. The Board is now seeking initial feedback from the community and has researched the site's opportunities and constraints. The site is located about north of the Plymouth Avenue Bridge and is traversed by the Mississippi East Bank Trail.

ST. CLOUD, MN - It doesn't matter if summer is drawing to an end or September has arrived in Greater St. Cloud; there's no lack of things to do. The colder temperatures are a welcome change, and they are the ideal complement to the numerous outdoor events taking place this month. Go to a circus or zoo, take a ride for caramel apples, see music at The Ledge, celebrate Pride, look at tractors, or raise a glass to Oktoberfest in the city.

PLYMOUTH, MN - Anyone who lives in east Plymouth or drives near Rockford Road and Highway 169 is certainly familiar with the Four Seasons Mall, a long-vacant, unappealing strip mall on the junction's southwest corner.

This October, the Plymouth Public Safety Citizens Academy will reopen

PLYMOUTH, MN - The Plymouth Public Safety Department reminds pedestrians and vehicles who share the road to be cautious of their surroundings. With over 324 miles of municipal roadways and 174 miles of trails in Plymouth, being safe while driving, walking, biking, and utilizing other modes of transportation is critical - and the Plymouth Public Safety Department provides reminders for both pedestrians and vehicles.

With the addition of new hotspots, networking at the Washington County Library is improving

LAKELAND, MN - With its mission to inspire curiosity, champion innovation, and spark opportunity, Washington County Library has installed 400 Wi-Fi hotspots and 100 Chromebooks to its inventory to assist citizens in using the internet outside of the library. The devices can be checked out for up to a month if you have a Washington County library card.