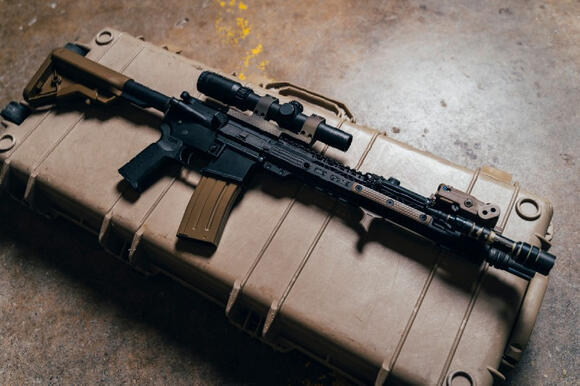 Photo by Bexar Arms on Unsplash

On June 4th, a federal judge declared that California's longstanding assault weapons ban does not comply with the U.S. Constitution.

According to the Los Angeles Times, U.S. District Judge Roger Benitez "issued a permanent injunction against enforcement of much of California’s ban on purchasing assault rifles." Notably, Benitez was nominated by George W. Bush as district court judge in 2003.

Here's what Benitez wrote in his 94-page decision on the matter:

Like the Swiss Army knife, the popular AR-15 rifle is a perfect combination of home defense weapon and homeland defense equipment. One is to be forgiven if one is persuaded by news media and others that the nation is awash with murderous AR-15 assault rifles. The facts, however, do not support this hyperbole, and facts matter...Government is not free to impose its own new policy choices on American citizens where constitutional rights are concerned.

The ban has been on the books since 1989, when California became the first state to pass such a law. It was spurred by the widespread dismay caused by a devastating mass shooting at Cleveland Elementary School in Stockton, California, which involved the use of an assault rifle, specifically an AK-47.

The 1989 law was met with obstinate resistance, since the California State Congress was under the iron grip of the National Rifle Association, which fiercely opposed any such ban. As a result, the passage of the law was regarded as a trailblazing victory at the time.

To the delight of advocates who support the ban, on June 10th, California Attorney General Rob Bonta appealed the Judge Benitez's ruling and stated that "strong common sense gun laws help curb not only mass shootings but gun violence as a whole."

Additionally, the LA Times reports that in late June, "a three-judge panel of the U.S. 9th Circuit Court of Appeals put Benitez’s ruling on hold pending decisions in gun cases that are now before the court."

Attorney General Bonta applauded that ruling, sharing the following on Twitter: "This leaves our assault weapons laws in effect while appellate proceedings continue. We won’t stop defending these life-saving laws.”

Currently, seven states in the country have enacted assault weapons bans. California, New Jersey, and Connecticut were the first three states to pass such bans, and they had the distinction of doing so before the Federal Assault Weapons Ban was passed in 1994.

Four other states enacted their own assault weapons bans before the federal ban expired in 2004, namely New York, Massachusetts, Maryland, and Hawaii. Such a ban also exists in Washington D.C., which has yet to be granted statehood.

Research has found that assault weapons bans are highly effective in mitigating gun violence and reducing deaths associated with guns. According to the Giffords Law Center,

The data also suggests that while state bans are effective on their own, reinstituting a federal ban should also perhaps be considered. The Giffords Law Center explains that, "during the 10-year period the federal assault weapons ban was in effect, mass shooting fatalities were 70% less likely to occur compared to the periods before and after the ban."

It remains uncertain whether opposition to California's assault weapons ban will be effective. For now, those invested in this high stakes issue will have to wait and see whether Benitez's attempt to overturn the ban will come to fruition.