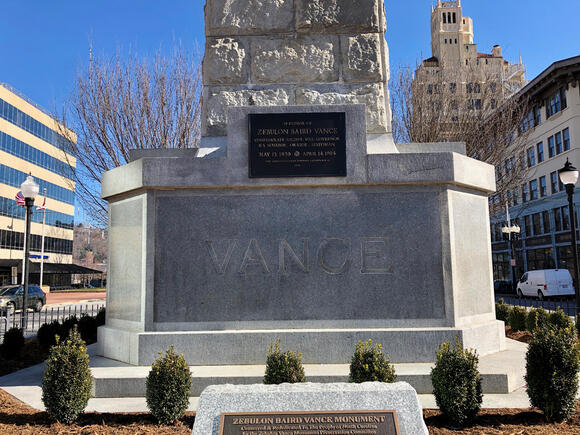 In May of this year, the city of Asheville began the process of demolishing the contentious Zebulon Baird Vance monument which stood in downtown Asheville.

The obelisk-shaped stone monument was erected in 1898 in honor of the Civil War-era governor of North Carolina. The cornerstone of the monument was laid in December of 1897 as a band played the song "Dixie," which was known as a de facto national anthem of the Confederacy and as one of the most celebrated songs to emerge from blackface minstrelsy.

The construction of the monument was partly funded by the United Daughters of the Confederacy. African American City Council member Keith Young contends that the intent of those behind the monument's creation was to send a message of intimidation and belittlement to black residents: "We still have power. We still have control. And this is your place in our society."

Its design was based on the Washington Monument in Washington D.C., and Richard Sharp Smith, the same architect who designed the Biltmore House in Asheville, contributed to its design.

The 65-foot monument was located in Pack Square downtown, and the following was inscribed on its plaque:

The impetus to remove the monument began gaining momentum during Asheville's incendiary George Floyd protests in 2020. Collective demands from Ashevillians prompted Asheville's City Council to vote on whether to remove the obelisk. In March of this year, that vote yielded a 6-1 victory in favor of destroying the Jim Crow-era monument.

Throughout the demolition process which started in May, opponents of the removal brandished Confederate flags and paraded around the town square.

The destruction of the monument cost the city a $114,150 contract with a company called Chonzie. The process has not been seamless: Throughout May and June, opposition from groups calling to preserve the monument stymied progress toward completing the demolition.

According to the Citizen Times, Asheville's local newspaper,

While demolition moves on, the city and a historical preservation group opposing the deconstruction are awaiting a decision by the North Carolina Court of Appeals. The state's second-highest court is deciding whether to halt the removal called for by the Society for the Historical Preservation of the 26th North Carolina Troops. The 26th N.C. Troops, which refurbished the monument in 2015 and said the demolition amounts to a breach of contract, said it was necessary to wait in order to see the outcome of a similar case in the N.C. Supreme Court.