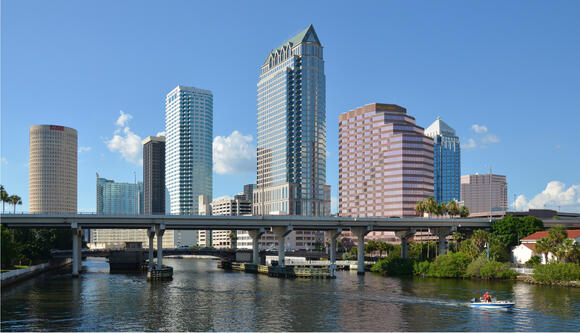 The Tampa metro area came in first, with a 35.8% increase in April compared to the year prior, with the Miami metro area close behind at 33.3%, followed by Phoenix at 31.3%. This is compared with the national average of 20.4%. The index analyzes a set of 10 and 20 major metropolitan areas known as the 10-City and 20-City composites.

Craig J. Lazzara, Managing Director at S&P DJI, noted that “There's a regional pattern among the nine, as all five cities in our South composite (Atlanta, Charlotte, Dallas, Miami, and Tampa) are represented there.” Housing prices saw the largest increases in the South (+30.6%) and the Southeast (+30.5%).

This comes at a time when Tampa is also experiencing a rental crisis, and first-time homebuyers are being priced out of the market. Tampa also has the 5th most overvalued rental market in the country, while Miami takes first place, according to a new study by Florida Atlantic University (FAU).

According to the report, the average rental price is $2,089 due to excessive demand. Tampa also has the 12th most competitive rental market in the country due to limited availability, with Miami again topping the list, according to RentCafe.

Research suggests that prices could be alleviated in the long term by creating a healthier supply-demand balance; in other words, this would entail building more housing. Another solution is rent control, a policy vehemently opposed by Tampa Mayor Jane Castor, who claims it would “kill development.” Instead, the mayor has offered a $5 million program of limited assistance to renters, which critics say amounts to a subsidy for landlords.

"It may look like they're putting a band-aid on the situation, but what the city and the landlords are really doing is scratching each other's backs," said Tampa housing activist Connie Burton. "Meanwhile, people are still being displaced by this crisis that the city refuses to address in an effective way."