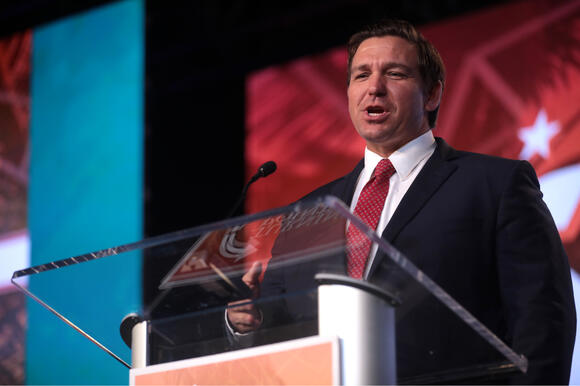 On Monday, Florida Governor Ron DeSantis passed a bill that criminalizes a form of protest that has garnered substantial press attention lately -- rallying in front of individuals' private residences.

The bill prohibits such protests even if they are contained within public spaces such as sidewalks.

As he expressed in a statement,

"Sending unruly mobs to private residences, like we have seen with the angry crowds in front of the homes of Supreme Court justices, is inappropriate. This bill will provide protection to those living in residential communities, and I am glad to sign it into law."

Earlier in May, reports that the Supreme Court was poised to nix Roe v. Wade elicited a veritable mutiny among reproductive rights activists, unleashing a flurry of protests in Washington D.C. Many of those protestors staged direct actions in front of the residences of Supreme Court justices. However, contrary to DeSantis's claims, reports suggest that these protests were peaceful.

Although DeSantis referenced these abortion-related protests as a justification for passing the bill, the legislation had already been conceived long before recent kerfuffles over Roe v. Wade.

In March, the bill had already received bipartisan support from the Florida Senate. The bill was sponsored by Republican Florida State Senator Keith Perry, who claimed that the bill is intended to target rogue protestors all along the political continuum. As Perry opined during a hearing,

"Some of us signed up for all of this, but our spouses, children and neighbors do not. There should be a difference between a public space and your dwelling."

He mentioned that the bill could curb harassment of local officials, citing the example of a Broward school board member who had been harangued outside of her home by conservative anti-mask protestors, who had coughed on her and taunted her children.

However, many other examples pertained to dispelling dissent directed towards conservative politicians, such as Rick Scott and Marco Rubio.

According to The Hill, the new legislation, which will take effect on October 1st, will "make it a second-degree misdemeanor to protest in a manner that is meant to intentionally harass or disturb someone in their home. Violators face 60 days in jail and fines up to $500."

Some free-speech advocates have voiced concern that this is simply yet another in a succession of bills that have deliberately curtailed the right to express opposition, rendering the left impotent.

For instance, Francesca Menes, who is a co-founder of the The Black Collective, asserted that the new legislation "builds on the unconstitutional foundations of the anti-protest bill last year and only reaffirms our will to make sure our voices are heard in order to create a brighter future for the people of our state."