Pittsburgh Steelers NFL Draft rumors are heating up with the draft less than a week away. In their latest 3-round NFL Mock Draft, Todd McShay and Mel Kiper took turns making picks and it resulted in the Steelers getting Najee Harris (RB, Alabama), Alex Leatherwood (OL, Alabama) and Shaun Wade (DB, OSU). Those are three well-known names and Steelers Talk host Tom Downey is on board with the first two. But drafting Wade after his rough 2020 season is very risky. 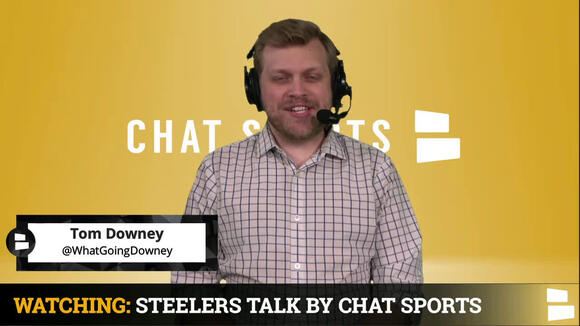 NFL Draft 2021: G Kendrick Green From Illinois was selected in 3rd Round by the Steelers. Chat Sports has full analysis of who the Steelers are getting in Green. Green from Illinois is now a member of the Steelers, giving Mike Tomlin a new offensive lineman in 2021. The hosts Harrison Graham and Chase Senior from Chat Sports break down what this could mean for the Steelers.

With the 55th pick of the 2021 NFL Draft, the Pittsburgh Steelers grabbed local product Pat Freiermuth from Penn State. The massive tight end will give Ben Roethlisberger another option in the passing game as he tries to finish off his career with another AFC North title and playoff appearance (or more!). What do you think of the pick? Grade it now in the COMMENTS section here on News Break!

Chat Sports VIDEO: The 2021 NFL Draft is nearly here and there are plenty of Pittsburgh Steelers rumors about the team possibly drafting an offensive tackle early. It’s clearly a need for the team, at least that’s what Steelers Talk host Tom Downey thinks. There are numerous options in both Round 1 and Round 2 for the Steelers to consider. But will they take one of them to help protect Ben Roethlisberger and improve the rushing attack?

The Pittsburgh Steelers appear focused on trying to win a title in one of Ben Roethlisberger’s last seasons in 2021. John Clayton reports the team doesn’t plan on drafting a QB during this year’s draft. QB is a long-term need, but with the Top 5 options expected to be long gone, taking someone like Kellen Mond, Davis Mills or Kyle Trask doesn’t make much sense around Day 2. The Steelers need help now and Steelers Talk host Tom Downey agrees with passing on a QB.

NFL Free Agent & former Pittsburgh Steeler Alejandro Villanueva has been testing the free agency market this offseason. Many people believed Villanueva was going to sign with the Ravens but new reports have surfaced that Baltimore will wait forcing the veteran left tackle to sign somewhere after the 2021 NFL Draft. Could the Steelers find a way to bring back the man who has been protecting Ben Roethlisberger’s blind side his entire career?

(VIDEO) Steelers Draft Rumors: Pittsburgh Has Narrowed Round 1 Targets Down To 3 Players

Pittsburgh Steelers draft rumors are pickup up with the 2021 NFL Draft set to begin next Thursday, April 29th. Najee Harris (Alabama RB), Teven Jenkins (Oklahoma State OT) and Landon Dickerson (Alabama Center) have emerged as 3 prime candidates for the Steelers with pick #24 in Round 1. Mitchell Renz takes a look at these 3 draft prospects and weighs in on who the Steelers should draft on today’s episode of Steelers Talk by Chat Sports.

Today’s Pittsburgh Steelers Mock Draft comes just days before the 2021 NFL Draft. This year’s draft starts on Thursday April 29th and the Steelers have the #24 pick in Round 1. In today’s mock, Pittsburgh selects Clemson RB Travis Etienne. Etienne is an explosive RB with a ton of production and experience coming out of college. He compiled over 6,000 yards from scrimmage and 78 touchdowns. Could Etienne be the James Conner replacement in Pittsburgh?

Pittsburgh Steelers Draft Rumors: Will Justin Fields Fall To The 24th Pick In The 2021 NFL Draft?

The 2021 NFL Draft is less than two weeks away and Pittsburgh Steelers draft rumors are wild. Steelers draft rumors swirl around the idea of Ohio State QB Justin Fields falling to the 24th pick in the NFL Draft thanks to NFL Network's Charlie Casserly’s latest NFL Mock Draft. Casserly stated how Fields would be a perfect fit in Pittsburgh but failed to mention the chances of him falling to pick #24. Chat Sports host Tom Downey points out how likely it is that Fields falls in round 1.

Steelers Rumors: Pittsburgh Planning To Draft A Running Back Early In 2021 NFL Draft?

The Pittsburgh Steelers haven’t had a bell cow since Le’Veon Bell left. Last year they were in the bottom five for most of the league’s rushing stats, and they have some decent talent in their running back room but they don’t have a 3-down back who can carry the load. With Ben Roethlisberger in the final stages of his career the team will need a reliable back to help shoulder the load of the Steelers offense. Chat Sports host Tom Downey breaks down the possible running back draft targets.

The 2021 NFL Draft is roughly 2 weeks away and ESPN draft analyst Mel Kiper Jr. has released his latest mock draft. Kiper did a 2-round mock this time and Steelers Talk by Chat Sports host Harrison Graham is providing reaction and analysis. Kiper has Pittsburgh selecting Alabama RB Najee Harris in Round 1 and North Dakota State OT Dillon Radunz in Round 2. Light up the comment section and let us know if you like the Harris or Radunz pick better!

James Conner has left the Pittsburgh Steelers officially, joining the Arizona Cardinals. His departure isn’t a total surprise, but it does underscore the Steelers’ need for a new lead back. Plenty of NFL Draft rumors have linked the Steelers to drafting a RB early, even in Round 1. Steelers Talk host Tom Downey breaks down the Top 3 targets for Pittsburgh in today’s video: Najee Harris, Travis Etienne and Javonte Williams.

The Pittsburgh Steelers have added another QB, bringing back Joshua Dobbs on a 1-year deal. The former Steelers draft pick has been a career backup and will fight for a roster spot behind starter Ben Roethlisberger. He joins a QB room featuring Big Ben, Mason Rudolph and also Dwayne Haskins. It’s a one-year deal for the QB. On today’s News Break Poll of the day: give host Mitchell Renz your 1-word reaction to Steelers signing Dobbs in the COMMENTS!

(VIDEO) The Pittsburgh Steelers have the 24th pick in the 2021 NFL Draft so Mitchell Renz from Chat Sports takes a look at the Steelers 2021 Draft picks, their 5 biggest team needs and potential draft targets to take in round 1. The Steelers draft needs are offensive tackle, quarterback, running back, cornerback, and tight end. There have been tons of Steelers draft rumors around who Pittsburgh will select at pick 24 in round 1 of the draft.

Video - The Pittsburgh Steelers have some decisions to make in the near future: What to do with Minkah Fitzpatrick’s and Terrell Edmunds’s 5th year options. Both players are due significant amounts of money on their options. It’s $10.612 million for Fitzpatrick and $6.753 million for Edmunds. Fitzpatrick is an easy yes; he’s arguably the best safety in the NFL. Edmunds is tougher. He’s coming off his best season, but that cost is expensive. Tom Downey from Chat Sports breaks it down.

Video - NFL Draft rumors are starting to pick up with the 2021 NFL Draft just a few weeks away. NFL Network’s Daniel Jeremiah released his latest 2021 NFL Mock Draft so Chat Sports’ NFL Daily host Mitchell Renz give his analysis and reaction to the Pittsburgh Steelers taking Oklahoma State Tackle Teven Jenkins. The Steelers have the 24th pick in the upcoming draft. Was taking Jenkins a good pickup for Mike Tomlin’s team since Ben Roethlisberger isn’t getting any younger?

The 2021 NFL Draft is just over 3 weeks away and the Pittsburgh Steelers hold the #27 overall pick in Round 1. The Steelers could go in several different directions with their first round pick, but host Harrison Graham takes a look at 3 players that Pittsburgh should target. Oklahoma center Creed Humphrey, Alabama RB Najee Harris and Georgia EDGE Azeez Ojulari are 3 players that could fill needs for Pittsburgh in 2021. Get in the comments and let us know who the Steelers should draft at #27.

Pittsburgh Steelers free agent news and rumors takes a look back at the JuJu Smith-Schuster signing. Schuster reportedly said this past week that if he had not re-signed with the Steelers, he would have signed with the Kansas City Chiefs in NFL free agency. Smith-Schuster also mentioned that he did consider signing with Baltimore but could not stomach playing with the Steelers biggest rival. Steelers Talk host Thomas Mott breaks it all down on this video brought to you by Chat Sports!

The Pittsburgh Steelers could use some help at cornerback after losing Mike Hilton in free agency to the Cincinnati Bengals and recently releasing Steven Nelson. Steelers Talk host Harrison Graham takes a look at three CBs Pittsburgh could sign in NFL Free Agency. Richard Sherman is the top name out there as he remains unsigned. Sherman says he wants to play 2 more years for a contender. Casey Hayward and Josh Norman are two other veteran options Pittsburgh could look at.