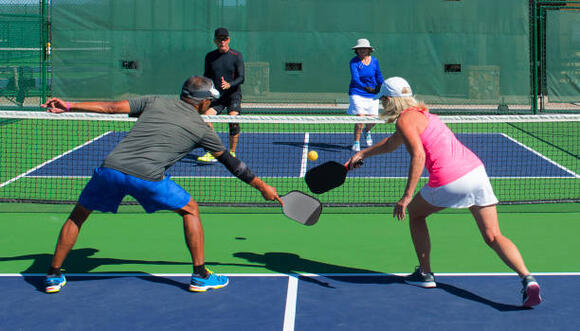 The naming of the sport has two origin stories. One claims that one of the sport's founders' wives, Joan Pritchard, called it pickleball because the combination of different elements of different sports reminded her of the "pickle boat" in crew competitions where the boat comes in last, and therefore athletes were like Charlie Brown - the last people chosen for the next race.

The second theory is that the sport was named after one of the founders' dogs, Pickles. Perhaps both are true. Maybe neither are. But whatever the backstory, pickleball seems to be here to stay.

One enticing aspect of pickleball is that players don't have to buy expensive gear or apparel. All that is needed are two paddles, a net, a ball, and a court.

The paddles resemble ping-pong (or table tennis) paddles, but they are a bit larger. They are not as big as tennis rackets, and are solid, instead of netted, like tennis rackets. The paddles can be made from several different materials: wood, graphite, aluminum, and other composite materials.

A wiffleball was originally used in the game, but as time has gone by and popularity has increased, pickleballs have replaced the original wiffleball. The ball is still very lightweight and has holes, but with new rules, the proper ball to play with depends on indoor or outdoor use, as well as USAPA guidelines for "official" balls.

The net, unlike many volley sports, is close to the ground, and official play dimensions are 36" high at the sidelines and 34" high at the middle. The official court size is 44' long and 20' wide, which includes the lines. It is basically the size of a doubles badminton court.

The sport has become so popular that a chain restaurant called Chicken N Pickle has been opening locations across the nation. A full menu is offered, as well as outdoor pickleball courts.

To learn more about pickleball or how to start your own games, click HERE.

The Night Watchman is often seen still doing his jobStacey Doud. Dave Besgrove, the owner of Grape Vine Springs Winery in Grapevine and Cowtown Winery in Fort Worth, didn’t grow up with dreams of becoming a vintner or a ghost hunter. His story is not unlike many others: He graduated college and went right into the corporate world. But then, forces beyond his control altered his life path forever…and ever…and ever.

Demonstrators supporting Ukraine in Grapevine on March 20Deb Hinton. The First Presbyterian Church in Grapevine sponsored a peaceful demonstration in support of Ukraine on Sunday, March 20 at Peace Plaza, located under the clock tower of the new Grapevine Main.

March is full of lesser-known and even strange "holidays." Check out my previous articles to see what you may have missed!. Make Your Own Holiday Day is the perfect day to celebrate whatever you’d like! The only guidelines are to make sure that your chosen topic for celebration is not already an official or unofficial holiday, and, of course, be courteous to your fellow humans.

March is full of lesser-known and even strange "holidays." Check out my previous articles to see what you may have missed!. National Goof Off Day was allegedly created by Monica "Moeller" Dufour from Michigan and her grandfather. Dufour's granddad was a radio DJ, and when Dufour was around the age of 10, she called into his radio show anonymously, suggesting "Goof-Off Day," most likely because she had been goofing off. A local newspaper heard the suggestion and Granddad's thought that it was a great idea, even though he had no idea who called it in. Dufour confessed the next day, but since an article was already in the paper, National Goof Off Day was born.

March is full of special days in addition to St. Patrick’s Day. Not only is the first week of March "holiday" heavy, but March 6 – 10 also offers up a bounty of things to throw a party for!

March is right around the corner, and while many people look forward to drinking green beer on St. Patrick’s Day, there’s more to March than flat beer. Here’s what to look forward to from March 1 – 5:

Who is Buried in the Tomb of the Unknown Soldier?

The Tomb of the Unknown Soldier in Arlington, VAArlington National Cemetery. This Veterans’ Day (November 11, 2021) celebrated the 100th Anniversary of The Tomb of the Unknown Soldier with parades, military flyovers, the placing of flags, and other events. The Tarrant CountyVeterans’ Day parade featured the U.S. Army Golden Knights, the Army’s aerial demonstration team, which included crew members skydiving over the area.

Irving ISD retirees don’t necessarily sever any ties to the schools they served. The Irving Retired School Personnel Association (IRSPA) serves as a resource for retired schoolteachers and staff to promote the cause of education through providing scholarships for graduating high school seniors who are going to be future educators, providing educational services in health and safety, and providing books to elementary students.