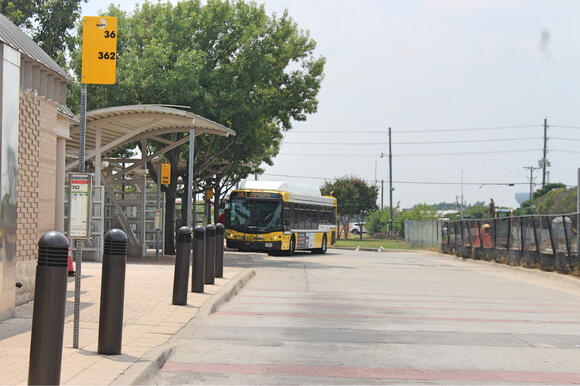 A DART bus arrives to pick up passengersStacey Doud

People in the Dallas/Ft. Worth Metro Area have depended on the Dallas Area Rapid Transit system (DART) for almost four decades. In fact, DART is celebrating 25 years of light rail service this year; however, the bus system became operational with routes to the suburbs in 1987. The light rail system keeps expanding, and the much-anticipated Silver Line is due to be functional in 2024.

“We are continuing our platform extension project, which consists of a total of 28 DART stations throughout the network. We've been able to extend the platforms to allow for three-car trains. So, when DART first began the starter system, all we needed were two cars. As the area has grown and as our ridership had grown pre-pandemic, we realized the need to expand to three cars from two, increasing ridership by 50%. The pandemic slowed us down, but we still have plans to keep going and have all of [the tracks] replaced by 2024, thanks to a Federal Funding Grant Agreement (FFGA)," Shattles said.

At the City Line/Bush Station, located at 1300 East President George Bush Highway in Richardson, the DART Silver Line is scheduled to go into operation in the fourth quarter of 2024. Workers have already begun laying the foundations for what will eventually be the double-track line coming through this station. Currently, the area is already served by City Line/Bush Red and Orange Line Light Rail.

"The vehicles for the Silver Line will be diesel-electric vehicles, doing away with the need for the overhead [power] lines,” said Shattles.

In anticipation of the Silver Line, many restaurants and stores have opened in the immediate area. "When the project was announced, it wasn't long before we saw several businesses that will cater to riders pop up along this little corridor," Shattles said.

For passengers’ information, if they’re not sure where to go, DART kiosks have been placed around the network.

“We have scheduled 300 of the DART kiosks to be placed throughout the DART network, providing everything from train routes and timing to different locations in the network. But also, we partnered with 'Smart Cities' to provide information about restaurants and local points of interest that would serve our customers,” Shattles said.

The Addison station, which was part of the original Cotton Belt, still had some of the old tracks, which are just waiting to be removed, graded over, and cemented in anticipation of the Silver Line.

“Now, Addison was one of the original 13 DART service area cities. Since the beginning, Addison has not been served by light rail. We have one of the very largest bus stations at our bus transit center in the City of Addison. So, as you can imagine, Addison has been looking forward to the Silver Line for a very long time. When we had the first groundbreaking in September of 2019, the excitement from both the elected officials and the people of Addison was very impressive. Addison is well known for several festivals, some of which are the largest festivals in the DFW area, including Oktoberfest and the ‘Fourth July Kaboom Town.’ They believe that the light rail service will be a great addition to try to alleviate traffic in the area, but also to extend the growth they've experienced so far,” Shattles said.

For more information about the new and improved DART system, or to inquire about the various services that DART provides for seniors and the disabled, visit DART.org.

Who is Buried in the Tomb of the Unknown Soldier?

The Tomb of the Unknown Soldier in Arlington, VAArlington National Cemetery. This Veterans’ Day (November 11, 2021) celebrated the 100th Anniversary of The Tomb of the Unknown Soldier with parades, military flyovers, the placing of flags, and other events. The Tarrant CountyVeterans’ Day parade featured the U.S. Army Golden Knights, the Army’s aerial demonstration team, which included crew members skydiving over the area.

Irving ISD retirees don’t necessarily sever any ties to the schools they served. The Irving Retired School Personnel Association (IRSPA) serves as a resource for retired schoolteachers and staff to promote the cause of education through providing scholarships for graduating high school seniors who are going to be future educators, providing educational services in health and safety, and providing books to elementary students.

The Irving Arts Center is offering two new exhibitions, featuring artists Bob Nunn and Yikwon Peter Kim. The opening reception was held on Nov.6, and the exhibits, titled, “Bob Nunn: A Retrospective” and Yikwon Peter Kim: “Inevitable Progression III” will be available for viewing until Nov. 13.

Mrs. Opal Lee gives a big hug to Raveen AroraStacey Doud. A historic luncheon at which Mrs. Opal Lee, 95, who is known as the “Grandmother of Juneteenth” because of her activism to make June 19 a federally recognized holiday, met with Raveen Arora, 72, a Nobel Peace Prize nominee, for the first time on November 10 at Hackberry Creek Country Club in Irving.

The Irving Archives and Museum (IAM) had closed shop in 2020 for remodeling. After being delayed by the pandemic, they were able to hold their grand opening and ribbon cutting on Nov. 13 with an Ice Cream Social. They had kicked off the celebration the previous evening with a “Rum Runners and Rug Cutters Party,” with patrons and staff dressed up in 1920’s attire, which was a nod to one of their current exhibitions, “Spirited: Prohibition in America.”

The Tarrant County Veteran’s Day parade was held Thursday, Nov. 11 beginning at 11 am. This year marked the 102nd annual event. The theme for this year was “Battlefront at Home… Saluting our Veterans and First Responders.” The parade was organized by the Tarrant County Veterans Council (TCVC). This annual Veterans Day Parade honors all of America’s veterans and their service to the country.

University of Dallas Gives Back to Communities

On Nov. 6, some of the faculty, alumni, and current students at University of Dallas visited 40 homes in their Irving community to provide outdoor and indoor services for residents in need. This inaugural service project, named “The Big Event,” is just the beginning of what organizers hope will be an annual event.