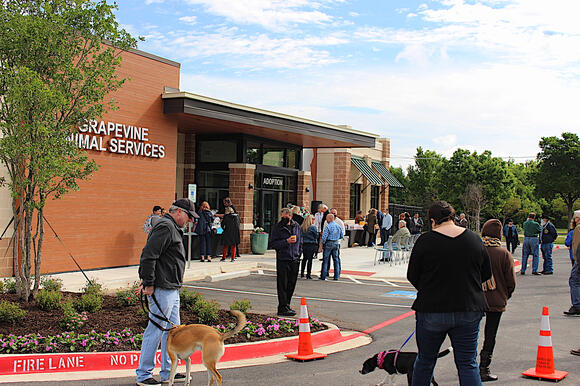 I was driving by the Grapevine Animal Services and Adoption Center back in 2019 and was shocked to see construction fences all around it. Eventually, it ceased to exist! The whole building had been leveled.

Fortunately, I also saw some workmen out there doing something. I asked one of the guys what was going on, and he said that the Center was going to be rebuilt. I couldn’t figure out why he seemed to be blushing until I got back in my car and saw I was still in my pajamas! Fortunately, they were modest, but I must have looked strange!

I found out that the new building had been funded by a 2017 bond election. In the meantime, while the shelter was closed, Grapevine was able to depend on Coppell’s Animal Services to help out so that abandoned, found and surrendered animals would have somewhere to go.

As Animal Services falls under the umbrella of the Grapevine Police Department, I was glad to receive an invitation to a “Dedication and Ribbon Cutting” for the brand-new Animal Services Building that was to take place on April 17.

As a journalist, I try to form relationships with local authorities, like the Public Information Officer (PIO) at Grapevine Police Department and members of City Council. Yet, I can’t believe how many events and adventures are continually going on in my fair city!

On April 17, I drove up to the new building and noticed how large it was! It is about four times larger than the old facility, measuring 13,500 square feet, compared to 2,600 for the old building. It contains new, up-to-date features such as sound-reducing panels, wall colors that are scientifically proven to have a calming effect on animals, solar lights, more windows for natural light, separate rooms for animals to meet their potential forever families, state-of-the-art veterinary tools and separate spaces for parties and educational programs.

The outside, which used to be very small and, honestly, kind of depressing, are now beautiful, covered, fenced-in courtyards and covered semi-open areas where dogs can get some much-needed exercise. 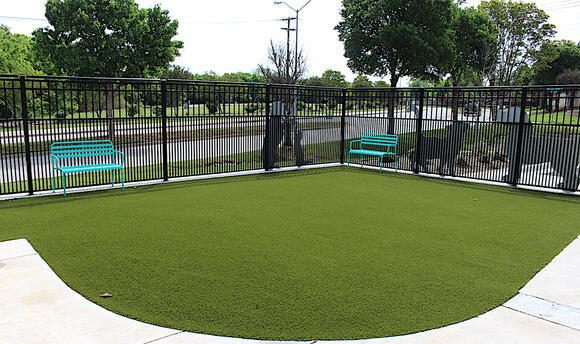 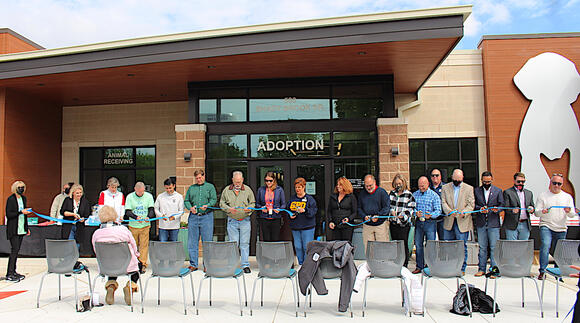 I talked a bit to Chief Hamlin about his agency’s role in the project.

“As a police department, we were pretty heavily involved. Kristina Valentine, the supervisor over the shelter, was the ‘tip of the spear’ for us and this project,” Hamlin said. “But she and I spent a great deal of time talking. I have an internal team that was devoted to just kind of talking about [the project], whether it be design, workflows, brainstorming and that kind of thing." 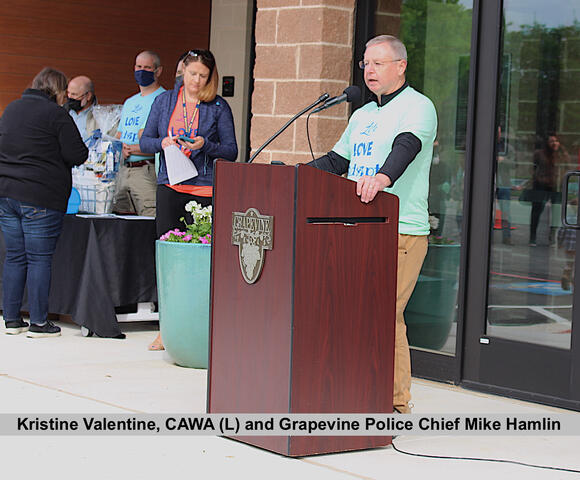 During the planning stage, Valentine, Hamlin and members of City Council toured several local animal shelters to see what was going on in other places.

“I think the medical piece of this shelter is profound. So many [medical suites] that we visited, and I understand why, were converted closets, or they would identify a ‘dead space,’ in their building, and they would construct a little cut-out to be able to put a table in there with the necessary supplies for them to do surgeries,” Hamlin explained.

“I give a lot of credit to our councilmembers that toured with us. They saw [that issue], and they really understood first-hand the importance of if we were or were not going to move in that direction, and we had conversations about it. Ultimately, that was not the direction they wanted to go. They said that if we’re going to [have a medical suite], then let’s find a way to do it right,” Hamlin said.

I had such a good time meeting new people and petting their canine companions. One sweet dog decided that she wanted to say hello, and so I scratched her ears and her back, and she had me and her person laughing by rolling over for tummy scratches! I’m so glad that this City service is back up and running!

It's not very often that one finds neighbors who do super-tradidional jobs anymore - like baking bread, churning butter and acting as a shepherd. Grapevine resident Mohammed Benali has lived in in the city for about 13 years. He owns a parcel of very valuable grassy land on the corner of N. Main Street, which is just steps away from all the festivals and events that are held on S. Main Street.