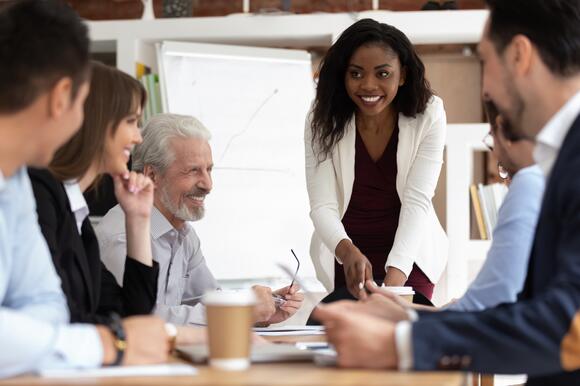 “Anthony, as you know, I’ll travel to Spain tomorrow, my flight is at 7 pm, do you mind if I leave 10 minutes earlier so I can catch the train to the airport?”

“I think it’s better if you leave one hour earlier, just in case. Let’s check the train timetable together.”

“Of course I do. You’ve always worked so hard, and you’re one of the most productive employees here. The least I can do is to make sure you don’t miss your flight. I know you’ve waited for this trip for a long time, and I think you deserve it.”

I was shocked. It was the first time in my career I felt treated as a person — not just as an employee or a number. My manager was not only allowing me to leave much earlier than I expected, but he was also helping me organize my trip to the airport.

Throughout my career I’ve met only few leaders like Anthony. If we take a closer look at those mature leaders who truly earned other people’s respect, we will see they tend to have in common the following five habits.

1. They Admit Their Mistakes

“More people would learn from their mistakes if they weren’t so busy denying them.”

Mistakes happen. And when they do you can’t travel back in time and change things. However, what you definitely can do is decide how to behave after making a mistake. You can either deny the truth and blame others, or admit what you’ve done and apologize.

As Jim Whitehurst explains in an article published in Harvard Business Review, admitting a mistake, and saying you’re sorry is essential to build your credibility and authority to lead. It’s a sign of strength, not weakness.

Mature leaders know this. And this is one of the reasons people tend to respect them more than they respect managers who don’t take responsibility for their mistakes.

Mature leaders always do what they say they’re going to do. If something takes more time and efforts than they thought, they let you know.

Keeping your promises is a sign of integrity, and if you’re not able to do so, chances are you won’t be respected as a leader, because people are not going to trust your word in the long term. When you keep your word, instead, people will see strength, and you’ll start to earn their trust.

As Tim Clairmont explains in an article published in Forbes, in every relationship there’s a certain level of trust, which can be compared to a bank account. In particular he states: “Every time you make a promise — any promise — you make a contract that will result in either a deposit or a withdrawal in the trust bank.”

I love the way Clairmont’s concept explains how trust works.

3. They First Seek to Understand, Then to Be Understood

As Stephen Covey explained in his masterpiece The 7 Habits of Highly Effective People, making an effort to understand others is an habit successful individuals have in common.

In particular, Covey talks about empathic listening, which means you should listen until the other person feels understood.

Mature leaders know the importance of listening and making other feel understood, especially because understanding others is key to good and healthy decision-making processes and prevents conflict.

4. They Respect Your Life Outside of Work

Mature leaders genuinely care about others.

A perfect example of this is Carlie Bush, VP and HR Service Delivery at Global Medical Response. I recently stumbled upon one of her LinkedIn posts, where she talked about an interview she had with a candidate via video chat. The candidate apologized because she had a toddler who she hoped would be napping — however, that was not the case.

See, leadership is all about bringing out the best in others. If you put others at ease, you make it easier for them to contribute in a meaningful way and perform well. As mentioned in an article published in Harvard Business Review, work-life balance starts with leadership.

5. They Delegate to Empower, Not to Get Rid of Their Tasks

Mature leaders work hard, usually more than the rest of the team. They are part of the team, and they don’t need to feel they’re above anyone.

An example of this is Matt, one of the best managers I’ve ever worked for. He was not just our team leader, he was truly part of the team, and probably one of the most hard-working team members. During the days we had to deal with a high volume of work, he worked with us and dealt directly with our customers, even if it wasn’t his job. And every time he did, he was amazing, he knew the job.

Also, another thing Matt often did was delegating some of his tasks. He wanted us to gain some managerial experience, so every week he chose one of us. He didn’t do it to save time, he worked hard and stayed at the office until 9 pm almost every day. It was clear he wasn’t the type of manager who tried to get rid of his tasks. He did it to give us more responsibilities, which eventually made all of us grow.

If you want to be respected as a leader, the first thing you need to keep in mind is you don’t have to be perfect. In fact, the opposite is true. It’s being human, vulnerable, and empathetic, admitting your mistakes, respecting your employees’ life outside of work, and empowering others, that eventually will help you build trust and earn respect.

Opinion: Can You Really Grow Your Glutes?

Summer is right around the corner, and many people want to know how to grow glutes so that they can show off a firmer butt at the beach. Thankfully, the best glute exercises are simple yet extremely effective. You want to grow booty to look great in a pair of shorts, so check out this comprehensive guide on how to grow glutes quickly.

Opinion: Can You Feel Healthier and Younger?

There are people who look much younger than their age. Is there a secret formula to that? Is it genetic? Are they particularly lucky?. The answer is no. You can feel and look younger if you want, but you’ll have to build some healthy habits.

Here Are Some Nice Date Ideas in Dallas

If you're here, I'm pretty sure you're about to go on a date with someone you want to impress. And you don’t want to stick with the old, boring routine of dinner and drinks - or just drinks.

Opinion: Are You Feeling Stuck?

Some people are good at what they do. Some others are outstanding. Then, there are people who can be defined unstoppable; they seem to excel in every area of their life. You continuously see them reach new goals and grow.

Opinion: How You Can Balance Freelancing with a Full-Time Job

In this article, you will learn how to balance freelancing with a full-time job. Getting a pay raise is not easy. However, if you want to increase your current income, there are some alternatives to asking for a salary increase; for example, applying for another position in your company or elsewhere, getting promoted, or giving yourself a pay raise through a side hustle.

Looking for some of the best, most unique date ideas in New York? Then this article is definitely what you were looking for. Whether you’re looking for a great place for your first date or you want to impress your partner, we got you covered.

Here Are Some Nice Date Ideas in Miami for This Spring

Whether this is your first date or it’s just a night out with your spouse, since you’re here, I’m pretty sure you want it to be unique and romantic. What follows are some of the best things you can do in this magical city.

Opinion: Are You a Bad Listener?

In this article, we will talk about bad listeners and some annoying habits they have in common. If you’ve ever dealt with someone who interrupts you as soon as you start a sentence, you probably know how frustrating it can be.

Opinion: What If She Feels Something for You?

In this article we will talk about how to tell if she’s into you and the signs she’s falling in love with you. Getting to understand what’s inside the mind of a woman can be challenging.

Opinion: What Does "Feminine Energy" Mean?

If you did, you probably wondered what that even means. Am I right?. Is it something only gorgeous women have? Is it some kind of spiritual concept?. First of all, to understand feminine energy, it’s important to understand the concepts of leading energy and polarity.

Some Fun Date Ideas in Los Angeles for This Spring

In this article we will talk about some of the best day and night date ideas in Los Angeles for this spring. Let’s be real, coming up with an original and unique date idea is not always easy.

In this article we will talk about the alpha female, her personality traits, how she behaves in a relationship, and what makes her so desirable to high-quality men. Chances are that somewhere in your travels across the internet, you’ve already stumbled upon this term.

Gaslighting is a form of abuse and it’s very common in unhealthy relationships. According to Psychology Today, “Victims of gaslighting are fed false information that leads them to question what they know to be true. They may end up doubting their memory, their perception, and even their sanity.”

Happy Couples: Five Habits They Have in Common

Ever wondered why some couples are truly happy while some others struggle? Do they have some secrets? It certainly looks like they do. We often hear that relationships need work, but no one tells us what exactly we need to do.

6 Rules to Stop Being a People Pleaser, According to Experts

People pleasing is the opposite of self-respect. And unfortunately, many of us have this habit. See, being a people pleaser means you don’t live on your own terms. You believe you are just being easy to deal with, super helpful, and kind.

How to Develop Likability: 5 Habits of People We All Tend to Like

Some people seem to be effortlessly likable. As a consequence, many of us often wonder if they were just born like that or if they learned the behaviors that, over time, helped them become so charming and well-liked.

If they say love is blind, there is a reason. Many people can’t see their partner’s faults when they’re falling in love with them; or they see those defects, but are unwilling to recognize them. And this is how many toxic relationships develop over time.

Building a healthy relationship is not easy. It’s hard. Because it takes two emotionally mature individuals to make it work. It takes two people who already feel complete as individuals and who don’t expect a potential partner to resolve all their problems or to fill a void.

Years ago, I went for a coffee with my friend Elsa, and she invited a friend, Laura. The moment Elsa went to the ladies room, Laura and I had a conversation, which ended up being full of awkward silences.