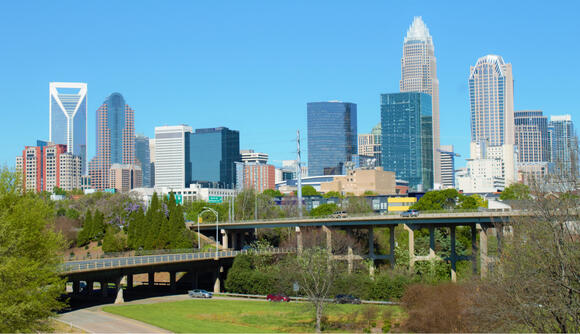 RAMP CLT is administered by local nonprofit DreamKey Partners, which has upped its staff to handle increased application volumes.

The new application period starts on Aug. 1, a month after North Carolina ended its eviction moratorium and a day after the federal moratorium is set to end on Saturday. But that should have little impact on whether tenants can apply for and receive assistance, says Hannah Guerrier, a supervising attorney at Legal Aid of North Carolina's Charlotte housing office.

"The end of the moratorium simply puts a shorter timeline on things for tenants and for the rental assistance agencies because landlords will be able to move forward with nonpayment eviction cases come August 1," Guerrier said. "It is my understanding that DreamKey case workers are doing their best to process applications as quickly and accurately as possible."

Legal Aid of NC, a Raleigh-headquartered nonprofit, provides legal advice and representation to low-income residents across the state. Sean Driscoll, Legal Aid's director of public relations, says housing-related calls to the organization's statewide toll-free helpline have skyrocketed since the start of the pandemic. From January to May of this year alone, the helpline received 116,000 calls.

"On certain days in late May, the helpline received over 1,500 calls per day," Driscoll added. "I can’t tell you exactly how many of those calls were housing-related, [since] we don’t have the staff to answer all the calls that come in, but I can tell you anecdotally that most of them were about housing."

Guerrier also says the Charlotte office has seen consistently high call volumes throughout the pandemic, and she expects demand will increase when local courts catch up with moratorium cases.

"Though we have not seen an uptick yet, the clerk of court is now sending out court dates for all the cases continued during the moratorium and we anticipate receiving more calls once tenants get these new court dates in the mail," she says.

Juan Hernandez, an attorney at local nonprofit Charlotte Legal Advocacy, echoes these observations, saying his office has received "a frightening level" of eviction referrals. "For a six-month period ending in March 2021, we saw a six-fold increase in housing referrals over the prior six months," he said.

Hernandez added that while RAMP and many nonprofits are doing the best they can with the resources available, delays will naturally occur given the broad scope of the program.

The RAMP CLT website says the City of Charlotte's assistance program started in February with $24 million and, as of June 30, about $14 million had been distributed. And Mecklenburg County's program, which launched in April, has distributed about $6 million of the $6.7 million allocated as of June 30.

The City of Charlotte's Housing and Neighborhood Services unit stated on Tuesday that over the course of the pandemic, the city has granted $33.7 million in rent, mortgage and utility assistance to over 11,400 families. So far in 2021, the RAMP program has provided $16.2 million to 5,160 families.

According to a recent release from the U.S. Department of the Treasury, more than $1.5 billion in federal funding was delivered to households nationwide in June, more than all three previous reporting periods combined. The number of households served (about 290,000) increased 85% from May and has nearly tripled since April. Though the national distribution rate averaged 20%, the City of Charlotte has distributed 52.5% of the emergency funds, the city says.

The re-opening of the RAMP program comes as local rent prices saw a sharp uptick in July. According to Apartment List's August 2021 Charlotte Rent Report, rent costs increased 2.7% over the past month—representing a 13.3% jump from this time last year.

Apartment List also reports that median rents now total $1,206 for a one-bedroom apartment and $1,348 for a two-bedroom, and prices have consistently crept up for nine consecutive months. While Charlotte's year-over-year rent growth fell behind North Carolina's average of 13.6%, the city still surpassed the 10.3% national average.

Even before the pandemic compounded existing trends, increased housing costs and the ongoing population boom have left more than 55,000 locals without an affordable place to live, which equates to a gap of 32,000 affordable housing units. In 2019, cost-burdened renters accounted for 45% of all renters in the region.

The City of Charlotte spent about $33.5 million of its affordable housing funds to build over 4,400 units in 2020, per data from the city's Housing Services Dashboard. But Mecklenburg County is still short about 23,000 rental units for extremely low-income households that earn less than 30% of the median income for the area, according to the 2020 Charlotte-Mecklenburg State of Housing Instability and Homelessness Report.

The eviction moratorium offered some respite for renters who fell behind on payments in the pandemic. The Charlotte Journalism Collaborative reported earlier this month that local evictions fell 51.73% last year due to the moratorium, but 1,070 eviction filings were pending at the Mecklenburg County court as of the last week of June 2021.

Asked if the RAMP program adequately addresses Charlotte's housing challenges, Guerrier said that the current problem is more than one program could ever endeavor to fix.

"The availability of affordable housing in the Charlotte area remains a big issue, especially for tenants who are looking to lower their expenses after experiencing income decreases," Guerrier adds. "This piece of the current problem is a much larger issue than immediate rental assistance—while still exceedingly important—can address."

Still, Guerrier says the RAMP program is distributing significant relief to tenants across the county who have faced income losses during the pandemic.

"While there are complaints about the application processing times, our local program is actually distributing funds quite efficiently when compared nationally," she adds. "These funds have gone a long way to helping tenants stay in their homes when landlords agree to accept the funds."

"People will continue to struggle paycheck to paycheck because of the increased cost of housing," Hernandez says. "Further, the city and the county need to ensure that affordable housing gets built in high opportunity areas."

Applications for the latest round of RAMP CLT relief are set to go live on Sunday, Aug. 1. In addition to rent funding, the program also provides assistance for water, gas and electric expenses, and helps cover costs for people living in hotels.

To be eligible for the RAMP program, renter households must include at least one individual who qualifies for unemployment or has experienced reduced income, incurred significant costs or experienced financial hardship caused by the pandemic. They must also demonstrate a risk for homelessness or housing instability and have a household income at or below 80% of Charlotte's area median income (or AMI), which ranges from $3,900 per month for an individual to $7,350 per month for an eight-person family.

For the upcoming round of applications, RAMP CLT will prioritize renters who have been served an eviction notice and are scheduled to appear in court within 90 days of their application. Second and third priority will be given to people who have been unemployed for 90 days or more and fall under 30% of AMI ($1,463 per month for individuals) and 50% AMI ($2,438 per month), respectively. Applicants who have been unemployed for over 90 days or have income below 50% will be prioritized next, followed by applicants that earn between 60% and 80% of AMI.

The maximum amount of relief available will cover outstanding rent payments retroactive to March 13, 2020, and up to three months’ rent forward.