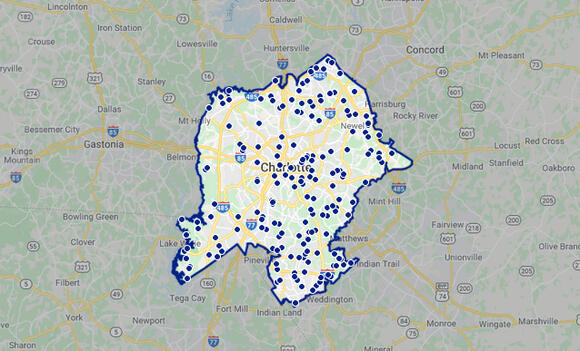 Map of homes for sale in Charlotte, via Trulia.Trulia.com

As you might have heard, Charlotte's real estate market is exploding. Over the past year, the number of new listings and closed sales jumped 6.1% and 24.8% in the Charlotte metro area, respectively, per Canopy Realtor Association data.

The city continues to be a seller's market, as the average home sold for 1.46% above the asking price in May, according to Realtor.com. At the same time, Charlotte's home values have increased 16.4% over the last year.

There are plenty of metrics that offer a deeper look at these trends and what's driving them. Below, we'll highlight five interesting data points underlying the Queen City's real estate market boom:

Redfin's Compete Score offers a glimpse into just how hot Charlotte's housing market truly is. Homebuyers have a growing preference for suburbs, as towns on the city outskirts remain highly competitive.

Compare that to nearby cities like Concord and Fort Mill, both labeled 75 or "very competitive" on Redfin. In both towns, homes often get multiple offers, some with contingencies waived, and the average home sells for 2% above the list price and goes pending in about 20 days. In Concord, "hot homes" typically sell in three days for 7% above the listing price, while in Fort Mill, hot homes sell for 5% above the list price over two days.

Even more competitive is Indian Trail, a town of about 39,000 people located 30 minutes by car from downtown Charlotte. With a score of 82 or "very competitive," homes in Indian Trail usually receive six offers on average and sell 4% above the list price in around two weeks.

Building permit data offers a glimpse into investor and consumer confidence in the economy.

Per data from the Federal Reserve Bank of St. Louis, the number of newly authorized building permits for private housing structures (1-unit to 5-unit structures or more) usually fluctuates from month to month in the Charlotte-Concord-Gastonia MSA. Since this is the typical market dynamic, 2021 is no different. But zooming in over the last few months, the number of new multi-unit private housing structures slid from 2,943 in March to 2,097 in May. That's after a brief uptick in February, before returning to January levels.

Last year, new private housing structures naturally hit their lowest point in April, with 1,253 permits authorized. They picked up again the following month, totaling 2,622 permits in June 2020—the last time the number of new permits exceeded that of March 2021.

Listing prices are skyrocketing in the Charlotte MSA. According to a recent report from the Canopy Realtor Association, that was certainly true in May, with the average list price at $409,502 and an average sales price of $406,194—up 7.2% and 28.5% from May 2020, respectively. Meanwhile, the month's supply of inventory fell 66.7% from this time last year. This indicates that the pace of home sales exceeds the supply of homes to be sold, thus sending prices soaring.

Looking at the Federal Reserve Bank of St. Louis' housing inventory data, the average list price has declined significantly since its peak in April, marking a shift in the post-pandemic housing market. While last month's year-over-year listing prices represent a 9.26% jump from June 2020, they've dropped significantly from the 29.78% year-on-year growth seen in April.

Migration grew significantly in the Charlotte area last year with 3.8 move-ins per 1,000 residents, according to a recent report from CBRE. Comparatively, 2019 saw 2.5 move-ins per 1,000 people. This trend dominated in the south's Sun Belt states last year, as similar rates of acceleration were seen in Atlanta, Dallas, Austin, Dallas and other southern cities.

Charlotte's industrial market demand, a crucial backbone of the city's economy, has remained elevated for the last eight quarters. But the first quarter of this year surpassed record levels, comparable only to the first quarter of 2001. CBRE released its Q1 2021 Industrial MarketView report this week, detailing the latest local industrial developments.

As CBRE's 2020 Southeast Industrial Outlook pointed out last year, about 50% of the U.S. population lives within a day's truck drive to Charlotte, making the city a hot destination for distribution operations.

Davidson College's Jay Hurt Hub for Innovation and Entrepreneurship.The Hurt Hub@Davidson via Instagram. Next month, Davidson College will host an Innovation Week to convene at least 200 entrepreneurs, startups and investors from across the Charlotte region for a week of networking, workshops, panels and other activities.

The U.S. Census Bureau's weekly Small Business Pulse Survey offers an inside look at how small businesses across the country are faring in the COVID-19 pandemic. The Charlotte-Concord-Gastonia metropolitan statistical area (MSA) is one of 50 regions included in the survey, which gathers responses from about 885,000 non-farm, single-location businesses with fewer than 500 employees and at least $1,000 in receipts.

Inside the $6B Acquisition of Charlotte-HQ’d Extended Stay America

Afrofuturism Fest to Debut in Charlotte Next Month

Charlotte's top private schools say they're seeing a boost in enrollment ahead of the upcoming school year, following a steady growth trend over the past several years. NewsBreak reached out to the city's largest private schools, as ranked by enrollment on Niche.com, about their preliminary enrollment figures for the 2021-22 school year. We asked whether they saw a rise or drop in the number of new applications coming in compared to previous years, how many current students/families committed for the next school year, how many new students were added, and whether they're seeing families leaving in favor of public schools.

The Charlotte Area Transit System (CATS) announced it selected three paintings by local artists to be printed on its next lineup of transit passes. Launching in 2022, the monthly bus and light rail passes will be adorned with colorful artwork inspired by the Queen City's downtown streetscapes.