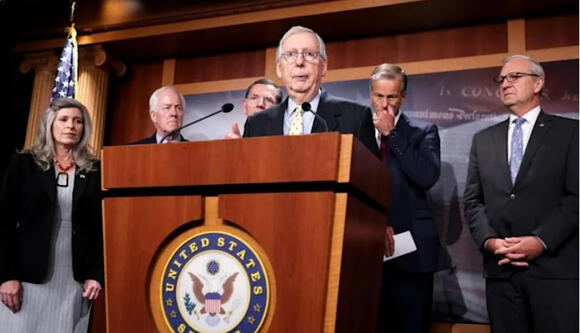 Mitch McConnell, the minority leader in the Senate, pushed Democrats to take responsibility for their "socialist shopping list" and finance it without Republican support. In his view, either the GOP will refuse to finance the next huge Democratic spending, or it will vote to raise the debt ceiling, therefore contributing to the load placed on future generations.

Chuck Schumer, the majority leader in the Senate, unveiled a $3.5 trillion budget resolution on Monday, which included measures for health care, child care, climate change, immigration, and other Democratic objectives.

His observation was that "tragic and comedic aspects of the same coin." It's tragic, McConnell added, that middle-class people would be harmed by the Democrats' spending spree. Democrats pretend to be nonpartisan, but in fact "they won't allow Republicans have any input in this monstrosity," which is hilarious. . . As the GOP leader said, "They want our help in increasing their credit card in order to make this happen."

Sanders and the socialist "squad," McConnell said, are trying to "tax and spend this country into oblivion" by "handing the keys" to them.

As of right now, Republicans are on course to hand Biden a huge legislative win with the roughly $1 trillion infrastructure plan that would clear the way for a social agenda that will cost almost three times as much. As one of the 19 Republicans who voted to advance the old measure, McConnell cast his vote in favor.

McConnell cited the unemployment insurance expansions that exacerbated labor shortages, the amnesty drive during a southern border crisis, and the Green New Deal's impact to businesses that are still battling to recover from the recession as examples of the damage Democrats' policies will cause.

"It's our Democrat colleagues who don't care about what's historically typical. "Their borrowing and spending are out of the ordinary historically," he continued.

McConnell acknowledged that the GOP will not vote to increase the debt ceiling, but added that the Democrats may still use the back-door reconciliation process to push through a radical bill without Republican support.

“Democrats already have all of the tools they need to increase the debt ceiling in a bipartisan manner. They can find 50 Democratic votes to finance it if they want 50 Democratic votes in lockstep to spend trillions of dollars more. He stated, "They don't need our support if they don't want Republican opinion."

“Shouldn't Democrats be proud of their debt? Our colleagues appear to believe that Chairman Sanders' idea is valuable enough to burden our children and grandchildren with a hefty cost. McConnell said, "They deserve complete control over that choice."

The City of Lincoln Council says the app can be used by anybody who feels vulnerable.PEXEL. A new smartphone application is being created that would enable women to request that CCTV operators in a city watch them as they go back to their homes.

5 amazing things to do in Watertown, SD

The travel industry is becoming too crowded. The "secrets" of the locals are constantly leaked for the next big story, and large cities lose their allure as they become regular, apparent locations. When everyone else has gone there, why would you want to go there as well?

Some leading Democratic lawmakers are accusing Amazon of profiting off the spread of COVID-19 and vaccine misinformation.NPR. Amazon is under criticism from lawmakers because of its algorithms, which push the livestock dewormer ivermectin, COVID-19 remedies, and anti-vaccination material, which includes medical disinformation.

A new study suggests there are significant mental health benefits to getting vaccinatedGETTY IMAGES. If you come into touch with the coronavirus, you will not get severely ill or die as a result of receiving the vaccine. This is an apparent and major health advantage of getting the vaccination.

TOKYO — The Japanese capital is undergoing a resurgence. Because contamination was discovered in unused Moderna vaccine vials on Thursday, the country suspended the use of approximately 1.63 million doses of the vaccine, raising concerns about a potential supply shortage as the country attempts to accelerate vaccinations in the face of a COVID-19 outbreak.

The dates on which the Moderna and Johnson & Johnson vaccines will get FDA clearance remain unknown.

Pfizer-BioNTech coronavirus vaccine is now approved for use in persons 16 and older. The focus is moving to vaccines manufactured by Johnson & Johnson and Moderna. In the United States, both vaccinations have been approved for emergency use by the Food and Drug Administration for months. Pfizer was the only company to submit a comprehensive application for full approval, followed by Moderna and Johnson & Johnson as of June.

The Advantages of Getting Up Early Every Morning

It makes you healthy, wealthy, and smart early to bed, and early to wake. This statement is one of the most significant lessons of our lives in primary school. Research shows that adequate sleep and early awakening help the body and mind to relax and rest. It is also vital to keep the body healthy overall. We present several advantages of early rising.

Dust plume from Africa heading to Florida. For hurricane season, here's what it means

The plume could arrive in the Sunshine State by Monday. Saharan dust forecast for Wednesday. The dust could arrive starting Monday and become more prolific for Florida by the middle of the week.Click Orlando.

A sample specimen of a dead Asian giant hornet, also known as a "murder hornet," from July 2020 in Bellingham, Wash.NPR. Washington state has observed the first live Asian big "murder hornet" of 2021, which was caught in the act of assaulting a wasp nest.

(NEXSTAR) – A leading British immunologist told U.K. lawmakers Tuesday that the idea of reaching herd immunity in a world with the delta variant of COVID-19 was “mythical.”

Increase in food stamp benefits by the Biden administration

Starting Oct. 1, the average monthly SNAP payments will be around 27 percent more than they were before the epidemic. The Biden administration intends to announce a substantial permanent boost to the food stamp payments that help 42 million Americans buy groceries on Monday — a record increase for one of the country's greatest safety net programs.

To protect themselves against COVID-19, Dr. Anthony Fauci noted that it's likely that the elderly and those with weakened immune systems would need booster doses. A third dosage may be needed, according to White House senior medical adviser Dr. Robert Gibbs.

The Coast Guard reports six deaths when a floatplane crashes in southeast Alaska.

The U.S. Coast Guard reported all six people aboard a sightseeing plane died in the crash in southeast Alaska. Rescuers from Coast Guard Air Station Sitka used an MH-60 Jayhawk helicopter to find the wreckage at 2:37 pm, but found no survivors, the Coast Guard stated in a statement.

The CDC warns that people who have been vaccinated but have had a breakthrough infection can spread the delta variant.

The Centers for Disease Control and Prevention was criticized for not providing statistics when it revised its mask recommendation this week to advise even vaccinated individuals to wear masks inside parts of the country.

Over COVID concerns, the USA renews its policy of allowing the removal of illegal immigrants.

People who are fully vaccinated account for almost 25% of instances in Los Angeles.

COVID-19 infections are occurring at a rate of one out of every four in Los Angeles, according to health experts. Fox11 stated that Los Angeles Public Health Director Barbara Ferrer noted that around 26 percent of the cases diagnosed between July 1 and July 16 were persons who had been vaccinated against the virus.

Biden team considers a return to mask mandates in some states

As part of conversations on how the government might do more to stem the spread of the Delta strain, top Biden administration officials are evaluating whether to propose that states and localities with poor vaccination rates reimpose mask regulations, particularly indoors.

Masks are no longer required for students in nine of the 20 major school districts in the US.

The new school year is fast approaching. Nine of the 20 largest school districts in the United States have made masks optional, while nine others have made them mandatory. A few weeks remain until schools are scheduled to begin, and two districts are still uncertain.