Two weeks ago, a building in Florida collapsed, located around the Miami Beach area. The condo collapsed during the early hours of June 24th. The tragedy was unexpected and unlike anything the first people at the scene wanted to find. 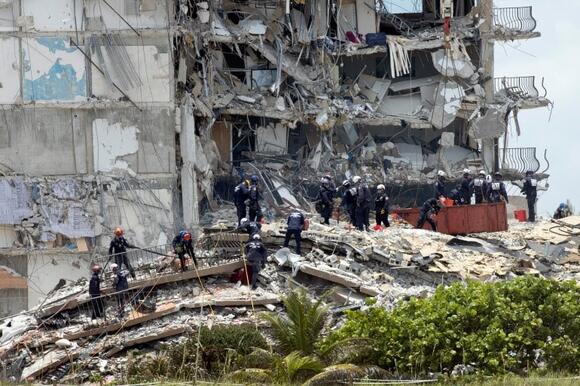 The operations at the collapsed building quickly shifted from a search and rescue effort to a recovery operation, which signaled the end of the search for survivors. This was announced by officials on Wednesday 7th, July 2021.

With almost 100, precisely 86 people still unaccounted for, the rescue crews have still not found anyone alive, shortly after half of Champlain Towers South, Florida was reduced to a pile of rubble under one minute in the early hours of June 24th.

For the better part of two weeks, officials termed the grueling, almost non-stop digging a search and rescue mission.

“There have been 54 people confirmed dead now in the partial collapse of the building,” the Mayor of Miami-Dade, Danielle Levine Cava stated on Wednesday. The recovery of 18 bodies on Wednesday was the largest single-day increase in the death toll yet.

Among the fifty-four four dead, thirty-three have been identified and their families have been notified about their death, the mayor stated.

The transition from rescue to recovery took place at midnight on Wednesday, the Mayor announced it at a news conference on Wednesday, describing the decision that had to be made as “extremely difficult”.

She asked that the entire country join her in praying for those who were lost and for the families in mourning.

Levine Cava also praised the rescue team of volunteers who trooped in from all over the world, naming them “men and women whose lives are dedicated to one purpose: saving lives”

The POTUS Joe Biden who made a visit to the area last week, offered his “continued support,” the Mayor stated.

The weather briefly disturbed the efforts of the rescue officers, while Tropical Storm Elsa made a landfall on Florida’s opposite Coast, the area was still feeling the effect of the storm coupled with strong winds and rain.

A video was released on Tuesday by the Miami-Dade County fire Rescue Department allowing the public visual access to people working on the pile as tarps and tents waved in the wind and the palm trees swayed from side to side.

The Fire Chief Alan Cominsky said the decision to call off the rescue effort was not an easy one to make, as they still had high hopes in finding survivors but their expertise indicated that it was no longer possible.

He also said the search crews had tried everything humanly possible to find life under the rubble of the collapsed building. “Our crew under terrible weather conditions, rain and even possibility of imminent danger of a secondary collapse,” he stated.

The fire and rescue crews reported that they removed 124 tons of debris from the building while responding to reporters, the Fire Chief said none of the people recovered survived the collapse of the building as far as the remains indicated.

The clean up teams are still sorting out the debris stored in warehouses to serve as potential evidence in the ongoing investigation to find out why the collapse happened.

The documents that were released by the officials revealed that there had been previous concerns about the structural integrity of the Champlain Towers South. The findings that were eventually made by an engineering consultant, Frank Morabito showed that there had been abundant cracking and crumbling in the underground parking garage of the same building according to a report made in 2018.

There are still efforts going on to find the bodies of the victims left in the building so as to get their bodies back to their families so they can mourn properly.