Meet Luis Samudio, a police officer who used to be a flight attendant 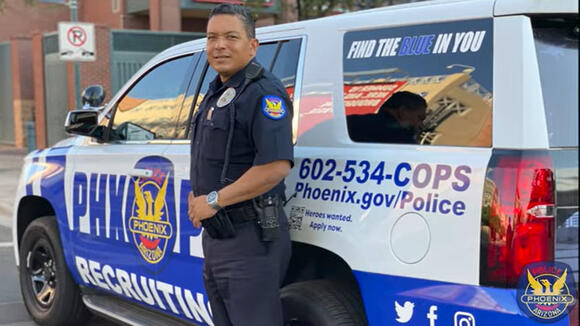 PHOENIX, AZ — Officer Luis Samudio is a member of the recruitment division of the Phoenix Police Department's Employment Services Bureau. This division is dedicated to recruiting top prospects for Phoenix Police's future.

"We want to recruit the ideal candidate," Officer Samudio said. "[A] qualified applicant that's going to represent the agency really well, along with the City of Phoenix, and then our leaders. It is a noble position. It's gotta be​ coming from the heart, from the mind, to want to do this type of career."

Officer Samudio's daily task includes calls and emails with potential candidates, and then plenty of community outreach such as gyms, hiking trails, job fair, and schools. Fortunately for Luis, this kind of work, particularly the ability to talk to people, is something he had done in his previous job.

"I was a flight attendant for America West Airlines," Officer Samudio explained.

Before serving the City of Phoenix, Officer Samudio was serving passengers on planes. For approximately five years he worked as both a recruiter for America West and a flight attendant. additionally, to the benefits of traveling from one place to the other, he said he learned some precious experiences.

"I think that's probably the area where I started recognizing, or knowing, the importance of customer service in dealing with people," he said. "The good and the bad."

He also started a family around this time. He chose to look for jobs closer to home at that point. Officer Samudio explained that he is who he is today as a result of where he came from and what he has done prior to receiving his badge.

"What that taught me is how to be patient, sympathetic, empathetic to the people, and providing the service that I can as representing that agency or that company at the time," Officer Samudio said of his flight attendant career. "And that certainly has carried on to where I am at today."

He further stated that the responsibility he now holds in helping find the next wave of people to wear this badge is something he doesn't take lightly.

"Career experiences that others have had, or education, family backgrounds, is certainly important and critical in how we're going to deliver service to the community," he explained. "The fact that I have such a vast background, and bringing it to maybe work here, I think I'm a lot more sensitive to understanding where we're at today."