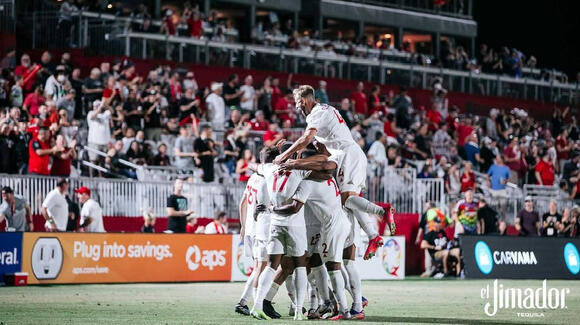 PHOENIX, AZ — Phoenix Rising FC is victorious over Tacoma Defiance on Saturday, June 12, 2021 at Wild Horse Pass. This made the Phoenix raised to 5-1-1 this season. Here is the resume of the match.

The Rising's goalkeeper Ben Lundt had eight saves in total and Solomon Asante scored two goals. Tate Schmitt, a Phoenix-native player, then added the third goal for Phoenix. Schmitt will return to Wild Horse Pass on July 3 to face the second-place LA Galaxy II that will end with fireworks in honor of Independence Day.

Just in the second minute, the Phoenix, pressed with Jon Bakero, brought the ball back from the back post. When Bakero passed the ball to Asante and fired a shot with Asante's first-touch, Tacoma's goalkeeper Spencer Richey successfully halt the ball and got the ball down to his left side, became the first save of the match.

In the 13th minute, Tacoma attacked back when a defensive error from Rising gave Tacoma's Samuel Adeniran a chance to score a goal. Adeniran then attempted to kick the ball out the far side netting, but Phoenix's Ben Lundt prevent the ball by a full-extension save to his right side. Lundt then made his second from Adeniran in the 16th minute, and two minutes later he took the ball from Tacoma's striker after Tacoma's Jimmy Medranda lobbed a perfect cross the back post at Adeniran.

Asante scored his first goal right before halftime when he took a pass from Joey Calistri in midfield and brought the ball to his right. A kick was shot by this two-time defending league MVP, across his body and the line-drive attempt broke through Richey's save attempt and deflected into the back of the net.

The second goal by Asante was two minutes after his first score when Santi Moar and Arturo Rodriguez coordinated on the left flank. Rodriguez then gave the ball to the holding midfielder Jeremy Kelly and pulled apart Tacoma's backline by his late run. Kelly then snuck a short pass to Asante on the right and fired a hard shot towards the goal. The ball finally found its way to Tacoma's goal after deflected by a Tacoma defender and made it 2-0 for Phoenix.

The last goal was by Rising's newest player, Tate Schmitt, 17 minutes after coming on for Joseph Calistri. This debut goal was set up by Santi Moar after bringing down a cross at the back post and passed the ball, right through two Tacoma defenders.