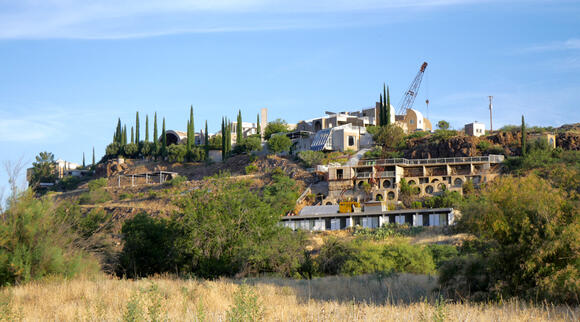 PARADISE VALLEY, AZ — Architect Paolo Soleri studied under Frank Lloyd Wright in the United States in 1947. Due to his death in 2013, few finished examples of his work remained in existence due to its complexity. Two of them are located in Paradise Valley which is Cosanti and Arcosanti.

Soleri received his first commission to design and build Dome House in 1952. Soon after he learned how to make ceramics while working on the Ceramica Artistica Solimene, which was built on Italy's Amalfi coast.

After that, Soleri and his wife settled near Phoenix in 1955. Their new studio, which became known as Cosanti, was situated on a five-acre site north of the city. Cosanti is a combination of the words Cosa and Anti-consumerism.

In 1956, he built structures out of dirt using an old technique known as earth-casting. This method involved creating a concrete shell over a mound of dirt. The walls and roof were then built using hand tools.

At Cosanti, they experimented with building structures that can be turned on and off according to the Sun's position in the sky. The goal was to create systems that are both energy-efficient and functional.

Arcosanti is a conceptual site that shows how cities could look in the future based on the theory of arcology, developed by Paolo Soleri.

The term "arcology" refers to Soleri's approach to urban planning, which is focused on bringing people closer to nature through carefully designed architecture. The concept of the Arcosanti project was to create structures that are both minimalist and multi-use.

At the time of Soleri’s death, Arcosanti was only 20 percent complete due to its complexity. Located in the heart of Sedona and Phoenix, it has been inhabited and built by 8,000+ volunteers for over 50 years.

Arcosanti has attracted urban planners, architects, and academics who admire its origin story and discover that people can make a difference through will and a willingness to try and create a frugal but enriched alternative way of life.

Today, Cosanti and Arcosanti are open for public visits and provides a variety of activities within the site. For more information, visit here.