I find joy in delivering well-researched and compelling articles. I am a lifelong learner, teacher by profession, and writer by calling.

The Earl Who Never Learned His Lesson 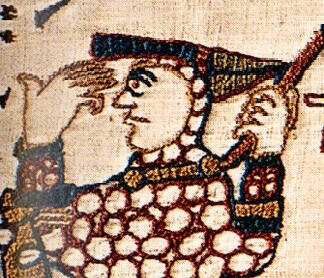 Panel from the Bayeux TapestryWikimedia Commons

On October 14, 1066, William the Conqueror’s Norman forces won the bloody Battle of Hastings over King Harold II’s army, killing the King in the process. King Harold II was fresh off a victory over another challenger to the throne, Harald Hardrada of Norway, but William proved too strong.

During the Battle of Hastings, William, who would soon after be crowned King William I, famously rode his horse through the ranks of his troops, exposing his face to defy rumors that he had been slain. His tactic worked, and morale rose, leading his forces to victory.

William the Conqueror earned his nickname for his heroics at the Battle of Hastings, and over the next decade would cement his Kingship over many revolts and potential challengers. King William was an inclusive leader. He installed many Normans as earls and nobles but allowed Englishmen to keep their land and hold power as long as they stayed loyal.

The power struggle for control of England was tumultuous in the 11th century, and our protagonist Earl Waltheof could not keep himself out of trouble. In the end, just like on the battlefield of Hastings, King William showed Waltheof who he was.

Waltheof was a fascinating character. According to an entry in the 1911 Encyclopedia Britannica, Waltheof was devout and charitable, likely educated for monastic life. Of course, events would change his path, but his background helps explain his future decision-making.

As the second son of his father, Earl Siward of Northumbria, Waltheof never expected to inherit his father’s land and title. However, his older brother died in battle in 1054, and his father died the following year, so his lot in life changed quickly. When his father died, Waltheof was only a teenager and too young to become the Earl of Northumbria, but his time would come, and he ultimately became an Earl in 1065.

As William the Conqueror came to power, Earls, who controlled small land areas within England, had to decide how to approach the new King. Earl Waltheof, a man now in his mid-twenties, chose to submit to William as an act of good faith.

However, Woltheof did not stay submissive for long. In 1069, when the Danes invaded England, he decided to go back on his loyalty to King William I and support them. Unfortunately, they proved a lousy bet. When winter came, they traveled home, and when they returned the following spring, William was ready and paid them to leave England be.

Waltheof, for a second time, submitted to William, and William, balancing ruling Normandy and England, decided to let Waltheof off the hook. It was a political move for King William to stabilize the power structure in England.

King William also doubled down on his forgiveness for Waltheof. He married off his niece Judith to him. But, perhaps for William, it was not forgiveness but the embodiment of the old saying, “Keep your friends close, and your enemies closer.

The Revolt of the Earls

Waltheof eventually followed in his father’s footsteps and became the Earl of Northumbria. He was powerful, married to a relative of the King, and seemingly had submitted his way into the King’s favor. If you think Earl Waltheof was the last person in all of England to want to participate in another revolt, you would be wrong.

In 1075, Earl Waltheof, now a man in his mid-thirties, organized another revolt with Normans. At an illegal wedding, two other Earls recruited Waltheof to join them. He agreed and thought he could use his connections with the Danes to help gain victory.

With King William I back in Normandy, the plan kicked off. But Earl Waltheof had a change of heart and confessed the plot to the Archbishop of Canterbury Lanfranc. Lanfranc, the acting regent, was able to slow the revolt with the information Waltheof provided, giving King William time to return to England.

The revolt was unsuccessful, and Waltheof fled to mainland Europe, fearing King William’s wrath. King William offered to forgive Waltheof for his betrayal yet again, and the devout and charitable Waltheof returned. But, King William had no intention of ignoring Waltheof’s disloyalty and threw him in jail.

Waltheof was sentenced to death, and according to an entry in the 1911 Encyclopedia Britannica, on May 31, 1076, he was beheaded on St Giles’s Hill, near Winchester. Waltheof was the last English aristocrat to be killed by King William.

Waltheof was disloyal and weak-minded, and it cost him in the end. King William gave him multiple chances, but he never learned his lesson. He seemed to think he could always ask for forgiveness and everything would be fine, but he revolted one too many times.

I bet as King William was coaxing Waltheof back to England after his last revolt, he was thinking, “Fool me once shame on you, fool me twice shame on me.”

I find joy in delivering well-researched and compelling articles. I am a lifelong learner, teacher by profession, and writer by calling.

The Alien Franchise and Feminism

How the U.S. Stole Half of Mexico’s Land

President Polk broke the promise of the Monroe Doctrine for gold and manifest destiny. Before the 1848 Treaty of Guadalupe Hidalgo, Mexico’s landmass stretched well past its current northern border into what today is the American Southwest. Then, Mexico’s land included present-day California, Nevada, Utah, Arizona, New Mexico, Texas, and parts of Wyoming, Colorado, Nebraska, and Oklahoma.

The Woman Who Was King

To this day, I love the characters I first met through a Game Boy screen. I was born two years after the 1989 release of the original Nintendo Game Boy, but the 8-bit handheld game console and its ancestors turned me into the gamer I am today. The Game Boy (1989) and the Game Boy Pocket (released in 1996, which was smaller and lighter, but merely a redesign of the same console), spark nostalgic memories from my childhood. Long before a smartphone became my handheld gaming device of choice, my Game Boy allowed me to play anywhere.

The Deadliest Wildfire in U.S. History

The Peshtigo fire happened on the same day as the Great Chicago Fire but was far more deadly. There was less economic damage, but four times as many people died in the Peshtigo blaze.

How to Improve Student Mental Health by Keeping Stress Positive

Over 10% of U.S. children ages 3 to 17 are diagnosed with anxiety or depression. Those numbers are alarming and they may be getting worse during the global pandemic. But there are simple ways to mitigate mental health risks for children that can be done at home.

What “Griefing” Is and How It’s Done in DotA 2

Griefing your team in a video game is the equivalent of a two-year-old having a tantrum because they didn't get the ice cream flavor they wanted. The definition of a griefer is an online game player who intentionally spoils the game for other players.

Nothing has unified America more in 2021 than the feeling of outrage related to the story of GameStop's meteoric stock rise on the backs of Reddit investors, only to be stopped by Robinhood, the company named after the fabled hero that steals from the rich and gives to the poor.

When Death Alone Does Not 'Cut' It

Before English speakers adopted the phrase “death by a thousand cuts” as an idiom to mean any failure resulting from many small problems, it was one translation of the Chinese execution method Lingchi chusi. It was a ruthless execution method.

The Great Gorilla Garantua and His Namesake

According to Merriam-Webster, the word gargantuan means tremendous in size, volume, or degree. The word’s closest synonyms are gigantic and colossal, but more fascinating are the two gargantuan figures that went by the name Gargantua.

How Thanksgiving Got Its Day

Thanksgiving Day in America was not always predictable. It was one of the four original American holidays, but it did not have a finalized date until 1942. Thanksgiving 1918 by Underwood & Underwood. (War Dept.)Wikimedia Commons.

The Story of the Argentine Window Vampire

In the 1950s, Florencio Roque Fernández stalked and killed women in their homes. (Dracula (1931) Spanish-language film poster/Wikipedia Commons) In 1897, the Irish author Bram Stoker introduced the world to the vampire with his gothic horror novel Dracula. The story of Florencio Roque Fernández, who stalked the nights of Monteros, Argentina, in the 1950s, begs the question: Are vampires real?

The Man Behind the First Successful Open-Heart Surgery

Daniel Hale Williams was a Black physician in Chicago who overcame segregation. Frederick Douglass once said to Dr. Williams:. “You say you see what ought to be done. Well, hoping will do no good now or any time.There is only one way you can succeed and that is to override the obstacles in your way by the power that is within you.Do what you hope to do.”

How America Got Today's Uncle Sam

Uncle Sam is the most iconic personification of the United States. He evolved over the course of 100 years until his final form was established in 1916 during World War I. Since then, he has experienced lasting popularity as a staple of American culture.

The American Author Who Killed His Wife

In Mexico, on September 6, 1951, William Seward Burroughs II shot his wife Joan Vollmer in the head. They had been playing a game of William Tell. His wife’s death inspired Burroughs to become a writer.

Phone Booths exited popular culture with they became obsolete, but not before they were responsible for some fantastic movie moments. Destroying a phone booth may not be a useful skill in this day and age, but some memorable movie scenes reveal the top five ways. Here is the count down.

The Rapper that Murdered and Ate his Roommate

Antron “Big Lurch” Singleton was sentenced to life in prison without the possibility of parole. “I don’t believe in justice no more. Just us and God.”— Singleton in Rhyme and Punishment (2011)

The prophetess Deborah spoke to God, and Jael used a hammer to deliver justice. Together they saved Israel over 3000 years ago as recorded in the Book of Judges, a book in the Old Testament (Hebrew Bible).

The Thrilling Battle of Buffalo Wallow