I write about startup culture, productivity, and life's moments. My goal is to serve as a teacher for the next generation of content creators.

3 Simple Ways to Motivate Yourself to Write Everyday 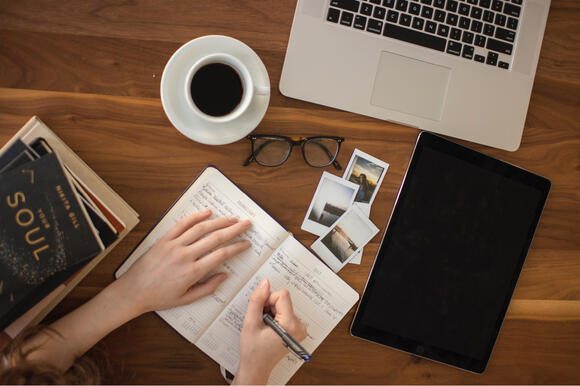 Photo by Thought Catalog on Unsplash

Writing is easy, but writing everyday is hard

Do you remember the story about the mice that got trapped in a cream jar? Two mice fall into a jar, and both of them frantically try to escape. One of the mice gives up after some time, and it drowns. The other mouse keeps attempting to climb out. Eventually, the mouse churns the milk into butter, and it doesn’t drown.

It’s a children’s story, and it preaches the importance of never giving up. Really though, it’s kind of a harrowing tale. These mice somehow find themselves in a jar of cream, and even after one of the mice drowns in a pool of lactose, the other one continues without a second thought.

So where am I going with this? To me, this story is about motivation. Even though the mouse didn’t know it would happen, he was able to churn the cream into butter, and get out of the jar. His motivation was his life. If he stopped moving his little legs, then he would’ve surely died like his little mouse friend.

As writers, we aren’t motivated by our impending deaths. Well, most of us aren’t. Unless your Albert Camus or Edgar Allen Poe, your motivations lie elsewhere.

Unfortunately, motivation isn’t always easy to come by. We can write for hours on end some days. We can churn out 2–3 blog posts in a single sitting. On other days, however, we’d almost rather drown in cream than type a single letter.

When the writer blues get the best of you, there are three simple ways to motivate yourself to sit down and do some writing.

A little competition ever hurt anyone. It certainly won’t hurt you if you compete against yourself. It’s fun to game-ify your life. The goal is to constantly be a better version of yourself.

For example, this week, I’m trying to post more stories than I ever have in 7-day time frame. It’s near the end of the week, and I’ve accomplished my goal. It wasn’t easy, but the self-competition forced me to leave my comfort zone.

Don’t compare yourself to the writers who post two stories a day. That’s just how they roll. They did not used to be that efficient. Trust me. It took them years to get to where they are at, and I bet they aren’t done perfecting the process.

Don’t compete with others and you’ll get to define your own version success. Besides, what happens if you do “beat” someone else. You may fall subject to success syndrome. You’ll take it easy from here on out. You will stop producing your best content.

Compete with yourself, and you will grow.

Sometimes you just don’t want to sit down and bust out a blog. What if you typed for 20 minutes and then rewarded yourself with a snack?

The incentive is a common tactic to get children to do their homework, help with yard work, or clean the house. We’re not above it either. Sometimes we just need an extra push, and sometimes a little popcorn is all it takes.

You don’t have to incentivize yourself with a snack either. Just think about what you like to do. If you like shopping for clothes online, then allow yourself to do that after a writing session. Want to watch TV all day? Complete a writing session, and then watch an episode of your show.

The options are limitless. You know what you like to do. Treat yourself, but at least be a little bit productive.

We can’t always rely on ourselves, or the incentives we place in front of us, to do the writing. Sometimes we need to look at the bigger picture. Ask yourself, “Why do I write?”

What’s your answer? For me, the reason I write is because I want to build my newsletter. There are other reasons why, but the newsletter is my number one goal. I want 10,000 email subscribers one day. I won’t get any closer to my goal if I don’t write blog posts and get people’s attention.

When I think about my end goal, I can’t help but put a smile on my face. It’s a crazy idea, but it’s an idea that might just work. I keep that smile on while I write. It lifts my mood. I’m doing what I like to do, and I can see the light at the end of tunnel.

Writing is easy. Writing day after day is hard. You need to be a little crazy to do it.

Write a little bit everyday, and after just a month, you’ll see how far you’ve come. It isn’t easy to write everyday though. It’s hard to see the bigger picture. We fail from time to time, so writing can often seem like a waste of time.

Stay true to yourself. You know yourself better than anyone, because you are your own biggest critic. Keep chasing your rival. Your rival is you, and you will both push each other to new limits.

I write about startup culture, productivity, and life's moments. My goal is to serve as a teacher for the next generation of content creators.

My Life Began When I Was Rejected

Shift your perspective to a win-win outlook on life. Until now, only a handful of people know I applied to UCLA during my sophomore year of college. I was having a quarter-life crisis of sorts.

How to Freelance Without Going Broke in the Process

Advice from a 26-year-old who has diversified streams of income. One of my best friends is a tattoo artist. He’s 25 years old, owns his own business, and has an apprentice under him. He’s been at it for years and has done hundreds of tattoos for various clients.

How To Make Healthy French Toast

One of my pandemic hobbies was counting calories. I don’t recommend doing it for an extended period, though. It’s a great way to learn just how many calories you eat throughout a given day, but it’s impossible to get a completely accurate reading.

Be the creator you want to be. Photo by Roman Shillin on Unsplash. Multifaceted people are opportunists. They don’t push for more gigs; they’re naturally pulled toward them. That’s because they’ve shifted their mindsets to think less about being perfect and more about being helpful in as many ways as possible.

Join a community of like-minded creators before you jump ship. Years ago, I helped create a machine that churned out ideas on the fly. The machine was a startup, and we sold bottles of matcha green tea. I believed in the product because it was a healthy but tasty alternative to the usual cup of coffee.

6 Ways You Enter the Flow State Without Realizing

These will make you change what you think about deep work. The flow state is life-changing. You know what they say: once you go flow, then nothing after that feels slow. Okay, no one says that. Not even me, but that’s beside the point.

Live like there’s no tomorrow.Photo by Dylan Posso on Unsplash. I want to make this type of content for the rest of my life. Have you ever had dinner with somebody you don’t know?

Pay Attention to Those Who Work in Silence

Everything you hear and read is an opportunity to learn something new that you can use later. “I’m not posting on Instagram until I actually have something to share. Until then, I grind in silence.”

3 Ways to Sustain Your Pandemic Hobbies in The “Normal” World

Girl holds camera in front of faceDanilo Alvesd/Unsplash. Keep baking sourdough bread; just make less of it. Returning to “normal” actually sucks. Don’t get me wrong. I’m happy more and more people are getting vaccinated. The overall population is safer as a result, and that’s what matters most. But working from home was just so convenient.

I haven’t told anyone, but I think it’s time I admit it. It’s something that bothers me day after day, and I need you to know about it. Call me crazy, but I think it’s easier to write seven minute articles than three minute ones. There are a few reasons why I think so:

The Case for Living With Your Parents After College

A couple long years in your hometown will set you up for the future. ireworks exploded in my mind as I walked the gym floor I’d first seen four years ago. I climbed the stairs, almost tripped on my robe, and made the exchange.

A Second Grader Found the Key to Happiness

Generous acts of kindness in any capacity lead to contentment. According to a Covid Response Tracking Survey, only 14% of American adults say they’re very happy. Now, 50% say they have felt isolated at least once in recent weeks.

Adopt these three words and your mindset will change dramatically. Do you ever have one of those days? I’m talking about the type of day where everything seems to upset you. Well, I had one of those days last week. I didn’t sleep well and I had to go to work instead of write. I don’t have much to complain about, but that day, every single minor inconvenience seemed to bend me the wrong way.

You Don’t Need the Best Equipment to Create Great Content

Coming from a guy who typed this story on a $150 Chromebook. I decided to conduct an experiment. I wrote an article with a powerful, 27-inch iMac, and I wrote one with a $150, borrowed Chromebook.

The answer: to achieve a goal that only you can accomplish. I make the same breakfast everyday. It sounds crazy, but it’s true. I actually go to bed excited to eat the next morning. Knowing that I get to indulge in an egg white scramble and my signature protein bagel, with PB Fit and banana, helps me sleep at night.

The Most Overlooked Qualities of Good Writers

Have confidence in yourself and you’ll open doors that were previously locked. You wake up to the sound of birds outside your window. It’s a mellow, warm morning. You feel the weight of the yellow sun on you in bed. It’s time to get up and have a productive day. You want to write a few blog posts to get ahead for the week.

Stop Killing Yourself With Cold Calls

Don’t tell potential clients what you can do. Show them. It’s 8 p.m. and you’re busy watching your new favorite crime show on Netflix. You’re winding down from a long 9–5 day, you’re snuggling your cat, and you have a bowl of Skinny Pop popcorn by your side.

How to Write Like Your Hair is on Fire

One of my best friends is on the frontlines in Oregon. He’s fighting the fires that are ravaging the west coast. He’s been gone for the past few months, and he needs all the thanks in the world for his services.

Reach peak performance by putting yourself in the right state of mind. Every once and while I log onto Medium and see a post about the “flow state.” What is it, and why is it so important for writers? It seems like the secret sauce that all successful writers dab onto their blog posts.