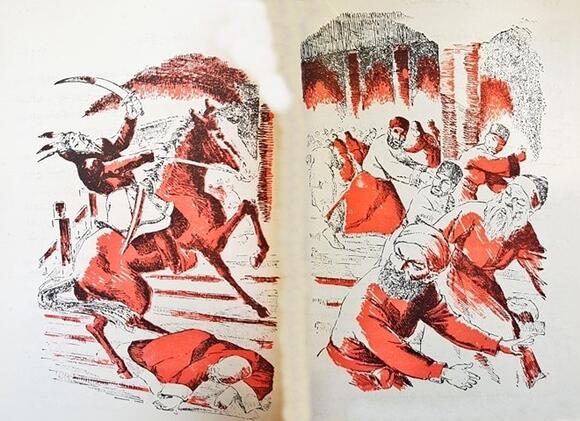 “I have heard of such a quantity of slain that I did not believe the report and so have not recorded it,” — Historian Juvaini on the Sack of Urgench.

There were many terrible massacres throughout history. According to Brandon Christenson at Real Clear History, some of the worst occurred during China’s Qing Dynasty.

But one massacre had no parallels. Persian historian, Juvaini, documented the Sack of Urgench by the Mongols, where the Mongols invaded the Khwarazmian Empire and utterly decimated the city. In Urgench, Juvaini says the Mongols enslaved all women and children, while each Mongol soldier was ordered to kill 24 men in the city. With 50,000 soldiers, this would have meant the Mongols killed 1.2 million citizens.

No one is sure whether Juvaini exaggerated the account of the events of Urgench, but here are the details that are officially known:

According to Dr. Kaveh Farrokh and Dr. Manouchehr Mostagh Korasani in Medieval Warfare, the Mongol Empire was rapidly expanding prior to the invasion of the Khwarazmian Empire. Genghis Khan had successfully united several steppe tribes in Mongolia and had conquered northern China by 1206, leading to the advancement of siege technology for the Mongols.

Initially, Genghis Khan did not even want to get involved in invading the Khwarazmian Empire, only seeking to trade with the empire. He was already occupied fighting the Jin Dynasty of China. One Persian historian said Genghis Khan once sent the Shah of the Khwarazmian Empire the following message: “I am Khan of the lands of the rising sun while you are sultan of those of the setting sun: Let us conclude a firm agreement of friendship and peace.”

At the time, Farrokh and Korasani note the Khwarazamian Empire included present-day Iran and parts of Central Asia. One governor at Otrar, a city in the Khwarazmian Empire, decided to kill 500 members of a Mongol trading caravan, thinking they were spies for the Mongols. Genghis Khan attempted to send an olive branch of reconciliation, sending three diplomats to the Shah of Otrar, Inalchuq. However, Inalchuq killed these three diplomats in a humiliating manner: he beheaded one Muslim diplomat and shaved two Mongol diplomats.

This was particularly insulting given the almost sacred status of diplomats, and it led to a subsequent invasion by Genghis Khan’s 600,000 to 700,000 soldiers of the Khwarazmian Empire. The Khwarazmian Empire gave every provocation for the Mongols, who were fighting a war in China, to invade the Muslim world. Genghis Khan originally felt like he had no choice after the insult.

The invasion of the Khwarazmian Empire

The overall invasion of Khwarazmia lasted from 1219 to 1221, making the 1221 Siege of Urgench be one of the later battles of the war. According to Kim Stubbs at History Net, the Siege of Urgench was the most difficult battle for the Mongols. The city had heavy fortifications and was surrounded by marshes, making it difficult to besiege. Weaknesses of the Mongol army were urban warfare and their numbers. They would frequently have lower numbers than their opponents, and only through the discipline of their soldiers and the fearful reputation of the Mongol Empire would the Mongols be able to conquer more and maintain their territory.

As such, the Mongols had to engage in psychological warfare. Historian Jack Weatherford says the Mongols would massacre some cities and leave some survivors alive to tell the story, all to persuade other cities to surrender and not be subject to the same fate. The Mongol Empire masterfully used fear as a weapon to send a message to its opponents.

The war was almost over, and Genghis Khan tasked three of his sons, Ogedei, Chaghatai, and Jochi with capturing the city.

A rivalry between Genghis Khan’s sons

Once the Mongols could finally break into the city, Mongols struggled with warfare through the city, given their use of horses and arrows. In the middle of this invasion was a rivalry between two brothers, Jochi and Chaghatai.

To ameliorate the dispute, Genghis Khan gave the task of conquering the city to another son: Ogedei. Ogedei conquered the city and sought to use psychological warfare to send a message.

Jochi was not happy about being removed from conquering Urgench. Rumors circulated frequently about his birth, as many believed Borte, the first wife of Genghis Khan, had been raped, and Jochi was an illegitimate son. Despite these rumors, Genghis Khan always raised Jochi as his own son. As Genghis Khan’s firstborn son, he felt slighted, and never saw his father again. The invasion also severed Jochi’s relationships with his brothers.

After the Mongols breached the walls of the city, a battle in the streets was fought for months. The Jackmeister Mongol history channel states the Mongols suffered too many casualties to show mercy to Urgench, so the Mongols decided to wipe the city off the map and kill the majority of the city’s residents.

Urgench would eventually recover. Famous Muslim explorer, Ibn Battuta, said Urgench was “the largest, greatest, most beautiful and most important city of the Turks” in the 14th century.

As part of the Silk Road, the city somehow survived. Juvayni, who documented the horrific massacre, said Urgench was still “The Throne of the Sultans of the world and dwelling place of the celebrities of mankind.”

After the horrific massacre at Urgench, the Mongols moved into the province of Khorasan and swiftly conquered the Khwarazmian Empire. Although Genghis Khan initially did not want to invade the empire, the invasion would set a precedence for later invasions of Eastern Europe.

Historians also point to a succession crisis following the siege of Urgench — Genghis Khan’s four sons would feud over who would control the empire.

Although Juvayni’s account may be an exaggeration, the tone and feeling of the massacre certainly set a precedent.

Originally published on Frame of Reference on November 23, 2021.