Feeling adventurous? Consider trying one of the most difficult food challenges in Pinellas County! Be warned, however, as while many have tried to take on these food competitions, few have managed to complete them. Whether you prefer a food challenge based on maximum heat or obscene quantities, you can certainly find something nearby!

A 32-inch pizza may not sound worthy of a food challenge, but anyone who has ordered one from Madison Avenue Pizza in Dunedin can say it's much larger than it sounds. In fact, according to Owner and chef Sean Ferraro, its size was determined by the width of the pizzeria's front door.

I had to fit within the constraints of my front door so we settled on 32-inches. It's the biggest that could get out of the front door without having to tilt it.

The 32-inch pie, which costs $99, can feed up to 20 people. A lot goes into making each pie as it takes roughly 20 minutes just to prepare it for the oven. According to Ferraro, some people who order the pie can't even fit the pizza in their cars!

The "That's What She Said" 32" Pizza Challenge Rules

Winners of this food challenge not only get their meal for free, but they each receive a "That's What She Said" t-shirt, and their photo on the wall. To date, only five teams can say they've successfully completed the pizza challenge at Madison Avenue Pizza!

RELATED ARTICLE: Reboot in Dunedin is every gamer's holy grail

Think you can handle spicy food? Quaker Steak & Lube puts wing-lovers to the test with their Triple Atomic wing sauce, which reaches approximately 500,000 on the SHU heat scale! With a location conveniently located in Clearwater, there's no reason not to head down there and try this food challenge yourself!

Quaker Steak & Lube's locations throughout Southern United States have attracted a number of celebrities, some of who have tried their hand at the Eat Heat Challenge. Some famous customers around the country have included Jim Belushi and members of the Duggar family.

It may only be six wings, but they're doused in a hot sauce made from scorpion venom pepper, concentrated capsaicin, and juice from wild berries. Those who can handle the heat are awarded a t-shirt and featured on the restaurant's social media pages.

RELATED ARTICLE: Everything you want to know about AVA, the driverless shuttle in Dunedin

A pho bowl may not sound like a difficult challenge, but that all changes when it fills up a bowl large enough to hold 8lbs. of noodles. The Challenge Pho at Tasty Pho in St. Petersburg is just $35 and contains a slew of meats and vegetables. According to their menu, it contains rice noodles, rare beef, meatball, brisket, tendon, flank, and tripe topped with sliced onions, spring onions, and cilantro.

Before you attempt this pho challenge, just know that Raina Huang in the above video is a competitive eater and has successfully completed hundreds of food challenges. She may make it look easy, finishing in under 19 minutes, but that doesn't mean you will!

Winners receive a $25 gift card to Tasty Pho and receive the 8-pound pho bowl for free. 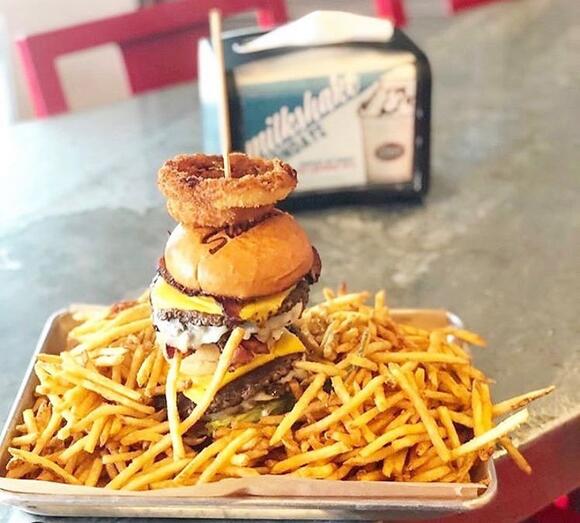 Looking for a burger challenge? Then look no further! The Stack Attack Challenge at Shula Burger in Tampa is every stomach's worst nightmare. In addition to four beef patties, the 48-ounce challenge meal also includes four slices of bacon, two slices of American cheese, two slices of Swiss cheese, lettuce, tomato, and pickles on a brioche bun. That's not all though.

The Stack Attack Challenge meal also includes two large onion rings, an enormous pile of fries, and a glazed donut for dessert. This solo food challenge has a 48-minute time limit, but many who attempt eating the meal compete to beat the best time record of four minutes and 48 seconds. 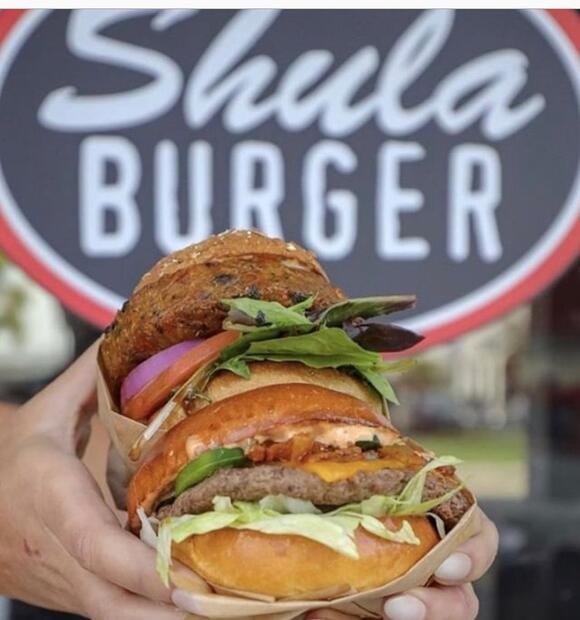 Those who complete the challenge receive their meal for free, get a free t-shirt, and are featured on Shula Burger's Wall of Fame.

If you've completed spicey food challenges in the past, you may want to try your hand at The World’s Spiciest Ice Cream Challenge. The Reaper Roll at Snobachi Handcrafted Ice Cream in Tampa has even the most practiced competitive eaters sweating profusely and running to the bathroom. (You can read about how a Tampa Bay Times reporter wound up stripping down and pacing in the shop's bathroom here!)

The Reaper Roll is made by first adding two Carolina Reaper peppers to traditionally rolled ice cream. Carolina Reaper peppers are thought to be the hottest chili peppers in existence measuring at nearly two million Scoville Heat Units. The dish is then topped with a dollop of whipped cream infused with Mad Dog 357 No. 9 Plutonium, a substance also measuring at two million Scoville Heat Units. Only a handful of people have been able to complete the challenge! 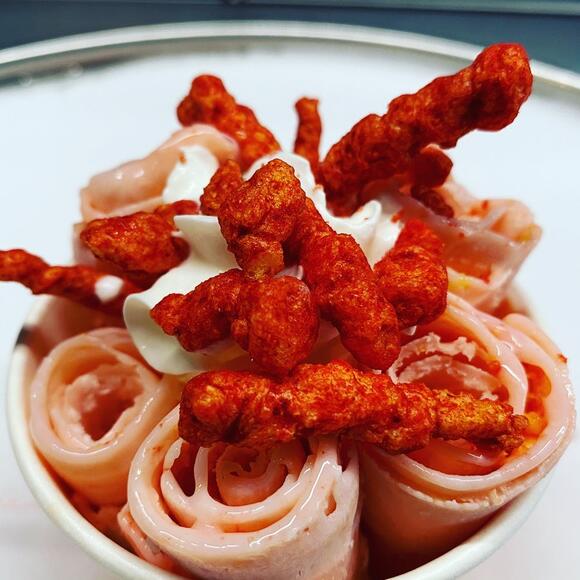 Winners get free ice cream from Snobachi once a week for a year!

Which food challenge in Pinellas County are you going to try?

Dunedin, FL – House of Mercy & Encouragement (HOME) Foundation will present Help, Hope, & Healing, a mental health conference, taking place at Our Lady of Lourdes Church on Saturday, September 17, 2022, that will provide knowledge and resources to all members of the community.

Creative Pinellas is excited to announce that they are partnering with St. Pete–Clearwater International Airport (PIE) on an exciting PIE Gate 12 Mural project located at 14700 Terminal Blvd #221, Clearwater, FL 33762. This mural project will consist of two murals over three walls at Gate 12 and the murals will feel complimentary to each other while still having their own style.

Looking for plans your kids will love this summer? Here's a list of some of the most exciting events happening in Dunedin throughout July and August! If you're hosting a kid-friendly event in Dunedin that wasn't listed, feel free to add it in the comments section!

Decision made by Dunedin quilting group leads to fundraiser earning $2,100 for Ukraine relief

The quilt that was raffled off to raise money for Ukraine| COGS Crafters Facebook. A crafting group at the Episcopal Church of the Good Shepherd in Dunedin raised $2,100 for the Episcopal Relief & Development’s Ukraine Crisis Response Fund. Even though they started the project weeks before Russia invaded Ukraine, a crucial decision made back in January ultimately inspired them to host a fundraiser aiding Ukrainian refugees.

Changes promote humane treatment of animals, enhance consumer protections. The Pinellas County Board of County Commissioners (BCC) on Tuesday passed a series of updates to its animal ordinance that will ban the opening of new retail stores that sell dogs and/or cats while grandfathering in existing stores. The amendments provide for new stricter regulations on commercial pet retail establishments while keeping existing requirements in effect for hobby breeders who produce no more than two litters or 20 dogs or cats per year.

The family-friendly event will run from 10 a.m. to 1 p.m. at the Lealman Exchange. Hurricane season is here, and Pinellas County will host a free Hurricane Preparedness Day event on Saturday, June 4, to provide residents with a wealth of information and resources.

Pinellas: Department of Solid Waste will no longer collect household electronics for recycling

Residents of both cities to raise awareness and funds for Alzheimer’s Association. DUNEDIN, Fla., May 23, 2022 – For the past three years, Dunedin resident Steve Olson has joined in the fight to end Alzheimer’s by encouraging local businesses and friends to help him “Paint Dunedin Purple” in support of the Alzheimer’s Association. This Alzheimer’s & Brain Awareness Month, he is bringing the fundraiser back again, and this time, he’s casting a wider net.

Pinellas County is now accepting applications to fill one vacancy on the Pinellas County Construction Licensing Board (PCCLB). This appointment will fulfill the remainder of a current term ending on Sept. 30, 2022.

This week marks the one-year anniversary of a 46-year-old Pinellas county cultural institution running into the buzz-saw of a social media giant’s algorithm-driven artificial intelligence assassin.

Funds to continue dog house program and preventative care/sterilization vouchers. Maddie’s Fund and the Michaelson Found Animal Foundation have awarded Pinellas County Animal Services a $10,000 grant for piloting the “Best Overall Effort” to open doors to adopters and volunteers and welcome the entire community during their Open Arms Challenge.

Pinellas: Water system maintenance to begin in May

Black skimmers are a threatened species of medium-sized birds in Florida |Pinellas County Government Facebook. Effort to protect species is in partnership with Audubon Florida. Pinellas County Parks & Conservation Resources, in partnership with Audubon Florida, have pre-posted a nesting area for black skimmers at the north end of Sand Key Park’s beach near the jetty. Pre-posting means an area has been marked and protected before the shorebirds begin nesting.

ABC Action News journalist Jackie Callaway |Facebook. Owner of defunct Park Auto Mall receives 10-year sentence, ordered to pay restitution. According to a press release, an investigation initiated by Pinellas County Consumer Protection led to the sentencing on Friday of a used car dealership owner who was convicted of taking customer trade-ins and failing to pay off their liens. Pinellas-Pasco Circuit Judge Pat Siracusa sentenced Fred Najjar to 10 years in prison and ordered him to pay more than $200,000 in restitution to victims and more than $100,000 in unpaid sales tax to the State of Florida.

Online survey is for all county trail users and anyone interested in the topic. Electric bikes (e-bikes) have become a common sight on Pinellas County’s multi-use trails. Their popularity grew in recent years as more people sought to get outdoors during the pandemic and bike shops had trouble stocking traditional bicycles. It has been estimated that 130 million e-bikes will be sold globally between 2020 and 2023.