If you're a fan of the abandoned, historical, and strange events and locations, then you're in the right place. I post videos and articles like what you see here every week. You can stay up to date on all my current content and updates on my YouTube channel. Link in bio.

Would you stay the night in the Hill House Manor of Texas?

Built in the mid-1850s, this home sits in Gainesville, Texas and is surrounded by trees and what seems to be a quiet neighborhood. This home has a vague history and a very unique floor plan. It gained popularity in 2004, when the new owner, Linda Hill purchased the property. No records could be found on who built the home. This home became known as the Hill House Manor.

Over the years, this manor has served a number of purposes, including a private residence, a brothel, a speakeasy and temporarily, even a set of small apartments. This manor was made famous by the legend of a gruesome murder that took place in one of the downstairs bedrooms - now called the "murder room."

The story goes that back to the time frame when the house was used as a brothel. Two men got into a fight over a prostitute ending with one murdering the other and leaving the room in a bloody massacre. Staining the floors and walls with the hatred and jealousy of one man.

This violent act is what many think has given this part of the manor a haunted hostile vibe. Maybe it was just me, but to be honest, I could feel something was not right by being around this room.

Walking through this house makes you wonder who all passed through, who all stayed here? Did anyone famous come here? If the walls could talk, what would you think they would say? 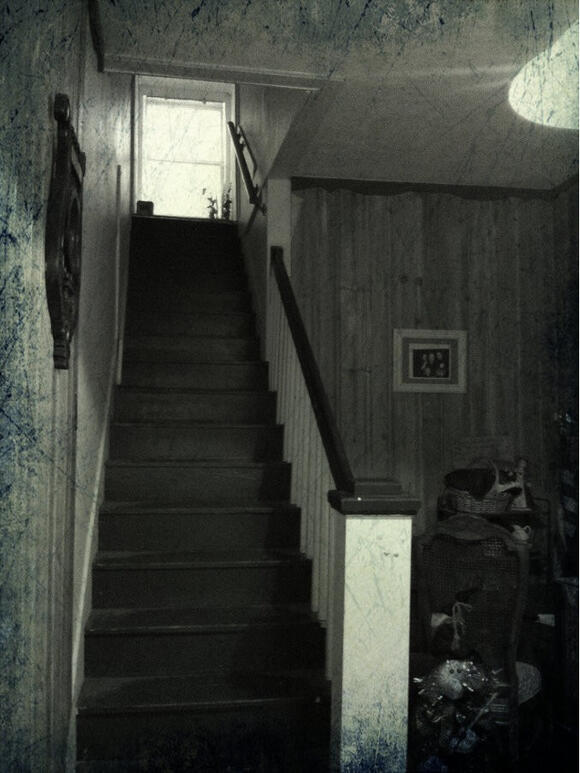 This staircase that leads up to the 2nd floor, is one of the first things you see as you walk into this home.Haunted Rooms

The manor has its own water well inside of one of the rooms, making it an unusual, but unique thing to experience in a home. The manor has a total of 13 rooms and 3 kitchens. This place has that old house smell that seems to be prevalent in old homes like this one. You leave thinking that a lot has happened here, but leaving you with many unanswered questions that are probably lost forever.

While renting the home out as a series of small apartments, supernatural occurrences started to develop. This caused tenants to break their leases.

Curious as to the cause of these supernatural occurrences, Linda opened the house up to investigations from paranormal researchers and other investigations to get an idea of what was going on in this place.

Between these experiences and the results of the paranormal investigations, there have been many who have said that there are many spirits passing through the walls of this manor.

Would you stay the night, alone at the Hill House Manor?

That does it for today's history, Hit that thumbs up Peace, I love you, and as always God bless.

If you're a fan of the abandoned, historical, and strange events and locations, then you're in the right place. I post videos and articles like what you see here every week. You can stay up to date on all my current content and updates on my YouTube channel. Link in bio.

Woman picks up Hitchhiker who turned out to be an angel, what he said was shocking.

Linda Markowitz tells her story about picking up a man on the side of the road who turned out to be an angel.And what this man said and did was pretty shocking, and the events that followed will make you really question why he was even there.

Today's story is probably one of the strangest stories I have ever told on this channel. America has seen its fair share of some pretty harsh and terrifying serial killers In the 1970s, such as, cult leader Charles Manson, The Zodiac killer, John Wayne Gacy, and Ted Bundy to list just a few.

TikTok user films what he claims to be a giant and then passes away 3 months later. Part 2

Upon many requests and reading people's comments about this case, along with watching a lot of other videos on what people are saying and showing, I figured I would just write a short article, letting y'all know that I made another video on my channel about this, going into more of the details and laying out information that I personally gathered and put it all in one video so y'all can see it and decide for yourself what really happened.

Phil Schneider was a US government geologist, engineer and probably one of the most controversial figures in the world of ufology and extraterrestrial subjects. Phil decided to shed light and knowledge on top secret information he had, along with some of the most controversial topics in history. He claimed that him coming forward with this information would get him killed... and this case would seem like this very thing happened, or did it?

Woman found living in the hotel walls, robbing people while they were away.

Victoria Rothe and a coworker were staying at a hotel while on a work trip. Then something terrible happened. After a long day of work, Victoria and her coworker Rebecca, went back to the hotel. When Victoria opened her door, she saw a woman standing in the bathroom. Victoria thought it was housekeeping at first, but when she saw the woman holding her clothes, she knew something was wrong.

A rare gold coin from the ill-fated Nuestra Senora de Atocha, the "world's most valuable shipwreck," has been discovered off the Florida Keys, as stated by Daily Mail. (See picture at bottom of article.)

TikTok user films what he claims to be a giant and then passes away 3 months later.

Andrew films a giant and claims CIA agents were following him. He passes away 3 months later. You can watch the full video by clicking link.Photo byRooted Expeditions. This is the strange and tragic story of Andrew Dawson, a TikTok user going by the name of "Andykapt." Andrew filmed what he claimed to be a giant in Canada's Jasper National Park.

Police and medical staff document America's real-life possession: Official reports claim boy, nine, walked backwards up hospital wall.Photo byDaily Mail. This story may sound like something out of a movie, but it is 100% true.

Teacher arrested after telling her students to cut themselves to rid their bodies of demons.

Henry McDaniel, stated that he shot monster 4 times before it ran away. Full story in link.Photo byRooted Expeditions. One night in 1973, in a small town in southern Illinois, just as these kids were about to go to bed, they were playing inside the living room of their home. That’s until they thought they heard something coming from outside.

This was one of the last photos taken before the Dyatlov group perished.Photo byVariety. Today's story is about a strange location and event about 10 experienced skiers who trekked up a very ridged and snowy Mountain located in Russia. Out of those 10 hikers, only 1 survived while the other 9 were found dead. The way they were found, still have people guessing and giving theories as to what could have happened. Theories range from being an alien or Bigfoot encounter to a top secret operation by the KGB. But I'm only going to show what happened and let you decide for yourself. The details of this story are only possible due to the fact that there were journal entries, along with photos taken leading up to the tragic deaths.

Firefighters and Riverside Police gather outside a burned home in Riverside, Calif., on Nov. 25, 2022, following a house fire. Three bodies.Photo byYahoo. After killing her family, a former Virginia state trooper is accused of kidnapping a California young girl he had been catfishing online, according to investigators. According to the authorities, Austin Lee Edwards, 28, traveled more than 2,500 miles across the nation to meet the teen on Friday in Riverside.

The "Holy Grail" of ships found, with cargo worth $17 Billion.

The San Jose Galleon or also known as the “Holy Grail”, Was Discovered in 2015 with $17 Billion Cargo.Rooted Expeditions. In 2015, a man using a robot submarine discovered a shipwreck in the Caribbean Sea with a cargo thought to be worth as much as $17 billion. They would soon find out that they discovered the abandoned and lost ship called, the San Jose Galleons. Where is the ship? And what did they do with all that treasure? Hi I’m Zach, and welcome to Rooted Expeditions, hit that thumbs up and let’s dive right into today's story.

What really happened with the Philadelphia Experiment?

The USS Eldridge (seen in 1944) was allegedly the site of some U.S. Navy experiments in time travel.Photo byHow Stuff Works. The Philadelphia Experiment. Did it really happen? Was it a government cover up? Or just a really good fiction story that makes up for a really good sci-fi film? Today we are going to dig into the story behind the USS Eldridge and what is said to have happened in 1944. From a ship completely disappearing to ship members being fused to the ship. This story has been around for a long time, but always seems to be pushed into the dark.

Abandoned church hidden in the woods.

The Anchorage Mansion. ( Picture shot from the driveway 2021)Rooted Expeditions. Imagine waiting 10 years to move into your dream home. Day by day watching it slowly being built from a distance, saying to yourself that one day you will be calling this beautiful mansion your home - only to move in and die three years later.

The abandoned baseball field in Fort Worth, Texas.

LaGrave Field in Fort Worth, Texas sits abandoned.Rooted Expeditions. Today we are going to look into the history of this iconic, abandoned baseball field that sits in Texas. What's the story behind this place? Why is it abandoned? Hit that thumbs up and let's dive right into today's location.

The abandoned mansion in Sanger, Texas is finally being restored.

The front of Bella Mansion that sits off the west side of HWY i 35.Rooted Expeditions. Today we are going to take a step back in time to dig up the history of a beautiful mansion, peeling back the walls to know what happened in this 24,000 square foot home. Why did this mansion sit abandoned for so long? What are the future plans for this place? Will it be torn down or completed? Stick around to find out.

Man claims to have shot this monster breaking into his home.

Henry McDaniel, claimed to have shot and wounded monster breaking into his home in 1973.Rooted Expeditons. Today's story might sound fake, but is 100% true. While horror movies can surely keep us on our toes or even terrify us. It’s the true scary stories from history that really digs down deep within us and just seem to stay there. Whether it's true crime, paranormal or just something so strange and unexplainable.