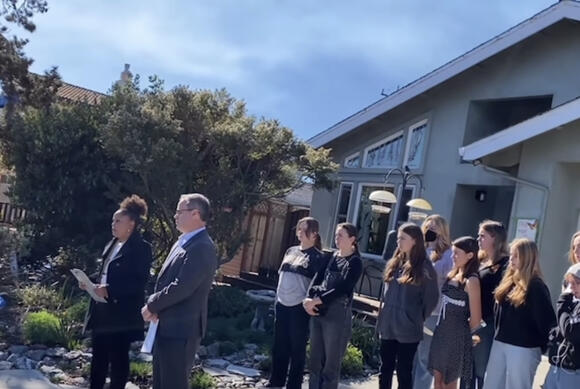 The full press conference can be seen here.

“Mayor Brunner and I, like the rest of the community were shocked and horrified, watching the video of Maya and Sebastian Laing, being ripped out of their grandmother’s home by a private transportation company linked to a for-profit reunification center in Los Angeles,” Connery said while standing in front of a group of friends and family.

“Anyone who saw that Instagram post was deeply disturbed and when it was brought before me, it was absolutely horrifying at the hands on removal and the trauma that was being experienced at that moment ” Mayor Brunner said.

The Mayor and Supervisor said they were contacted by the community who were shocked this has happened in Santa Cruz.

“Watching that and having no control over it was really hard,” Brunner said.

Both made clear that the City nor the County had anything to do with the reunification center or the transportation company as the orders are given by judges.

“We are here today to talk about what we see as policy failures of the treatment of Maya and Sebastian,” Coonerty said. “We have an obligation to speak for them and other kids who are potentially at risk.”

Coonerty said the violent force used by the transportation company was completely unacceptable and that they are available to support the family having gone through this traumatic experience.

Both Mayor Brunner and Supervisor Coonerty said they will be looking into ways to stop this kind of incident from happening again in the future.

“This should be ever happen in Santa Cruz or anywhere else ever,” Connerty said.

Financial support for California crime victims been declining for years

(Sacramento, Calif.) U.S. Representative (CA-28) Judy Chu of Monterey Park, told NBC News that there is going to be a lot involved in the recovery of the 11 victims and their families who were killed in a mass shooting on Lunar New Year.

Petition with 11,000 signatures calling on Stanford to reprimand or terminate Professor Michele Dauber. (Sacramento, Calif.) Standard University is not investigating law professor Michele Dauber for comments made on Twitter that some people are calling harassment and sexist, according to Stephen Chen, Stanford Title IX Coordinator.

Scene of a separate police incident in Sacramento on December 20, 2022.Photo by(Public Safety News) (Sacramento, Calif.) A man was arrested Wednesday morning after firing a gunshot at and a brief standoff with Sacramento sheriff deputies at a South Sacramento residence, according to the sheriff’s office.

CHP investigating on Interstate 5 near Sutterville Road where a Sacramento detective hit and killed two men on Tuesday, December 6, 2022.Photo by(KCRA 3) (Sacramento, Calif.) Since September 2021 four Saramentans have been senselessly killed by homeless people, during the same period Sacramento law enforcement has killed the same number of people in traffic collisions alone.

San Francisco’s plan to limit traffic stops revised, to be voted on at later date

A California Highway Patrol cruiser at the State Capitol on June 11, 2021.Photo by(Robert J Hansen) (Sacramento, Calif.) A new policy would ban San Francisco police from making traffic stops for several low-level infractions, according to a report on a new traffic enforcement policy released yesterday by the Police Commission.

San Francisco approves police to use lethal force with robots

(Sacramento, Calif.) The San Francisco Board of Supervisors approved the police department’s ability to use potentially lethal force using remote-controlled robots on Tuesday.

Ally Cable sharing her experience with Family Bridges’ reunification camp via TikTok on April 29, 2022.Photo by(CJEYouthSpeak) (Sacramento, Calif.) When Ally Cable was 16, she and her younger sister were taken from their mother and flown to Montana where they were subjected to a Building Family Bridges reunification therapy in a hotel for four days.

David Murdoch (left) watching as Santa Cruz police restrain his daughter, Brooke Murdoch, against her will in June 2021.(YouTube) (Santa Cruz, Calif.) The following is from late June 2021, showing Santa Cruz police officers forcibly take thirteen-year-old Brooke Murdoch from her mother after a judge ordered the teen be taken to Sonoma based psychologist Rebecca Bailey for “connection-focused therapy,” with her father.

Actions taken after public outcry over children forcibly taken from their grandmother’s home. Maya and Sebastian Laing(Instagram) (Santa Cruz, Calif.) After public outcry for two children forcibly removed from their grandmother’s home last month, The Santa Cruz Board of Supervisors passed a directive for the Department of Human Services to work with the County Counsel to determine potential options to regulate the actions of private youth transport companies who are hired to remove children from their home.

Four out of five states ban slavery as criminal punishment

(Courtesy of Donta Williams) Unhoused resident Donta Williams was displaced from a homeless encampment on Stockton Boulevard in February 2021 which he publicly spoke about at a 2021 city council meeting.