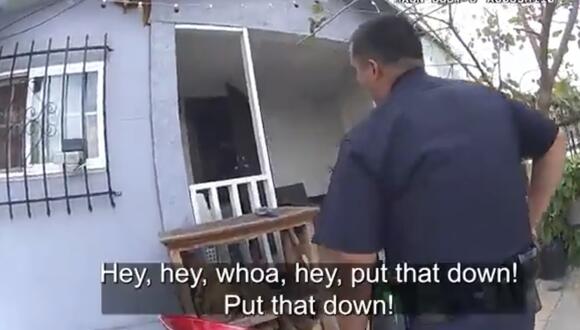 Body cam video of an officer involved-shooting where a 19-year-old with an airsoft gun was shot and killed on Saturday, September 17, 2022.(LAPD)

The Attorney General’s Office announced last week that it is investigating an officer involved-shooting (OIS) that occurred in Los Angeles on September 17 where a 19-year-old holding an airsoft gun that looked like a rifle was killed.

The OIS incident resulted in the death of one individual and reportedly occurred as officers with the Los Angeles Police Department (LAPD) responded to a call for assistance at a residence.

According to a press release, after being notified by local authorities, the California Department of Justice’s California Police Shooting Investigation Team for Southern California deployed to the scene of the incident.

The Los Angeles Police Department released body can foo from the incident which can be seen here.

The officer involved was Officer Luis Navarrete according to an LAPD press release.

According to LAPD, its Southeast Division patrol officers responded to a radio call of a family dispute at a residence in the 400 block of West 102nd Street.

“As the officers approached the residence, a man, later identified as 19-year-old Luis Herrera, came out the front door holding what appeared to be a black rifle,” the statement said. 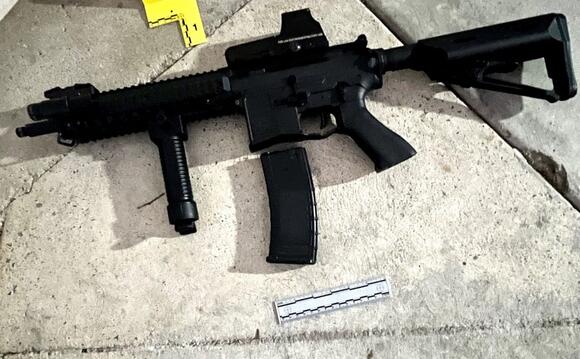 Air-soft gun that resulted in an officer involved-shooting where a 19-year-old was killed on Saturday, September 17, 2022.(Courtesy of the LAPD)

It was later determined Herrera was holding an airsoft gun.

Officers gave Herrera commands to drop the rifle, however, Herrera did not comply.

LAPD claims Herrera shouldered the rifle and pointed it at the officers, resulting in Officer Navarrete shooting and killing the 19-year-old.

“Herrera was struck by gunfire and fell to the ground,” the statement said.

No one else was injured as a result of the incident according to police.

Herrera’s family has yet to be reached for comment.

This is an ongoing investigation and will be updated if more information is obtained.

Ally Cable sharing her experience with Family Bridges’ reunification camp via TikTok on April 29, 2022.Photo by(CJEYouthSpeak) (Sacramento, Calif.) When Ally Cable was 16, she and her younger sister were taken from their mother and flown to Montana where they were subjected to a Building Family Bridges reunification therapy in a hotel for four days.

David Murdoch (left) watching as Santa Cruz police restrain his daughter, Brooke Murdoch, against her will in June 2021.(YouTube) (Santa Cruz, Calif.) The following is from late June 2021, showing Santa Cruz police officers forcibly take thirteen-year-old Brooke Murdoch from her mother after a judge ordered the teen be taken to Sonoma based psychologist Rebecca Bailey for “connection-focused therapy,” with her father.

Actions taken after public outcry over children forcibly taken from their grandmother’s home. Maya and Sebastian Laing(Instagram) (Santa Cruz, Calif.) After public outcry for two children forcibly removed from their grandmother’s home last month, The Santa Cruz Board of Supervisors passed a directive for the Department of Human Services to work with the County Counsel to determine potential options to regulate the actions of private youth transport companies who are hired to remove children from their home.

Four out of five states ban slavery as criminal punishment

Two properties formerly owned by Glenco Properties Group Corp. lost via tax lien sales.(Herald-Tribune) (Sacramento, Calif.) A real estate company is suing the man and two mortgage lenders who seized 21 of its properties after it failed to file its annual reports with the Florida Division of Corporations in 2020 and 2021 and was administratively dissolved, according to Sarasota County court records.

(Courtesy of Donta Williams) Unhoused resident Donta Williams was displaced from a homeless encampment on Stockton Boulevard in February 2021 which he publicly spoke about at a 2021 city council meeting.

Jury hung in the police shooting and killing of Darrell Richards

Judge declares mistrial and attorneys say they will be retrying case. Darrell Richards’ mother, Christine Vang speaking about how police killed her son on Monday, October 31, 2022.(Voices of Strength)

Friends and supporters of Maya Laing protesting in from of a Santa Cruz courthouse on Friday, October 28, 2022.(Courtesy of Tina Swithin) The day before Maya Laing and her brother Sebastian were taken against their will to a court-ordered reunification camp, Maya filed a temporary restraining order against her mother.

Maya Laing taken by transporters from a family home on Thursday, October 20, 2022.(Courtesy of Tina Swithin) Two Santa Cruz children were physically removed from their aunt's home by “transporters” and taken to a reunification camp by court order last Thursday, according to a video found on social media.

Douglas “Chief” Stankewitz, 60, in a Fresno Court and waiting for the AG’s response, if he’ll be released after 43 years in prison.(The Fresno Bee) Almost two weeks ago, a California judge ordered the state of California and the Attorney General’s Office to show cause why the murder conviction, and the inmate who has served 43 years of a life sentence, should not be overturned and therefore released.

“Then he had the audacity to handcuff my husband after he shot him,” wife says. Daughter and granddaughter of Jaime Naranjo, who was killed by a Sacramento Sheriff’s deputy last week, at a press conference, Oct. 4, 2022.Photo by Robert J Hansen.

Can slumlords whose properties habitually damage other peoples homes be prevented?. Damage to Rachel Buller’s condo which was damaged by an upstairs unit in Sacramento in 2021.(Courtesy of Rachel Buller)

A Ukrainian soldier near a nuclear power plant. The Ukraine war has rekindled the dangers of nuclear plants coming under attack.(University of California Press) The war in Ukraine now has a nuclear power plant caught between Russian and Ukrainian forces which has increased fears of radiation poisoning causing a surge in demand for potassium iodide tablets and other similar protective solutions from radiation exposure.