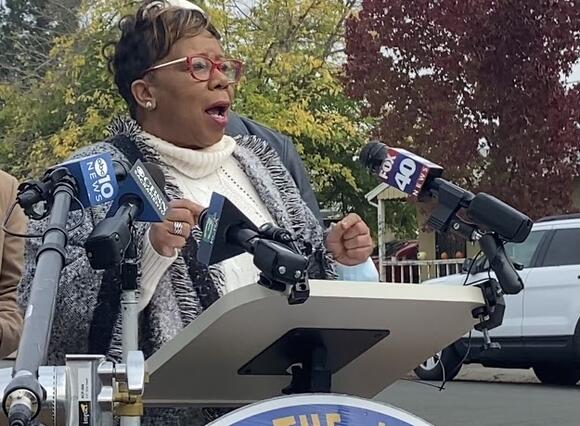 The Sacramento NAACP and other supporters of Dr. Elysse Versher, the West Campus High School vice principal targeted by acts of racism and hatred by students, called for a criminal investigation into the matter.

Versher explained to the NAACP in her complaint form, that for the past three years she had been subject to overt racist and aggressive behavior from students and parents according to Williams.

“It’s horrific but I’m gonna say it. Students referred to her as Black n****, Black b****, Black Hitler and writing n**** five times on the wall near the vice principal’s parking space,” Williams said.

Williams said that the principal and administration told Versher when she went to them for help, that students have the right to write those words on the wall.

“It wasn’t until the community came together and said ‘We have had enough,’” Williams said.

Williams said that Superintendent Jorge Aguilar has not implemented the policies already in place to prevent incidents such as these from occurring.

“Why are you waiting for a crisis to happen?” Williams said. “I’m asking for a full investigation.”

Toni Tinker, vice chair of the African American Advisory Board (AAAB) for Sacramento City Unified School District, said the AAAB is taking swift action to effect immediate change regarding the most recent of many incidents of racial amd emboldened attacks towards students, families, staff and administrators of African decent,” Tinker said.

“There’s a lot of damage and a lot of brokenness that has come along the way,” Tinker said.

Tinker said the culture at West Campus is not necessarily due to Superintendent Aguilar who is not a Sacramento native and stepped into this environment but that Principal McKeekin is culpable for this situation.

“Where did it go once this principal knew? He didn’t take any actions to protect the vice principal. So here we are,” Tinker said.

McMeekin sent a letter on Tuesday to parents and families of West Campus students alerting them of the incidents. “We have much work to do as a community in order to heal from this.”

Darryl White, representative of the Black Parallel School Board (BPSB), said incidents of racial hatred and discrimination are not new to Sacramento schools have happened many times in recent years.

The BPSB is a community organization developed to work parallel to the Sacramento City Unified District Board of Education.

“White parents have always negotiated their discipline if they did not like the suspension or possible expulsion, regardless of what their kids did. They have routinely pushed back that I'm the principal and VP in charge of that discipline,” White said.

Parents in the community too often are silent on the actions of their children and is an attitude that the community has embraced which has created an “exclusive environment,” translating to privilege.

“Exclusive environments translate to privilege. People believe they are privileged and those that are privileged think they can do anything they want,” White said.

“White parents of this community are going to have to, for the first time, take some responsibility for what their kids say and do,” White said

CEO of the California Black Chamber of Commerce, Jay King, said the entire community needs to come “eyeball to eyeball with the truth.”

“It’s difficult for us to be human with people that we don’t necessarily understand. More than the problem, the solution sits right here today. We have to get to the space where we can have an honest conversation where we can talk about the things that we like and dislike about each other,” King said. “But today we have to have that honest conversation.”

Families and elected officials speak out against CPS at the Capitol

A sign made by an attendee of the “Crush CPS” rally at the Capitol building in Sacramento on January 18, 2021.(Photo by Robert J Hansen) Hundreds of people from around the state showed up at the California State Capitol to bring awareness to the harm Child Protective Services (CPS) have caused children and their families today.

(Image courtesy of The Justice Coalition Reform) The Justice Reform Coalition (JRC) is one of many organizations gathering for a “Crush CPS” rally at the Capitol building in downtown Sacramento on Tuesday morning.

Sacramento to vote on spending ARPA funding on community investment

The old Sacramento City Hall building downtown.(Photo by Robert J Hansen) At tonight’s meeting, the Sacramento City Council will vote on several investments of American Relief Plan (ARPA) funding aimed at improving safety citywide according to a press release from the Mayor’s office.

Top ten most read stories by Robert J Hansen of 2021

Images from the top ten most read stories by Robert J Hansen in 2021.(Robert J Hansen) 1. Unhoused man and wheelchair user says Kaiser released him against his will 85K+ page views.

Eric Guerra and his wife Christina with one of their sons January 2022.(Photo courtesy of Eric Guerra) Sacramento City Councilmember Eric Guerra announced yesterday that he is running for newly redrawn California Assembly District 10 according to a press release.

Suspect arrested after racing around downtown from police. The suspect being taken to the hospital after an encounter with a Sacramento PD K9 on January 1, 2022.(Photo courtesy of Public Safety News)

Motel 6 kicks out pregnant woman days before she gave birth

The woman was utilizing Sacramento’s motel voucher program. Jessica Gilbert holds her newborn son Joseph in October 2021. Joseph is in the custody of Child Protective Services.(Photo courtesy of Jessica Gilbert)

Lawsuit being prepared against Sacramento for towing RVs on Commerce Circle

Vehicles being towed from Commerce Circle in North Sacramento on August 2, 2021.(Photo by Robert J Hansen) A lawsuit is being prepared against the City of Sacramento for the unlawful seizure of approximately 18-20 vehicles that were towed and impounded by code or law enforcement according to a letter to the Department of Community Response.