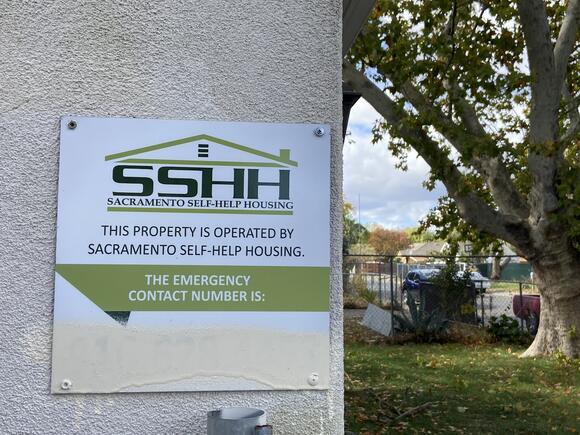 The property operated by Sacramento Self-Help Housing where David Andre has lived for about three years on Monday, October 25, 2021.(Photo by Robert J Hansen)

A house manager with Sacramento Self-Help Housing (SSHH) intimidated and threatened another resident David Andre, after moving in only the day before.

Anthony, the house manager, told Andre he was in charge and was going to make sure he knew that.

“You’re going to learn who I am,” Anthony said according to a police report made by Andre.

Anthony also claimed to have worked with SSHH since 2009 and was there to ‘correct problems’ and does so regularly.

Anthony declined to comment or give his last name.

Andre was talking to a local housing advocate and friend, Erica, so they could document the living conditions when the house manager began shouting at both of them.

The house manager then advanced towards Andre making aggressive hand movements and stopping only after Erica stepped in between Andre and the house manager fearing for Andre’s safety.

“He started making these chopping moves at me and then clapped a bunch of times at me,” Andre said. “I didn’t feel safe so we left.”

Both Andre and Erica were shaken up after the incident, the end of which can be found on Facebook live.

Andre has lived at the South Sacramento home for nearly three years and there has not been a house manager for nearly a year.

“They don’t provide services to us or anything and if this guy is doing this here how many other places is this happening at?” Andre said.

A letter was sent to SSHH, notifying it about the incident and that Andre no longer feels safe in the home.

David does not feel safe going back to a house with a manager that has shown aggressive behavior and complete disregard for his personal space while also using intimidation and veiled threats according to the letter.

“They sent him here to silence me about how bad it is here. There was a guy a while back who brought guns and drugs in the house and they (SSHH) didn’t remove him or do anything about it,” Andre said.

Andre is concerned that he will become labeled ‘resistant to services’ and no longer have a place to live.

Once someone is considered resistant to services, they no longer are eligible for County or City housing services.

“I don’t know what to do because I’m on social security and can’t afford anywhere else to live,” Andre said. “They need to bring in a house manager that wants to help people.”

Andre left his home Sunday and returned the next day, having slept in his truck that night.

SSHH was unable to be contacted at the time of publication.

Woman shot in the face while pregnant by father of the child survives, CPS trying to take her parental rights from her

Henry Ortiz (left), activist Allegra Taylor (center), Tina Perry (right) and other demonstrators at the California Capital building on Novem(Photo by Robert J Hansen) A demonstration was held at the Capital yesterday for Harvest Davidson, who has been in El Dorado County jail since 2016, by his mother, friends and activists calling for an investigation into the El Dorado County Sheriff’s department for the mistreatment and abuse of inmates.

There is an update on this story which can be found here. Image on left, Isaiah Herndon (Courtesy of Berry Accius) Image on right, Inside Isaiah Herndon’s Reno apartment after Reno police shot him.(Image by Robert J Hansen)

Sacramento NAACP President Betty Williams at West Campus High School in support of Vice-Principal Dr. Elysee Versher on November 12, 2021.(Photo by Robert J Hansen. The Sacramento NAACP and other supporters of Dr. Elysse Versher, the West Campus High School vice principal targeted by acts of racism and hatred by students, called for a criminal investigation into the matter.

Sacramento police at the scene after a pursuit that began as a burglary in progress at a Sacramento marijuana dispensary.(Photo courtesy of Public Safety News) Cannabis businesses in Northern California have been experiencing a rise in burglaries and robberies for the past few weeks according to cannabis policy advisor Jacqueline McGowan.

Family of Edward Johnson, 76 year-old who died of COVID-19 while in Sacramento jail, speaks out

Sacramento councilmember says SacBee opinion one sided and misquoted him

Samual Nathaniel Brown on graduation day in California State Prison, Los Angeles County on Oct. 5, 2021.(Photo by Robert Huskey/Cal State LA) On October 5, 2021, Samual Nathaniel Brown, co-founder of the Anti-Violence Safety and Accountability Project (ASAP), creator of the 10P program, and author of the constitutional amendment proposal, The California Abolition Act (ACA 3), recently became one of the first along with 24 other men to graduate with a bachelors in communication from Cal State LA’s Prison B.A. Graduation Initiative on the yard at California State Prison Los Angeles County in Lancaster California.

“They made her homeless,” San Joaquin deputy DA says about Sacramento woman’s home taken by City

Wanda Clark is a victim of elder abuse and made homeless by the City supporters say. Wanda Clark locks the door of her home that is to be auctioned off next month on October 5, 2021(Photo by Robert J Hansen)

The possessions of a homeless person on Capitol Mall Drive in Sacramento on Saturday, September 11, 2021.(Photo by Robert J Hansen) Wages and supply of affordable accessible housing.